The casting of William Hurt as General ‘Thunderbolt’ Ross in the first MCU movie, The Incredible Hulk, was a huge get for the newly formed Marvel Studios at the time. Hurt’s General Ross played a significant part in MCU movies like Captain America: Civil War, as a kind of antagonist. With Hurt’s passing in March 2022, the world lost a great actor. And with him, any possibility of the character reappearing in future MCU movies. But there is a new rumor about Harrison Ford in Thunderbolts, the new MCU movie named after the character himself.

Thunderbolts is a new movie that is almost like Marvel’s version of Suicide Squad. A group of anti-heroes and villains commissioned by the government to go on assignments to protect America’s interests. In the comics, the group’s name came from General ‘Thunderbolt’ Ross himself, given he was their handler. With the new movie still planned to release, despite Hurt’s death, the rumor of Harrison Ford in Thunderbolts kind of makes sense. 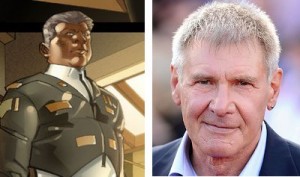 As reported by Jeff Sneider, an entertainment journalist on Twitter, the rumor suggests that the Indiana Jones 5 actor was Marvel’s first choice for the recast. Sneider does admit that it’s unclear if there have been direct conversations with Ford as of yet. Or if he actually passed on the role or not. He also confirms that many Marvel insiders actually deny the report. But Marvel has a long history of denying things that end up happening. Some examples include Tatiana Maslany denying she was cast as She-Hulk until the official confirmation, and Andrew Garfield lying to the world for a whole year about being in Spider-Man: No Way Home.

Harrison Ford in Thunderbolts is a very interesting idea. The Star Wars icon would be the right age and look for the character. And Ford has shown his ability to play the grumpy bossy character archetype many times in movies like Blade Runner 2049. What’s most exciting about this is that General ‘Thunderbolt’ Ross in the comics eventually becomes Red Hulk.

Red Hulk is a more intelligent and in-control version of Hulk himself, initially created to fight Hulk. However, over time the character becomes a good guy, even joining the Avengers at one point. It’s intriguing, to say the least. Harrison Ford in Thunderbolts could eventually lead the way to us getting Red Hulk in the MCU! While I would say that Ford may not want the role due to the potential physical demands, the man is coming back for Indiana Jones 5, at the age of 80. So anything is possible! Especially seeing how much of She-Hulk is in CGI, I doubt Ford as Red Hulk would require much physical stunt.

The Thunderbolts will release in hit theatres in 2024.