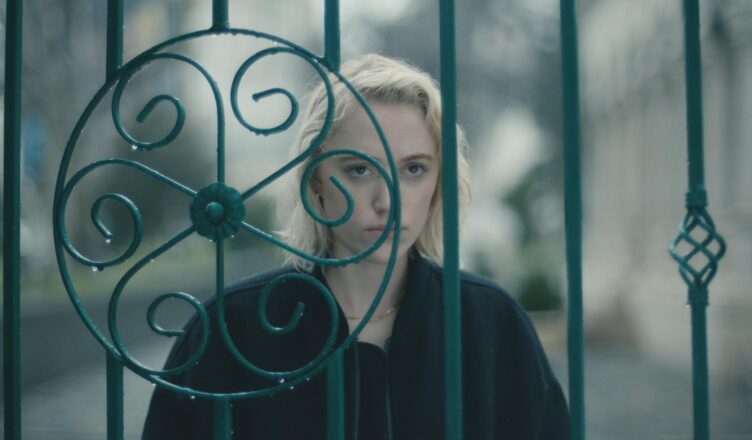 Maika Monroe, the blonde star of “It Follows” (2014), has 33 credits, to date. I first became aware of her work in “Hot Summer Nights” at SXSW in 2017, when shooting on the Red Carpet with many young actors who were about to become stars (Timothy Chalamet, for one) lounging about. She was good in that film, although that movie was not as good a vehicle as “Watcher” in Austin at SXSW in 2022. Since then, I have made a point of trying to catch other films among her 33 credits.

This is a good one to start watching this actress. She carries this entire spooky, atmospheric film on her slim shoulders and does a great job.

Maika plays the lead character Julia, who is the wife to Francis (Karl Glusman). The couple has recently relocated to Bucharest, Romania for Karl’s marketing job. This movie makes his fluent command of the native tongue very useful in his marketing position (His mother was Romanian). Julia is studying the language but is just a beginner. Karl frequently works late, sometimes as late as 10 p.m., or works on overnight presentation jaunts. This leaves Julia all by herself in a strange country and city, surrounded by (primarily) Romanian speakers.

The first scene shows Maika riding in a cab to their apartment. As the opening proceeds, Writer/Director Chloe Okuno, in collaboration with Cinematographer Benjamin Kirk Nielsen pulls the camera back to show the young couple on the couch of their living room, panning out to the street outside to watch the couple through the window as they get cozy on the couch. A nice cinematic touch for the aptly named “Watcher.”

This entire film is about watching. But, the watching is by a creepy-looking guy who lives across the street from the young couple. Or is it? Tension builds nicely through appropriately tense pounding music (Nathan Halpern) early in the film. The city, itself, often rainy and dark, is a character. You automatically feel isolated and alone When you are a non-native speaker who does not speak nor understand the language. Add in Francis’ (Karl Glusman’s) busy work schedule and Julia is alone for long stretches of time. She knows no one but does meet the girl who lives next door, Irina (Madalina Anea), primarily because the walls are so thin that noises carry well between the two apartments.

Madalina Anea as Irina, the next-door neighbor, is a pole dancer in the area, which makes one wonder about the wisdom of selecting this particular part of the city in which to locate. I could relate to the “watching” out the window at all hours. When on a trip to Europe, via Eurailpass, we unwisely spent one night near the train station in Frankfurt, which turns out to be the Red Light district. We watched “the girls” going off to work beginning at 4 p.m. and returning at the break of dawn. We were too afraid to leave our seedy hotel to even venture out for food. When we try to take a picture of one of the working girls on the streets, she is definitely unhappy. She gives us short shrift in guttural German. Note to self: it’s not a good idea to be a woman, alone, in a seedy part of the city.

Coincidentally, there is a serial killer known as “the Spider” who is on the loose at the time the young couple has relocated to this forbidding, gloomy old city. “The Spider” has murdered at least four women. He decapitated at least two of them.

The part of “the watcher” from across the street, reminiscent of “Rear Window’s” plot, is well-played by actor Burn Gorman. For most of the film, we are left to decide for ourselves if Julia is panicking unnecessarily or if she has a legitimate concern when she thinks “the Watcher” is following her in a supermarket or when she encounters him on the subway. After all,  he lives in the neighborhood. Do these chance meetings make him a bad guy or a misunderstood social isolate who lives with his elderly father?

Julia’s mate, Francis, (in addition to having a name that hasn’t been popular in the U.S. for men since about 1902), can be an insensitive clod at times. He makes a tasteless joke about “the Spider” keeping his wife company because he is so busy at work at a social gathering with his bosses and their wives. By now, Julia has learned enough Romanian to “get” the joke. She is not amused. He tells his increasingly frightened young wife, at one point, “So I should just jump to the craziest conclusion, like you?”

Imagine if the boy who cried wolf in that well-known story was then attacked by wolves. What would happen? Would he survive? Would he have been ignored for so long that help came too late? This film from an Abu Dhabi backer, Image films (and Spooky Films), answers that question in this indie film written by director Chloe Okuno in collaboration with Zack Ford and directed by Okuno.

The movie premieres in theaters on June 3, 2022. This is one film at SXSW that did not stream at all during the 2022 SXSW Festival. It is worth the trip to the Cineplex, which I made. It’s a well-done chilling entertainment of the sort that “Wait Until Dark” or the more recent “Kimi” provides, with excellent music, cinematography, acting, and writing in the service of a chilling well-paced story.