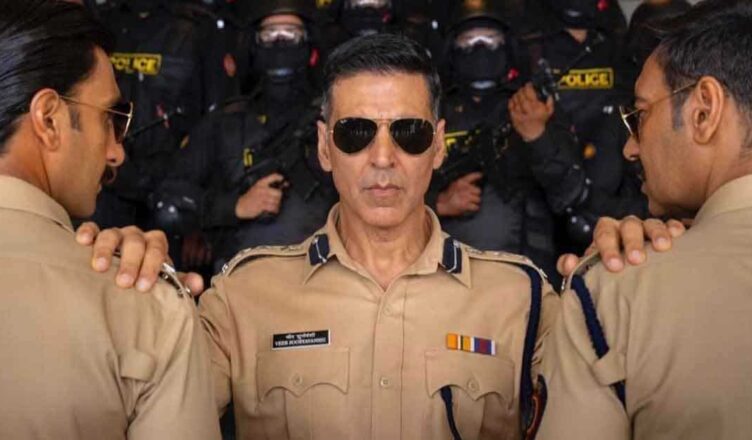 “An eye for an eye makes the whole world blind” is a popular quote by the Father of the Indian Nation, Mohandas Karamchand Gandhi who is popularly known as Mahatma Gandhi. Based on this quote, Bollywood has come out with a police action drama titled “Sooryavanshi”. Written and directed by Rohit Shetty, Sooryavanshi is a direct slap to the face of the terrorist organization “Lashkar-e-Taiba”. Starring Akshay Kumar as the fearless Deputy Commissioner of Police (DCP) of The Anti-Terrorism Squad (ATS), Veer Sooryavanshi, the movie makes a blast over Netflix.

“Lashkar-e-Taiba” is a notorious terrorist organization founded by the dreaded terrorist Omar Hafeez a.k.a Hafiz Muhammad Saeed. The organization has created havoc all over the world especially in India with mass bombings. Bollywood‘s veteran actor Jackie Shroff plays the role of Omar Hafeez in Sooryavanshi. Hafeez’s partner in crime, Bilal Ahmad is played by Kumud Mishra in this movie. The Bilal Ahmad character played by Mishra signifies the most feared underworld don of all time, Dawood Ibrahim.

The incidents shown in Sooryavanshi are based on the disastrous 1993 bombings in the city of Mumbai in India and also on the 2008 Mumbai attacks. The character of DCP Veer Sooryananshi is inspired by the daredevil Indian police officer Vishwas Nangre Patil and his contributions to countering the 26/11 terrorist attacks on the Taj Hotel in Mumbai. However, the incidents shown in Sooryavanshi are entirely fictitious and have no resemblance to reality. This is just another spiced-up police action drama that has emerged out of Rohit Shetty’s wild imaginations!

The story opens showing the 1993 Mumbai blasts where a married couple got killed. Further, we see the mastermind of the 1993 bombings, Bilal Ahmad (Kumud Mishra), escaping to Pakistan where he sought refuge along with Omar Hafeez (Jackie Shroff).

Thirteen years passed. One of these sleeper cells was Omar Hafeez’s son, Riyaaz Hafeez (Abhimanyu Singh) who was hiding in the city of Jailsalmer in India with a fake Hindu identity of a Rajbir Rathod. He opened a hotel business in the city, married a Hindu woman and even his wife didn’t have any idea who he actually was! In fact, Riyaaz had control of the 40 sleeper cell terrorist network as he was their boss and point of contact in India.

The Joint Commissioner of Police Kabir Shroff (Jaaved Jaaferi) called the Chief Minister of Maharashtra (Uday Tikekar) to the ATS headquarters in Mumbai. Shroff revealed to the Chief Minister about Riyaaz Hafeez hiding as Rajbir Rathod in Jaisalmer.

The scene moves to Jaisalmer. DCP Veer Sooryavanshi is on the track for Riyaaz outside his hotel. He and his team conduct an encounter. Riyaaz escaped and DCP Sorryavanshi followed him. A violent one-on-one fight endured between Riyaaz and Sooryavanshi until Sooryavanshi was able to nab him and bring him to Mumbai.

After Sooryavanshi interrogated Riyaaz in his lock-up and went to have a chat with his boss Kabir Shorff, Shorff told him that these terrorists had brought 1 ton of RDX to India. They had used 400 kilograms of the RDX in the Mumbai blasts. Now 600 Kilograms remain somewhere hidden in the country. Upon hearing this Sooryavanshi told Shroff that both his parents had died in the 1993 Mumbai blasts and he, in fact, is the son of the couple who was killed at the start of the movie. Sooryavanshi planned to track all the hiding sleeper cells.

Meanwhile, the story moves to Sooryavanshi’s personal life. It shows how Sooryavanshi met his present wife Ria (Katrina Kaif) who was a doctor. He got injured during one of his police encounters and Ria treated him at her hospital. That’s how they fell in love, got married, and had a son named Aryan (Vidhaan Sharma). Once, while Sooryavanshi had gone on an outing with his family, he came upon some goons in a car at a mall’s parking lot. He charged toward the goons with his car and shot them till their car overturned. However as the goons fired back at Sooryavanshi, Aryan got shot as well. The doctors were able to save Aryan and the angry Ria left Sooryavanshi saying that he didn’t bother his family and only his duty was his top priority! The present scene showed Ria planning to the movie to Australia with Aryan while Aryan was reluctant to go as he wanted his mom and dad to be together.

There was an Islamic priest by the name Kader Usmani (Gulshan Grover) who happened to be the local point of contact for Riyaaz as well as all the other sleeper cell terrorists. Sooryavanshi knew this and summoned Usmani to his office and warned him that he is going to arrest him as soon as he finds evidence against him.

Meanwhile, Bilal arrived in India from Pakistan to retrieve the remaining 600 kilograms of RDX that he and Usmani had hidden somewhere. Usmani and Bilal along with their terrorist group went to an isolated building and removed the RDX which was buried underground inside that building. They were planning to conduct bombings across various locations in Mumbai with that RDX.

However, Bilal had come to India after a long time! He was desperate to visit his mother’s grave. So, he requested Usmani that he desired to go to Mumbai to pay respect to his mother’s grave before he leaves for Pakistan. Usmani was reluctant on the matter because he knew that if the police catch Bilal, all their plans will go in vain! However, he gave in to Bilal’s requests for the sake of their long-standing friendship.

As Bilal was offering his prayers at his mother’s grave in Mumbai, he was spotted by Sooryavanshi’s team members who informed him immediately. Sooryavanshi and his police team captured Bilal in his hotel room. Before committing suicide in front of them, Bilal told them that he conducted the bombings to seek revenge upon the Indian people as his family was killed in a riot when he used to reside in India.

Later, Sooryavanshi was informed about a taxi driver named John (Sikander Kher) who had been hired by Bilal when he came to India. John had escaped to Bangkok and was hiding there. Sooryavanshi captured John in Bangkok after a long chase, and learned that Bilal and Usmani had met some unknown man near the outskirts of Goa in India. Meanwhile, Riyaaz managed to escape from police custody after some of his men triggered an explosion at the prison to set him free.

This time Sooryavanshi arrested Usmani and started interrogating him. But Usmani was a tough guy and was not ready to blurt out anything. So, Sooryavanshi devised a fool-proof plan and pretended to torture Usmani’s wife and daughter to make him confess the details about the RDX and the terrorists. Seeing the plight of his wife and daughter, Usmani decided to tell everything. He told Sooryavanshi that he was supposed to meet Riyaaz in his aide Rafique’s (Asif Basra) house.

In order to nab Riyaaz, Sooryavanshi sent Usmani along with his police team to that location. The police team positioned themselves under the building while Sooryavanshi’s subordinate officer, inspector Ashish Tambe (Ashish Warang), went inside with Usmani. Suddenly, Usmani and Rafique sat on their knees and started offering their prayers to the lord. Seeing this, inspector Tambe was taken aback and asked them why they were doing so. Before he could make any sense out of all this, a bomb in the room blasted killing them all! It turned out that the bomb was deliberately planted in Rafique’s room by Usmani and his terrorist group to commit suicide if the police caught them. Sooryavanshi and his family mourned the death of inspector Tambe.

Finally, Sooryavanshi identified Riyaaz’s aide Mukhtar Ansari (Nikitin Dheer) with the help of Usmani’s daughter. Mukhtar Ansari was hiding in Shivgarh disguised as a Hindu garage owner named Vivek Shastri. He too had married a Hindu woman. His wife, who had no idea about her husband’s identity, came across him discussing terrorism plans with Riyaaz and his group. Riyaaz killed her in order to protect their identity. Ansari was a terrorist but he loved his wife. However, he had no say over his leader Riyaaz. He silently watched as Riyaaz shot his wife before his eyes. Later he buried her somewhere.

Sooryavanshi asked inspector Sangram Bhalerao a.k.a Simmba (Ranveer Singh), who was the station-in-charge at Shivgarh, to catch Ansari. Simmba found out that the terrorists had planted bombs across seven locations in Mumbai. It is revealed that the Anti-Terrorism Squad’s headquarters is one of those seven locations!

The bombs were planted in vehicles that were parked at those locations. Sooryavanshi and his team took the help of the National Security Guard to safely extradite the planted bombs via helicopters. The helicopters carried the vehicles and disposed of them into the sea. The bombings failed.

But the terrorists were not ready to give up so easily! Riyaaz and his group used Ria as a suicide bomber to attack the ATS headquarters keeping Sooryavanshi, Simmba, and other cops as hostages.

The scene showed all the cops sitting on their knees in a queue and Riyaaz holding a sharp knife to Sooryavanshi’s throat. His wife Ria strapped in the bomb was standing helplessly nearby. Suddenly inspector Simmba rose and told Riyaaz that “terrorism will have its end” as “he” is coming. Riyaaz didn’t understand who this “he” was.