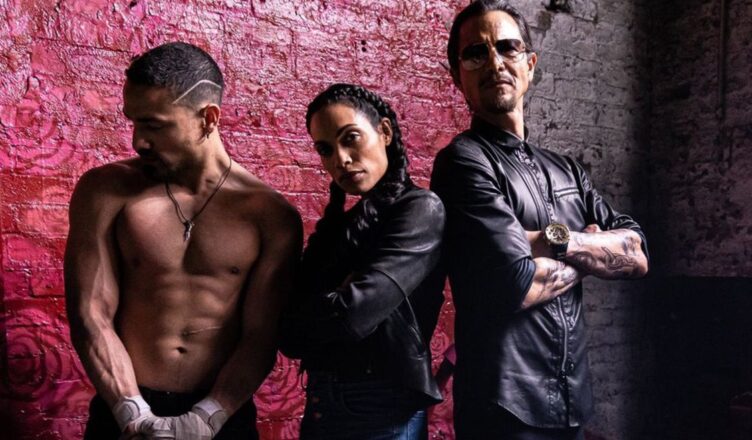 The riveting drama “DMZ” premiered at SXSW 2022 on Sunday, March 13th, 2022, at the Paramount Theater in downtown Austin. Prior to the showing of this first of four episodes of the limited series that will air on HBO Max beginning on March 17th, Dawson and Bratt and the others present met with press on the rooftop of the Riley Building to answer questions and continued with those answers at a Q&A following the screening of the first of the four episode series.

Producer/Writer Roberto Patino (“Westworld”), taking the stage with the cast in Austin, described how he had taken the Vertigo graphic novel (comic), which ran from 2005 to 2021, and selected Rosario Dawson’s character of Alma Ortega to develop more fully. Because of the pandemic, the series was pared down to only 4 episodes

A Civil War has decimated the United States. This theme is particularly relevant at a time when we are closer to Civil War than at any time since the 1861-1865 conflagration. The story focuses on the DMZ (Demilitarized Zone), a ravaged Manhattan Island with 300,000 souls trapped inside.The various parts of Manhattan have been taken over by various gangs. We see the Village, the Upper East Side, Midtown, Central Park, Chinatown and  other parts of the city.

One power-broker leader within the warring factions, Parco Delgado, is portrayed beautifully by Benjamin Bratt, as a whip-thin political entity radiating ruthless charisma. Onscreen, he explains, “People don’t want leaders. They want spectacle.” Imagine a good-looking, taller, younger uber- articulate Hispanic Putin. Parco Delgado is  a power-hungry leader who will stop at nothing to consolidate his reach and is running for Governor of the DMZ, telling the enthusiastic crowd that the DMZ will become its own state. Bratt is outstanding in the role, menacing and believable.

Alma (Rosario Dawson) portrays a medic, a single mother desperate to find her missing son, Christian They were separated while fleeing the city six years prior, in a scene straight out of the train stations in Ukraine. In Episode #1, Rosario interacts with another medic, portrayed by Mamie Gummer, daughter of Meryl Streep and a look-alike for her talented mother. It’s an intense exchange as the medic trapped within the DMZ (Gummer) takes Dawson’s Alma under her wing in helping her search for her missing son.

Another outstanding performance is turned in by Jordan Preston Carter, who portrays the young Odi Peerlis. The young actor has eleven credits since 2016. He is a natural. He conveys the trauma and pathos of the young caught in the midst of war.

One line from the film puts the film’s themes this way: “Even when we’re here, surrounded by two armies with guns firing on one another, people can’t see past killing each other to better themselves.” Later, the line is: “People won’t hesitate to kill you for whatever you’ve got.”

Dawson’s character represents hope and a better way of dealing with life than through never-ending violence. In her remarks to the audience, she mentioned her own hard-scrabble upbringing on New York’s lower East side and described the entire four-episode series as “real” and “poignant.” Dawson decried “patriarchal toxic masculinity” that she hopes her character is a catalyst to eliminate.

Bratt, too, described a change of heart in portraying his character as he began work on the series based on a comic book. He said that, at first, he thought it would be fun to portray a kick-ass comic book character, but, as the series went on, he began to see Parco Delgado (his character) as “a real person suffering from habituation learned as a young man; might makes right. Clearly he is someone who recognized the opportunity to seize power.”

The Ava Duvernay directed series, judging from the showing today, is dynamite. Don’t miss it on Thursday, May 17th, when it premieres on HBO Max.