Did you know that Seth Rogen is developing a Teenage Mutant Ninja Turtles project? It’s true, back in June of 2021 Seth Rogan shared a weird announcement of his involvement in the project on twitter. The announcement is weird in that it is just an image of some notes on loose-leaf paper.

The piece of paper included things like the date August 11th, 2023 as well as some words like “Discipline, Honor, and Loyalty”. There’s also an asterisk to apologize to april and some brief notes on mutation. The notes on mutation are interesting as they include a drawing of a canister of the ooze originally mutated the turtles.

The type of Mutation Rogen notes are: 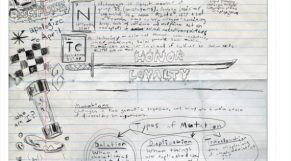 Now these mutations are eye catching because they don’t really sound like mutations we’ve historically seen in the franchise. Most mutations in this franchise animals mutating into humanoids but what Rogen wrote down sounds more grotesque and abstract.

Rogen’s Ninja Turtles movie will release on August 4, 2023. We don’t know anything about the story yet but we do know a date.

What do you guys think of Seth Rogen developing a Ninja Turtles movie? Are you excited for his involvement?