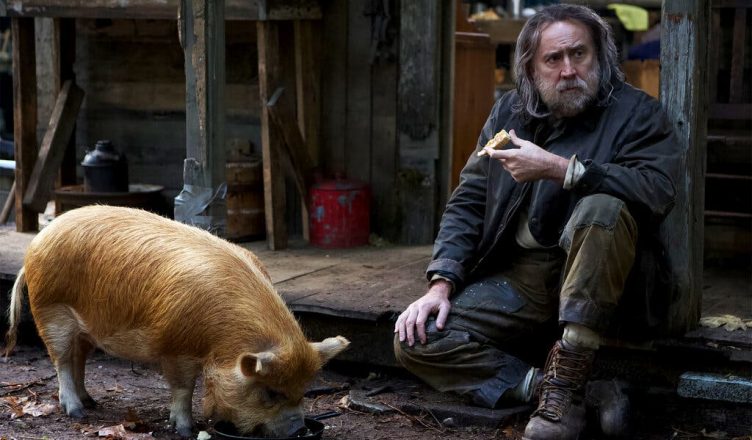 The next time you have some ham for breakfast, remember the “Pig”. Written and directed by Michael Sarnoski, “Pig” was released on July 16, 2021 on the big screens. “Pig” follows the tale of a reclusive truffle hunter and his love for his prized foraging pig. This is a heart touching story of human-animal companionship, dejection and acceptance that is sure to leave you staggered. The film features Academy award-winning actor Nicholas Cage in the lead role. Supporting cast includes Alex Wolff, Adam Arkin and not to forget, the foraging female pig who in real life was named Brandy! Sadly, Brandy passed away due to a jaw infection after the film was released, according to Sarnoski in an interview.

The plot revolves around a chef turned solitary truffle hunter named Robin Feld (Nicholas Cage) who was also know as Rob. Rob used to hunt for truffles deep in the forests of Oregon with the help of his prized foraging female pig. He used to sell the truffles he collected to a young man named Amir (Alex Wolff) who used to supply luxury ingredients to restaurants.

One night, some unknown assailants attacked Rob and stole his pig. The film follows the endeavors of Rob who partnered with Amir to find his beloved pig. In the search for his pig, Rob had to come face-to-face with his past in the city of Portland. He even visited the house where he used to live with his late wife Lori (Cassandra Violet). Her death had compelled him to seclude himself from the society.

After several misadventures later, he became familiar with the bitter truth. It was in fact Amir’s father Darius (Adam Arkin) who was involved in the stealing of the pig. Darius even offered Rob a sum of $25,000 for the pig and also threatened to kill her if he didn’t end his pursuit.

In the past, Darius and his wife used to visit Rob’s restaurant and his wife used to enjoy the food made by Rob. Now Darius’ wife was in coma and Rob and Amir emotionally took over him by cooking the same dish for him that Rob used to make years ago for him and his wife when they visited his restaurant. At this, Darius became utterly emotional remembering the past and revealed the bitter truth to Rob. The kidnappers that he had hired to kidnap the pig had manhandled her which had resulted in her death!

With this, a remorseful Amir drives Rob back to a diner near his forest home. Rob forgave Amir despite his carelessness and continued his truffle selling partnership with him. He finally returned to his forest home and played the tape which Lori had recorded herself singing for him on his birthday.

Honestly, I was moved to see the bond between a human and an animal here. Pigs are generally raised for meat. However, “Pig” does remind us that not all humans view animals as food. The pig in the movie was Rob’s companion and her loss was as griefful for him as losing a close friend or a family member.

As the plot proceeds, we get to dig deeper into Rob’s past. Rob loved his late wife very much and her death was the reason he turned into a reclusive truffle hunter from a renowned Portland-based chef. I believe, this does signify how uneventful circumstances can impact one’s life as well as well-being. After the death of his wife, Rob had found solace and companionship in his prized truffle hunting pig. 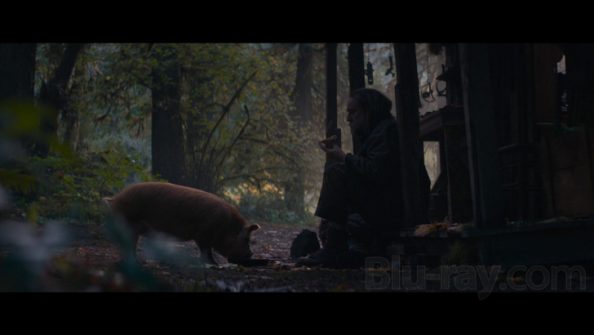 Though “Pig” is not much of a story but still I feel it can impact the minds of the audience. The plot reveals Rob’s acceptance of the reality. He came to know that his beloved pig had died due to her being manhandled by the kidnappers. Still, he chose to forgive Darius for his misdeeds and Amir for his carelessness. I think this plot does signify the notion, “To forgive is divine!”

The ending scene shows Rob washing his bloody face which he got from his endeavors to find his pig. He came out clean as a new man and started listening to the song “I’m on Fire” of Bruce Springsteen which his late wife had recorded herself singing on the occasion of his birthday. Does this signify that Rob is willing to leave behind his past sorrows and move on in life as a new man with a new beginning? I think; this truly does!

The Complexity Involved In Wolff’s Amir Character Amazes Me!

I believe Amir was not as innocent as he seemed throughout the movie. Firstly, he lied to Rob that his mother had committed suicide when actually she was in a coma. Secondly, it was from Amir that Darius came to know about Rob’s prized truffle hunting pig. So here deep in my mind, I suspect if Amir had some role in the pig’s kidnapping? May be or may be not! Whatever the case may be, Amir did prove to be a good companion to Rob in the quest for his pig.

A versatile actor like Nicholas Cage needs no introduction. “Pig” is filled with thrills and impactful drama from the start till the end. Here Cage does prove that he can carry out character roles pretty well in dramatic outings.

The Plot May Be Impactful But Is Illogical

I didn’t understand what made Darius so obsessed with Rob’s truffle hunting pig that he hired kidnappers to get her and offer Rob an astounding $25,000 to end his search for her. Aren’t there many truffle hunting hogs out there? Darius could have easily gone for a trained one in the hog market. Even he had no enmity or competition with Rob for which he would enjoy seeing him suffer.

Honestly, Sarnoski’s story did keep me engrossed but if I had started thinking logically, then I would have found the entire thing to be mindless. 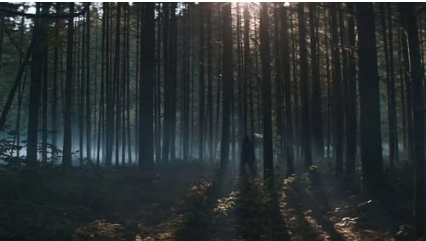 In most movies that I have reviewed so far, you may find me praising their cinematography. But sadly, “Pig” doesn’t give me an opportunity to compliment. I find the cinematography in Pig to be dark, dull and gloomy. May be cinematographer Patrick Scola wanted to create an essence of distress through his camerawork. However, in spite of the dull cinematographic experience that I had from watching “Pig”, I find its editing done by Brett Bachman to be quite precise and immaculate.

Last But Not The Least, This Movie Is Rated R!

Rated R! If this sounds unbelievable, let me tell you that “Pig” does have offensive language, sex-related dialogues and violence in it which are not suitable for certain audiences, especially children.

Rob on his adventurous search for his Pig, gets beaten up badly on several occasions and his face gets swollen and bloody throughout.  Alcoholism and smoking are shown and death and suicide are discussed at certain points. Besides, even if not shown, “Pig” is a story of animal abuse and killing. I think, all these really make “Pig” a Rated R package!

I believe, Nicholas Cage’s distressed shaggy old man look in Pig beefed up his performance. I have to give some credits to Adam Arkin as well for carrying out his antagonist role pretty well. Pig’s story was written by Sarnoski himself who said in an interview that the plot was inspired from the stories that he had heard from truffle hunters. So, here I feel that the story of “Pig” might have some reality associated with it. Who knows, there might have been a truffle hunter in real life like Rob whose pig was stolen! Apart from all this, I must say that the pig was trained really well to perform in the movie. I have seen dogs, cats, dolphins and many other animals being trained for movie roles but for the first time I have come across such a well-trained pig.

But why only Rob’s pig? I wonder, how much was that truffle foraging hog worth anyway that Darius offered Rob a hefty amount of $25,000 just to keep his mouth shut and stop his search? I agree that Rob’s bond with his pig was priceless but was the pig really worth that amount? To know this, let’s dive into the high-stakes world of the truffle hunting industry which is flooded with rivalry and sabotage. I must tell you that truffles are expensive and a pound of truffle can be worth as much as $10,000! Thus, the animals like dogs and pigs which are trained for truffle hunting are surely worth their price. Also, there happens to be a lot of unhealthy competition in the truffle industry and competitors are always out there to ruin each other’s businesses. This is very much eminent from the movie.

Overall, I would say that “Pig” has all the materials to give the audience a thrill. If you crave for some action, you will get it too as you will see Rob getting beaten up black and blue throughout the movie in the quest for his pig. The movie does get slow at some places with emotions related to Rob’s past bundling up but I believe you will enjoy watching his adventurous journey towards the realization and acceptance of his fate.