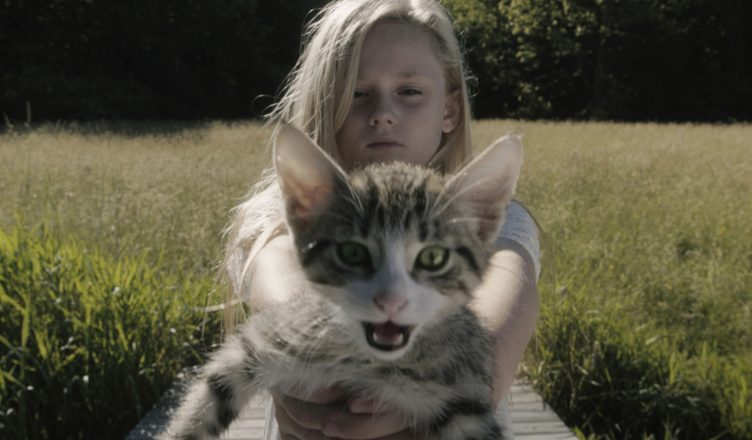 The film is worth seeing for the performance of young Audrey Grace Marshall, (“The Flight Attendant”) who was 7 when filming began. Over the 3 years the film took to make, Audrey grows into a beautiful 10-year-old. She is the second child actor whose debut performance I recently saw that gave the audience a polished-but-natural performance. (The first was the 9-year-old star of “Belfast,” Jude Hill.)

The plot follows Emma (Audrey Grace Marshall) as she is more-or-less left to raise herself in rural Pennsylvania. Her mother, Jessie, (Jessie-Dominique Johnson), is a drug addict. Jessie overdoses and ends up comatose in the local hospital. There is a period of plot time when  the audience is left wondering, “What has happened to the child’s mother?”

It’s not quite clear, at first, either, who her biological father is. In time, we find out that it is Lonnie (Kevin Loreque) a veteran with severe PTSD.

Lonnie also has a Jesus-freak mother, Emma’s grandmother, Sadie, well-played by Maria Hasen in what appears to be her first role.

The film almost becomes a “What Not To Do In Raising A Child” manual:

It was at that last point that I said, “Watch. I’ll bet she isn’t wearing a helmet.”

Wonder of wonders! Emma WAS wearing a helmet! Hip hip hooray! She still doesn’t have a stable guardian situation, since the film opens with her Grandfather’s death. Apparently Gramps had inherited the task of being the responsible adult in her life.

After the funeral of her grandfather, Emma sits down next to a woman we don’t know and says, “Why are you here?”

The stranger says, “Well, he was my father.”

Now we are puzzled about what the relationship is between the strange woman at the funeral and Emma. Is this Emma’s biological mother? Did Grandpa have an older child and then father this much younger child? These are plot mysteries that we ultimately do figure out, but there had to be a better way to clue the audience in on plot points like, “Who is this woman at the funeral?” “What has happened to Jessie in the hospital? She is gone a long time from the plot and nobody seems to know or care.” “Why is there no agency responsible for checking in on poor Emma?”

The film makes good use of Camp Ballibay in Pennsylvania, producer John Jannone’s childhood home. Jannone is also given a credit for the music; he even made it onto the list of caterers. The entire project reminded me a bit of “Shooting Heroin,” also filmed in Pennsylvania, with all of the director’s family hostessing the cast. That was also a film about the opioid epidemic.

This film is much more about a little girl named Emma who still loves life and the Tooth Fairy, despite a series of extremely negative early childhood challenges to normal development. And she is a young actress that we may well see a lot of in the future.

It’s a noble effort and the performances are better than fine. My complaints are: (a) it’s too long at 1 hour and 44 minutes and (b) some of the plot points are difficult to figure out for extended periods of the plot.