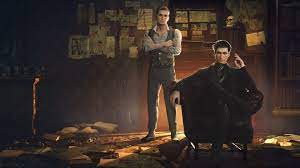 When the weather turns and long summer days turn into cold autumn nights, you’re going to want something to keep your mind sharp and blood warm. These action-adventure video game picks are certain to do both and are likely to keep you playing long after the midnight hour has struck. All the below games are playable on Microsoft PCs, as well as the Xbox One.

The world’s most beloved detective has come packaged in an action-adventure mystery game which is set to enchant players around the world age 13+. Created and self-published by the developer Frogwares, Sherlock Holmes Chapter One delves into the troubled youth of Sherlock Holmes when he went through a rebellious phase and visited an island paradise in the Mediterranean. Which just happens to have been where his mother died.

While the vibrant beauty of the island is attractive and urban in all the right ways, below the surface lie hidden strings being pulled by criminal elements – and it’s up to you as Sherlock to untangle these as you search for justice, truth, and find your own moral compass. The islanders, though friendly, aren’t keen to open up to outsiders, and you’ll need all your wits about you in order to make a mark.

The gameplay is based on a choose-your-own-adventure style, with the world being opened only through the various choices that are made. Deduction is your most well-known skill but deception – and even violence at times – remain options in your toolkit. The many subtle ways that can be employed are a huge game draw and the ability to pin and return to evidence in Sherlocks mind palace is artfully done.

The rather enigmatic companion to Sherlock in this game is Jon (who is fleshed out to be a best friend to Sherlock long before Holmes ever meets his future friend John Watson), is a good sounding board for decisions. And with every decision that is made, you’ll uncover more about the past that some are desperately trying to keep hidden, as well as mould the current green, young Sherlock into what could be a thoughtful man … or a dangerous detective.

If you’re a fan of Lego World, or even Star Wars in any form, then this action-packed, humorous, and thoroughly exciting iteration of The Skywalker Saga is going to be a go-to option for many, many nights – and best of all, it’s suitable for all ages to play. The universe that’s been built explores everything known and experienced in the nine Skywalker films, and you can pick any of the film locations shown to start exploring – with hundreds of ships, characters, and vehicles at your disposal.

Choose if you want to be a hero or a villain – or take turns alternating between the two sides of the force, as you experience the saga with brand new Lego humour. Rey, Finn, Luke, Leia, Darth Vader, Anakin, and other great memorable characters are available and there’s tons of side quests to embark on as you adventure throughout the galaxy.

Biomutant blends fantasy, a unique combat system, and a colourful world with a post-apocalyptic storyline that’s sure to hook many. Marketed for ages 12+ the slick, action-packed scenes and beautiful, unfolding world are certain to grab your interest as you traverse through a variety of situations and craft weapons to ensure you have the perfect combat tool available. The main storyline focuses on how the End is coming to the world, in the form of a plague sweeping the land – as the Tree Of Life slowly fades. Someone needs to help unite the divided tribes within the world for what is to come … and that someone, is you.

The melee, shooting and martial-arts combat (called Wung-Fu) are only one large draw, another is how along the way you’ll also be able to pick up various new abilities and skills. Being able to change how you look will also affect your overall skills, and as mutations occur, the chance to unlock psi-abilities, telekinetic powers and other forms like Turtleform ensure the gameplay doesn’t get old. Each action you take on the online gaming platform will impact the overall story arc, which ensures multiple scenarios for how it is that the story will finally end.