Netflix brings us a story where a Super-Man wrestles with his ideals and the world he lives in. He’s an older hero who’s often concerns himself with legacy and his influence on the world. His son Brandon tries his best to prepare himself to take on the assumed responsibilities of The Utopian whenever his father gives up the role/title. There’s a Super-mom and a Super-sister and a whole bunch of other super’s that makeup the makeup of Jupiter’s Legacy. 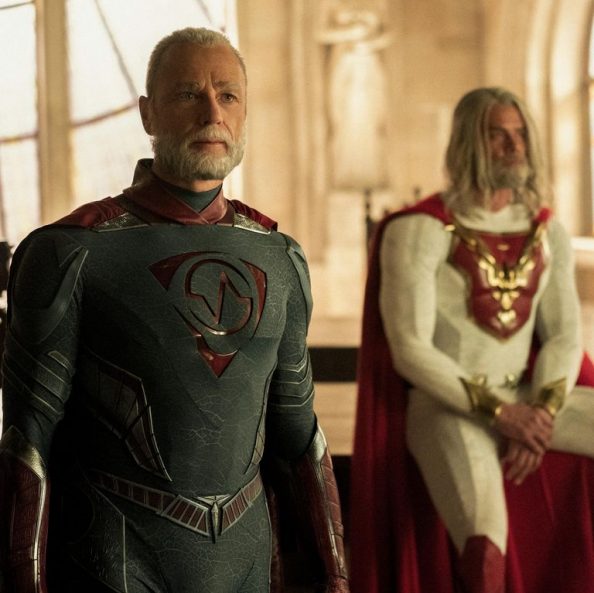 The family drama in Jupiter’s Legacy is actually really good. It may seem a tad too familiar if you’re a fan of these kind of shows but it is different and a bit refreshing to see it wrapped in the world of a Superhero show. And the acting is actually really good. Josh Duhamel delivers a really good performance as Sheldon/The Utopian. He’s like an older Superman who is a little battle weary but sticks to his ideals and his code with unwavering faith. A lot of the other characters deliver some really good performances as well including Leslie Bibb as Sheldon’s wife Grace and Ben Daniels as his brother Walter. Heck, Ben Daniel’s performance may be my favorite one in the whole show in hindsight… but only in hindsight.

The dialogue is written actually also really good. We don’t get stilted dialogue or scenes of conversations that go nowhere. O bring this up because this is a legit issue in superhero movies and shows. Sometimes we get scenes for no reason and it ends up being distracting. Jupiter’s Legacy is actually pretty lean in that regard with very little fat to trim. And we have true character development and full on exploration of interpersonal relationships between a superhero family and the people around them. It’s actually really fleshed out and I appreciate that.

Jupiter’s Legacy surprisingly deals with a lot of death. Jupiter’s Legacy doesn’t revel in the gore and violence like Amazon’s shows. Instead Jupiter’s Legacy has displays actual consequence to our heroes’ choices as superheroes and then it does a hard examination on the effect that death has on everyone.  it does I like how heroes die but I don’t know if I care to watch how the trauma of death affects super heroes. I go to superheroes to escape relatable things now humanize these beings. 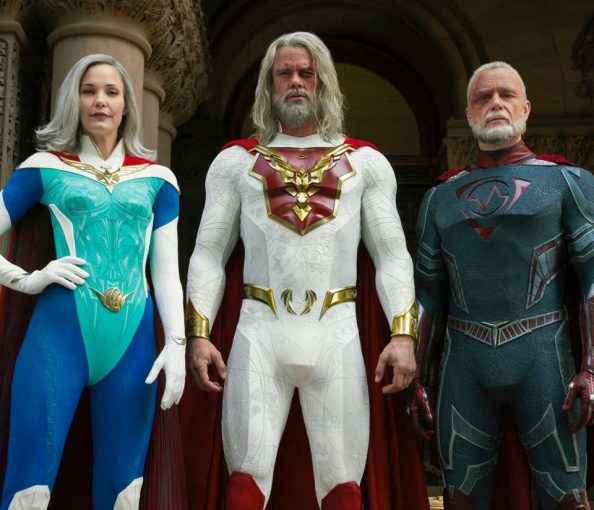 We finally learn how the code came about for the Utopian and why. It’s a check and balances system to stop either of them from attempting to govern or rule. Sheldon saw the inherent dangers of their powers from the beginning and chose to impose the rules on the 6 heroes early. It’s incredible that he had the foresight to see that they could develop God complexes and made a genuine effort to get in front of that.

Costumes look like something out of the Flash or any other CW show.

Jupiter’s Legacy is a tv show with a movie budget but still has tv quality writing and cheesiness. Its like Superman and Lois but different. The big thing is the inter-family drama and it unfolds in surprisingly CW fashion at… drum roll please… AT THE DINNER TABLE! Yes, superheroes get together for Sunday dinner just like regular folks even though they’re not at all regular. Oh, and one of them even gets drunk and causes a scene!

The pacing is slow. A lot of shows depend on the audience to finish watching the first episode before they reveal the hook of the show which is a gamble. Jupiter’s Legacy waits until the 2nd and 3rd episodes and even then it only revs up from snail speed to tortoise.

The action is WACK. I genuinely felt I was watching something choreographed by the people who make the superhero shows on the CW. I hoped we would get some good stylized choreographed fighting and was left disappointed. It’s tough to forgive. Some would say that the action in the Boys is just as campy, which is true, but the boys at least has the satirical humor behind a lot of their action scenes and fights. Pairing this kind of fighting with a drama that wants you to take so much so seriously is seriously difficult. Its… odd. It’s not to say that Jupiter’s legacy doesn’t have its humor because it does its just… not enough to excuse this scene.

That final episode changed my opinion of the whole show. When I learned of the nuance of the writing that’s been in my face this whole show and how it forces me to confront these facts… whew. That’s the Mark Millar I know and love. For a while I was seriously wondering if this was the same guy that came up with Superman Red Son and Old man Logan.

We learn that the Union and their code has been fractured from the start. Everything has been a farce in light of the Utopian

The problem is that Jupiter’s Legacy doesn’t do enough to make you interested in investing in the characters. To this day I still have to google the name of… The Utopian. I know him as Sheldon and his son as Brandon but my lack of investment in their super heroics actually makes me uninterested in the side super characters too.

Brandon cant measure up to his dad yet. For those of us who watched invincible this is kind of familiar in which Brandon is the more inexperienced hero who kind of gets his ass kicked a lot. The villains like to talk smack about it to him too with Paragon, the opening bank robber, going in on the jokes and immediately proceeds to whoop his ass ‘vincible style.

Who is this show for?