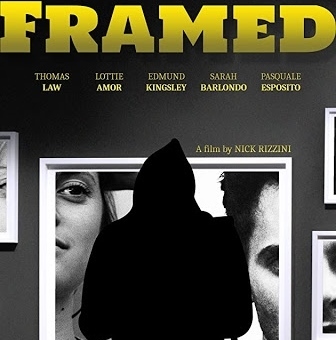 The new British thriller “Framed” (available now on amazon Prime Video) covers a lot of ground.   Privacy issues, single female self-sufficiency/independence (as ardently advocated by a fetching Lottie Amor, who needs to be in more movies), frank confirmation that men really do want what woman say men really want aaaand a political scandal tossed in for good measure is a shitload to process.

The good news is that, all in all, this portrait of a guy (Thomas Law of BBC-TV’s “EastEnders”) going gaga over a gorgeous neighbor gal through his camera lenses does a summarily snappy job of focusing in on each of these developing plot lines.

Not a lot to bitch about here.  Perhaps more exploration into the political scandal would have infused more intrigue.  Still, I appreciated this story element’s expository scene for it’s candor and contriteness.

Labeled a thriller, “Framed” is not so much that as it is an intelligent investigation of the legal and moral boundaries of personal privacy as this guy snaps away at an unsuspecting subject……or so it seems.

How refreshing it is to witness one’s accepting of accountability for willful actions, regardless of political standing or status in the social strata.

In the end, what we really have here is a good old-fashioned love story, featuring a fabulously photogenic young couple.

No matter how they’re framed.

I had the occasion to talk with “Framed” first-time Director Nick Rizzini. Here’s our interview:

“Framed” is your first feature film running the whole show as both Writer and Director.  What perhaps came as a surprise to you about this new adventure?

There is one thing above all that got me by surprise, but I might be the naive one here. I’ve always had this romantic idea of a film industry where one rarely finds people without passion and motivation for the job. I couldn’t be more wrong. And now I understand the value of finding a team of people that have the same approach to the experience. Being an independent filmmaker comes with a quite limited margin for error. Anything that goes wrong can have a huge impact on the movie. In an environment like this you want a team of people that are willing to go the extra mile for the sake of the project. Luckily I had many people in my team with this mentality.

Among many themes running through “Framed”, the question of ostensibly where one’s privacy ends and another’s begins is front and center among them.  Where do you personally fall in this controversial and inflammatory debate?

Personally, I believe balance to be key. Privacy is a huge topic that we need to address in the most careful ways. Framed revolves around a type of privacy that is not anymore at the center of the conversation. Today we are talking more and more about data privacy. I believe in both cases it is important to have an understanding of how our data/image is being used and how important it is to protect it. But we need an understanding of human behaviors too, acknowledging that what we don’t protect could potentially be exploited.

Female autonomy is another area delved into here, particularly as regards the single character of Virginia, spiritedly brought to life by a vivacious Lottie Amor.  Each one of us are independent souls.  However, do you believe that staunch, even, at times, militant, feminism runs the risk of deteriorating the special inherent wonder and grace of the female sensibility?

In certain cases, I do. And I’m not saying that it’s necessarily bad, I’m just saying that one attribute doesn’t have to exclude the other. Being completely in love with, as you beautifully put it, “that special inherent wonder and grace of the female sensitivity” I find it sad when it’s subdued due to a fear of being a weakness. I actually believe it could be one of the most empowering qualities a woman could have. At least, it has a lot of power over me and I’m sure I’m not the only one.

What other aspects of the human condition do you long to bring to the screen as expressions of your vision, Nick?

There is not one condition in particular that I’m drawn to, but the way I write it’s quite introspective. My approach is highly influenced by my acting background and I feel it will keep on showing up in my scripts. At the moment I’m writing a spy movie set in a cyber warfare scenario. Reading it this way, it sounds like an action movie, but knowing myself I’m sure the humanity behind the structure will take the lead.

In the end, what we really have here is a good old-fashioned love story, featuring a fabulously photogenic young couple.