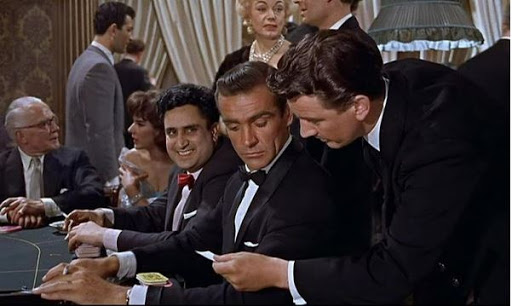 James Bond has become a cultural touchstone. Now, almost 60 years since he burst once screens in 1962, he doesn’t just represent the world’s luckiest secret agent but embodies suaveness and sophistication. British people around the world are proud of the cultural cache that comes with the James Bond franchise. From his tux to his one-liners, there are some aspects of Bond that are sewn into the fabric of the character and the institution it represents. None of these are more important than the casino. But why is the casino so important to the concept of James Bond?

Our first introduction to James Bond in Dr No (1962) sees him, played by Sir Sean Connery, utter the illustrious line ‘My name is Bond…James, Bond’ while playing Baccarat Chemin de Fer at the Les Ambassadeurs Club. The cool factor encapsulated in this line’s delivery cemented the character as a household name. The casino setting is just as important for the set up of Bond as a character as the suit he wears and the beautiful woman sitting across from him.

The casino plays another role in the Bond films – it allows Bond to size up his opponent. From playing baccarat against eye-patched Emilio Largo in Thunderball (1965) and Xenia Onatopp in GoldenEye (1995) to backgammon against Kamal Khan in Octopussy (1983), casino games provide a way for Bond to meet and antagonise the villain.

Casino games are a good way for Bond to showcase his daring and heroic attributes. He doesn’t back down, he plays it cool, and he remains in control when the odds are against him. Rattling the villain by besting them also means that Bond can irritate them, so they make a slip up during his investigation. Of course, the most striking occasion of Bond and a villain fighting it out on the card table is in Casino Royale (2006) where the plot is tied to a high-stakes poker game.

In 1969’s departure from the norm, On Her Majesty’s Secret Service, Bond (played by George Lazenby) meets Teresa di Vicenzo, the soon-to-be Mrs Bond, played by Dame Diana Rigg. After rescuing her on a beach, he rescues her again when she loses and can’t afford to pay the bill in the casino. Formally meeting in the casino helps set their relationship up.

They are equals and sparring partners, which reflects the levelling factor of many casino games. The odds for games such as roulette mean that experienced players and amateurs have the same experience. Their relationship is built around holding cards close and then revealing their intentions and throughout the film, they perform something of a poker game with one another. James Bond’s character is tough and steely, wearing the ultimate poker face, which Tracy manages to crack, while she is cool and aloof and he helps her show emotion.

Evolution Through the Eras

Ultimately, the casino represents an outward suaveness that James Bond’s character also exudes. The casino is the location equivalent of the character. But as Bond has evolved through the ages, so too has the casino experience. The suaveness and sophistication of the casino experience has also been translated to the digital methods people are choosing to use to engage with casinos. People enjoy digital entertainment and being able to access games on their mobiles and laptops. So, it makes sense that the product offering would be adapted to allow this.

As the casino table games at Royal Panda show, many of the most popular casino games such as roulette, blackjack, and poker, have been transformed into live variants. These games harness the benefits of seeing a dealer to ramp up the tension. Players are able to witness a dealer, dressed as they would in a casino setting, select cards and spin the roulette wheel. In such a tense game, this immersive element helps both show the benefits of digital technology and retain the class that these tables games exude.

The casino is as integral to a Bond film as a jet-setting location and a car chase. It is the vodka martini, shaken not stirred, of locations and helps showcase the elements of Bond’s character that were conceived in the original Ian Fleming books.