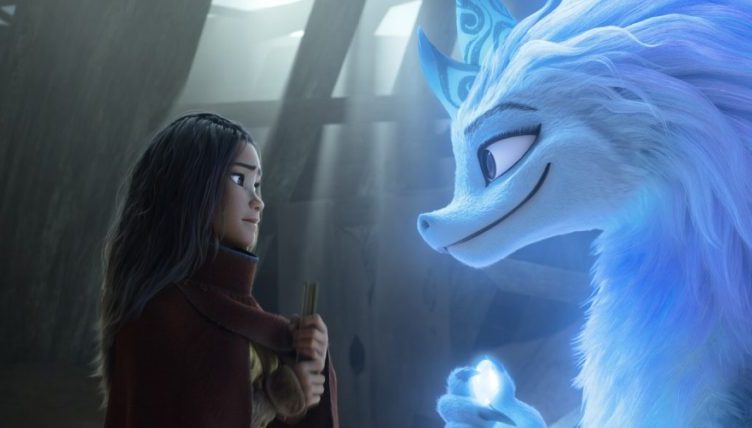 In 2021, when the world which is affected by the coronavirus disease has become a depressing place to reside, Disney brings you an action-packed animated fantasy film which is entertaining enough to make your gloomy day joyful, cheerful and colorful once again! Written by Qui Nguyen and Adele Lim and directed by Don Hall and Carlos López Estrada, “Raya and the Last Dragon” packs together an awesome storyline with some amazing action and adventure in the beautiful fantasy world of Kumandra.

The story goes back 500 years into the past. Kumandra is a magical fairytale world set in the Southeast Asian landscape where humans and dragons lived together in harmony. Suddenly this peaceful world is attacked by some formless evil force named the Druun, which are in fact part virus and part monster. The dreadful part is that they have the ability to turn anyone who comes in contact with them into stone! All the dragons fought these monsters and sacrificed themselves for the sake of their dear land and human friends.

Now 500 years later, the same Druun monsters have come back and the fate of humanity and the land of Kumandra is in the hands of a lone warrior princess named Raya (voiced by: Kelly Marie Tran) who teams up with the last left dragon Sisu (voiced by: Awkwafina) in order to stop the Druun.

I find Disney’s new warrior princess Raya to be exceptionally different from the earlier Disney princesses we are familiar with. She has an unromantic, bold and adventurous personality and likes getting indulged in some hardcore action. Her intense sword and fist fights are enough to give children a more “grown-up” feeling after watching this movie. Apart from the action, it’s even funnier to watch Raya riding into battle on an armadillo-bug called Tuk Tuk (voiced by: Alan Tudyk).

Raya and the Last Dragon Trailer: 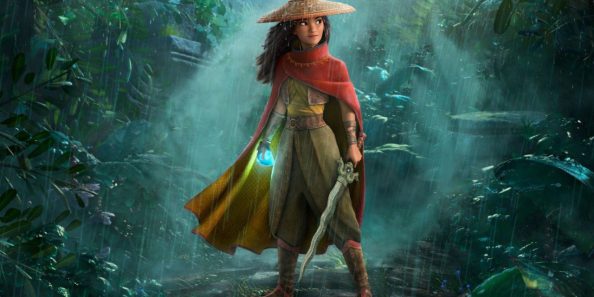 I really loved the cinematographic beauty of the fairytale land of Kumandra in Raya and the Last Dragon. Estrada has done some amazing animation to bring this magical world alive in vibrant beauty and colors. I find the lighting, landscapes to be extremely gorgeous. To add to this beauty, Disney ought to be given some credits too for adding minute detail in each and every shot with its amazing CGI. After watching the movie I do get the essence of Disney’s “Frozen” and “Moana” in it. This might be because Disney has developed the characters in a manner to look similar to those in “Frozen” and “Moana”. However, there lies a Southeast Asian touch in the characters’ appearances. I feel the characters and landscapes shown in Raya and the Last Dragon will surely give you an essence of the traditional Southeast Asian culture. This movie draws inspiration from various Southeast Asian countries like Thailand, Cambodia, Vietnam, Malaysia and Indonesia. It maybe because of this reason I felt the water dragon Sisu looked more like a harmless unicorn rather than a fire-breathing dangerous scaly creature we are accustomed to see in most dragon movies.

I believe Disney’s new princess Raya warns us against isolationism, which has started to spread its wings and plague the world. You will come across the scene where Sisu the dragon states that the Druun are nothing but a plague born out of human discord. In the modern world where isolationism has become the new normal and where unity and coordination among fellow human beings are absent and people make little efforts to understand each other, this movie indeed brings out the essence of unity and friendship. Even from the movie we can see how Raya’s father Chief Benja (voiced by: Daniel Dae Kim) preaches the importance of unity. I believe this movie clearly communicates to the “next generation” to fix this issue of isolationism.

I feel that Raya and the Last Dragon also portrays trust issues to some extent. You will come across the ending scene where Raya learns to let go of her anger even after getting betrayed. She decides to forgive and understand her enemy Namaari (voiced by: Gemma Chan). I believe this movie does signify trust to be an act of grace, which must be present between two individuals in order to sustain a healthy relationship.

There’s nothing negative about Raya and the Last Dragon. The only thing I felt was that the movie might have gone a bit too dense with its theme. If you happen to watch the last half-hour of the film, you will agree to my view that in this duration the film has spelled out its ideas more through dialogues. I think this was a bit overdone and the filmmakers should have let the imagery and narrative do the job. The theme could have been more perfect if such overexplaination through dialogues was taken care of.

I personally find Awkwafina’s voice performance as Sisu the dragon to be terrific. Thanks to her goofy dialogues, Sisu has become my favorite Disney comedian now! Besides, Sisu’s shape-shifting powers are adorable too! The entire film is skillfully voiced and all the voice actors including Gemma Chan and Sandra Oh have tremendous synchronization with the voices of their respective characters.

As I watched Raya and the Last Dragon, water seems to me to be the defining motif of this movie. Water empowers princess Raya. It is water which empowers Sisu the dragon and the amazing part is that this dragon breathes out vapor mists and loves swimming! It’s also water which connects the five lands of Kumandra. This lovely animated watery world is accompanied by some amazing music scores composed by James Newton Howard. If you happen to listen to them, you will surely find yourself getting carried away into the enchanting world of Kumandra.