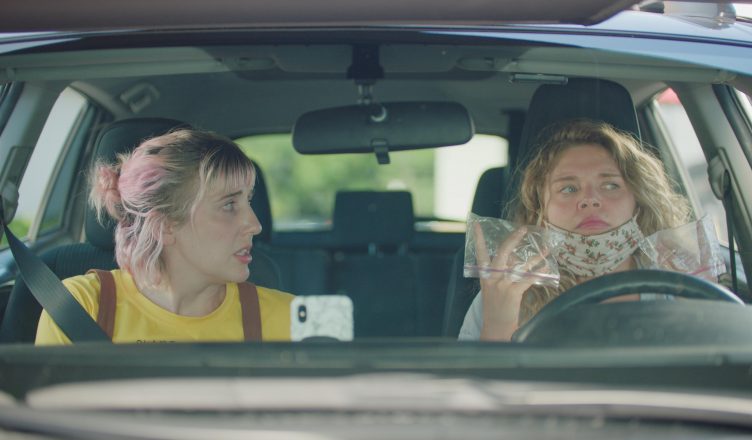 Blake (Mallory Everton) steels herself to exit the car during a pandemic and handle a sticky gas pump, armed with nothing but sandwich bags for gloves—and they’re snack-size. | Credit: Brenna Empey

“Recovery,” a film written by Whitney Everton and Stephen Meek was my first film of Day #2 of SXSW Online Film Festival. Two sisters, Jamie (Whitney Call) and Blake (Mallory Everton) Jerikovic stage an across-the-country trip to rescue their Nanna from an old folks’ home during the pandemic. 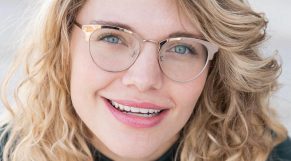 It is one of the few—-perhaps only—films I’ve seen that completely embraces Covid-19 in its storyline. The traveling sisters (Whitney and Mallory) have actually been best friends since the age of nine. The home-made video at the end confirms their easy familiarity. They are also sketch comedy veterans of “Comedy C” and do a wonderful job of embodying their characters and (for Mallory)  writing the screenplay in a writing partnership with her husband Stephen Meek.  Comedy is not easy to skillfully create. It needs to be as light and fluffy as a souffle. These two seem like the heirs apparent to Tina Fey and Amy Poehler.

When the film opens, Jamie (Whitney Call) is celebrating her 30th birthday. The coronavirus is not yet a thing. Jamie is a teacher of 4th graders. She is thinking about buying airline or hotel stock and investing in a pricey gym membership. Sister Blake (Mallory Everton) has just had a one-night stand with a cute guy named Scott; that is another topic of conversation. They are unaware that they are about to be frozen in time by the pandemic. In the background of the next few scenes we hear the disheartening news of 51,000 deaths on March 30 of 2020. (If nothing else, this film will be a great time capsule that isn’t all grim statistics.)

Upon learning of the ravages of coronavirus on  Nana’s nursing home, the pair, headquartered in New Mexico, at first are counting on their older married sister, Erin (Julia Jolley), who lives in Washington closer to Nanna, to ride to the rescue. Paulina Jerockova (Anna Swerd Hansen), their beloved Nana,  needs to be moved out of the nursing home as quickly as possible—a plot point that is  factual, as one-third of all deaths in the United States took place in the close quarters of nursing homes.

Unfortunately, Erin (Julia Jolley) is off on a cruise with her husband. (“The tickets were so cheap,” to which the sisters in New Mexico respond, “Yes, because it’s a death trap!”)

There are so many funny things in this 80-minute film that I enjoyed, even if I did have to watch it at 10 a.m. after taking in some late-night action.  I was just relieved to discover that it wasn’t a grim documentary about  being a prisoner in Syria, surviving and suffering from a terrible illness, or being sent to jail for 6 years by the government. When the title is “Recovery,” all things are possible. But—-happily—this one is a comedy and a good one.

First, there is a sub-plot about the class mice. Before the duo rides off to rescue Nana, Jamie must make arrangements for the mice to be cared for by one of her students’ families. Fourth grader Jacob Harper promises to take care of the mice, Bert and Ernie. It turns out that Ernie should have been named Ernestine and gives birth to mice babies. This does not go over well with Mrs. (Ainsley) Harper, who threatens retaliation. (This is all cell phone conversation.)

Second, there’s a funny bit about the girls really getting into their music and pounding on their car horn as they tool down the Interstate. Next to them on the highway is an elderly man on a motorcycle. The girls roll their window down to explain their innocent exuberance and apologize. Thinking that they are honking AT him, the Hell’s Angel senior spits through the open window of their car.  The panic over strange spit is merited and very funny.

Third, there is the potential hottie “Scott,” of whom Blake says, “I seriously met him at the worst moment in history.” After sending Scott several funny (but meant to be endearing) memes, she gets a text from Scott’s roommate, saying Scott has died of Covid-19. Not funny and not true.

Scott has simply panicked. He tried to think of a way out of responding appropriately to Blake’s memes. His idea of an “appropriate” response is, [after revealing that he is NOT dead] sending an inappropriate personal picture and then texting Blake to ask her for her Hulu password. (Someone calling himself “LibraryGuy” once sent me a completely unwelcome nude shot. Use your imagination.)

The excuse for Scott’s inexplicable behavior? “He’s probably just stressed about Covid.” That, or he is incurably out-of-it, but the lengths to which Scott has gone do come off as funny in the expert comic hands of our two leads.

Then there’s Nana’s dog Bruce. The girls need to collect Bruce along the way, since Nanna is fond of the dog that has been being cared for on a nearby farm.

Nanna has also been very fond of Fred, a fellow inmate in her nursing home. Fred has been making nightly visits to Nanna’s room. The girls are very explicit about telling Nanna NOT to let Fred in, as he may have the coronavirus.

Blake and Jamie try desperately to be the first family members to reach Nanna’s nursing home before Erin,  the older sister from the cruise ship, arrives. That, too, presents some humorous situations, which the girls explore to the fullest. [I could really relate to the cruise ship scenario, having just come back from a cruise to Alaska before all hell broke loose with the coronavirus].

There is also an interlude where Blake races off and divests of the jumper shorts she is wearing. I don’t know what the accurate term for this fashion choice is, but, when pregnant, I called it my “Humpty suit.” It is largely shapeless, with straps, and very comfortable. Blake takes her outfit off and throws it into a tree, declaring them to have been “too chafey.” Also funny, although largely because of the talent of the comedy duo.

I also really enjoyed the simple asides about how Nanna used to drive her car by using a mop handle on the accelerator. (I had a friend who used a brick, but nevermind that story.) And then there’s the “go-to” strategy for periodically distracting older sis Erin by asking her to share “the birth story.” [Every family has a similar family member that will set the member off on a long stroll down memory lane.]

“Recovery” was genuinely funny and well done. I had forgotten exactly what this one was about. Stumbling out early in the morning to view it after struggling through drug overdose stories,  Isis captivity stories and  horrible illness films (most notably, multiple sclerosis), I was delighted to start my day with a smile with “Recovery.” Try it; you’ll like it.