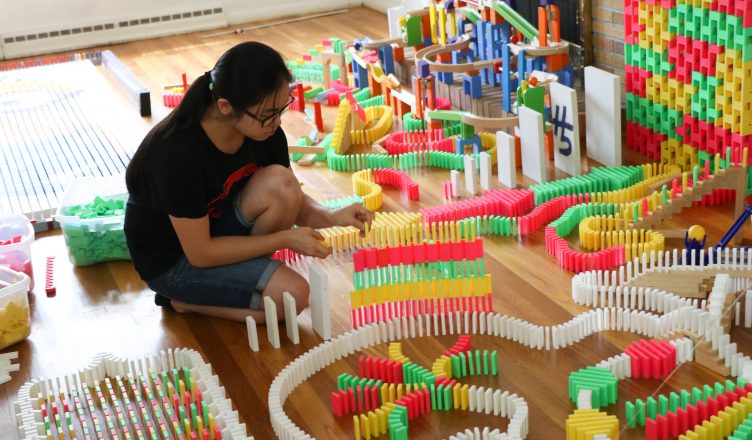 My favorite film of the first day of SXSW Online Film Festival was “Lily Topples the World.” It is the story of Lily Hevesh, who posts her domino art under the name Hevesh5 on YouTube. At one point Lily shares that 100 dominos cost $10 and I wondered how much money she has tied up in the tools of her trade.

As the film opens Lily is entering Rensselaer Polytechnic Institute as a student—a somewhat famous one as the professors know who she is. (She later shares that she is probably going to drop out to pursue a career doing what she loves: domino art).

Her domino art—a pursuit since her days in elementary school—has attracted over 101 million views and her fans include actors Hugh Jackman, Will Smith and Jimmy Fallon. Will Smith used one of Lily’s creations in a film and Lily was hired to create one for Jimmy Fallon’s Tonight Show and, also, for Katie Perry.

Adopted in 1999 from China by a loving family in New Hampshire, Lily was an abandoned child, the result of China’s “one child” policy that saw parents sometimes, abandon female infants. There was no identifying information left with little Lily. The only thing that her loving parents noticed about the young girl was that she seemed to have a continuing fear of abandonment. Lily’s dad, Mark, co-produced the documentary and he and Lily are shown shopping for a toy company to help develop a Lily Hevesh brand of dominos for stores that Lily would promote to her many followers.

Lily herself says, “Dominos have helped me to become a better person. I’ve found myself because of dominoes.” Indeed, a small tribe of fellow domino geeks appear onscreen both setting up the art and chatting with Lily.

She has, indeed, found herself and—in the process of delighting in her childhood hobby has become the acknowledged master of domino art. Lily was hired to produce a large installation for the Jimmy Fallon Tonight Show and another promoting the lottery in Washington state.

The music used to accompany the triggering of Lily’s many projects is particularly appropriate. It is original music composed by Carly Comando of Deep Elm Records.

As the documentary ends, Lily has cut a deal with a toy-maker and her dominos are appearing on store shelves. It is a happy ending to a happy story.