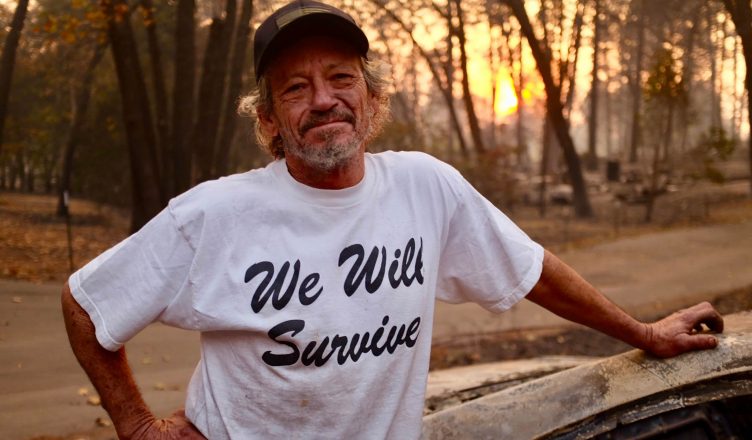 Brad Weldon is the “hippie star” and narrator for a long documentary about the California wildfires entitled “Bring Your Own Brigade” ( BYOB.) Brad fought the Camp Fire of November 8, 2018, for 7 or 8 hours to save his house, likening it to “fighting an elephant with a piece of spaghetti.”

In the course of this 127 minute documentary by London-born director Lucy Walker there is riveting personal testimony and eerily beautiful cinematography (kudos to cinematographers Fenwick, Delaney and Smith), of entire hillsides on fire or the sun sinking behind the mountains with a smokey wasteland conjuring up images of Dante’s “Inferno.” Walker is a 2-time Oscar nominee for her documentaries and a 7-time Emmy nominee (she won once). Educated at Oxford and New York University’s Film School, she is known for “The Crash Reel,” “Devil’s Playground,” and “Waste Land.”

Those who lived in the ironically-named Paradise, California, were sometimes told to evacuate, sometimes given misinformation on the phone, and sometimes trapped without hope. Brad Weldon talked about “angels” being responsible for his home’s survival.

After the fire, Brad threw open his doors to 20 of his homeless neighbors. His 90-year-old elderly mother, blind and unable to walk, is shown throughout the film, with Brad tending to her needs, including some cannabis cookies that ramp up the entire thought that a commune of sixties hippies inhabited the town of 26,000 residents located 85 miles north of Sacramento.

On November 8, 2018, eighty-six of the town’s residents died in California’s deadliest wildfire, called the Camp Fire. Paradise residents either received inadequate warning to evacuate or chose to stay, but when they all attempted to leave at once on the narrow roads, the result was pandemonium and chaos. One resident, mentioning that Paradise was one of the few California towns with no sewer system, made the comment that the town “can’t even get its shit together.” In fact, the town did have an evacuation plan that they had actually practiced, but no one factored in that it would affect the entire town simultaneously.

That verdict is borne out by the scenes of panicked people describing horrific scenes (“the side mirror on my car melted”) and the remarks of a local architect (whose house was NOT built of wood) who said, “You can tell something is going horribly wrong.” Were it not for an enterprising firefighter who used a bulldozer to push flaming cars off the road so that others could escape, the casualties might have been even higher.

Only 5% of the local buildings escaped fire damage. The city council, during a meeting, pointed out that 55% of the homes built after 2008 survived, while only 9% of those built before 2008, citing more stringent fire safety rules and regulations, and calling for more such cautionary measures for the future in the face of local resistance. As the director said, “Self immolation under the mantra of personal freedom.” I couldn’t help but find the situation similar to today’s Congressional stand-off and the inability of the town’s residents to see that the 5-foot fire break requested by local fire officials would not really infringe on their personal freedom all that much, but could have helped save their homes.

The first one-third to one-half of the film is gorgeously filmed with truly breathtaking cinematic images. It is hard to look away from the “400 foot fire tornado” as it races towards the people and the roads. The scenes of burned land after the fire are like the apocalypse. The “extraction crew,” who had to remove dead bodies from the cars that could not all manage to get out of town at once, were shown at work and talking about the soul-crushing work.

The first 45 minutes of the film is phenomenal. The last 82 minutes, which talk about the fire’s origins, the post-fire town, and the future, drag. The documentary moves on to ponder several questions:  How did this happen? What were the causes? What can be done to stop something like this from happening in the future, if anything? Is there a widening gulf between the “haves”—[like Kim Kardashian, who shares that she and Kanye hired a private fire force]—and the have-nots, who waited for help and got none. It’s worth mentioning that Paradise, which was all but totally destroyed, had homes whose median value was $200,000; it suffered 28 times the casualties of Malibu (3 dead), where homes clock in at $3.5 million.

The entire scenario seemed part of Trump’s America with “YOYO” (you’re on your own) the philosophy of survivors. Amazingly, those onscreen who were asked about global warming and its contribution to the proliferation of fatal fires pronounced that global warming was “a hoax,” just as fervently as did those who declared Covid-19 to be a hoax, right up until their relatives or friends died from it. In this case, however, the residents who have just lost their homes to the fire still deny climate change. At least there were many alternative theories and facts presented to give them some ammunition in their denials. The forest fires have been happening in the 40s, 50s, 60s and 70s and none other than long-dead celebrity Zsa Zsa Gabor is seen in a brief cameo discussing the first of many years ago. 22 died in Santa Rosa in 2017; 22 died in the Thomas Fire.

At the very end, there is a hearkening back to the ancient wisdom of native peoples, such as the North Fork Mono Tribe or the Karuk people, whose ancient wisdom might well be tapped to prevent such future catastrophes. The PTSD of the firefighters is articulated by one of them named Phil who talked of the suicide and divorce and other symptoms of having tried their best and yet being blamed for their failure to control Mother Nature; Phil died 6 days after making the remarks.

It’s a very good look at the causes and the potential cures, with a great deal of history mixed into the final two-thirds of the film.

Gorgeous cinematography. Riveting real-life drama. Food for thought. What’s not to like?

2 thoughts on “SUNDANCE 2021: “Bring Your Own Brigade” by Lucy Walker”