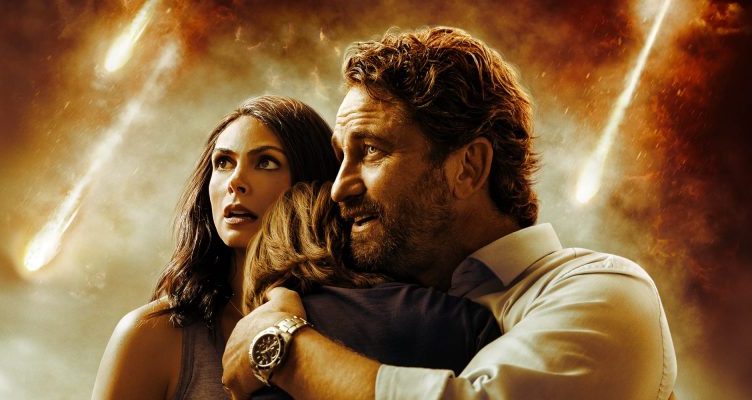 For all movie buffs, here’s an action-disaster from STX Entertainment. Greenland, starring Gerard Butler and Morena Baccarin takes you on a roller coaster ride. A comet nicknamed “Clark” approaches the Earth with its fragments ready to hit and cause mass extinction, and Butler’s character is shown running around with his family to seek shelter in Greenland. The most thrilling part about this movie is that it has been framed in such a way that it looks like this level of destruction may actually happen someday!

If you think that this is one of those Robert Duvall or Bruce Willis movies involving nuking the comet from inside out, you are wrong. NASA seems to have gotten over the idea of hiring a crew for space travel and nuking comets.

Greenland’s plot revolves around John Garrity (Gerard Butler), his estranged wife Allison (Morena Baccarin) and their seven-year-old diabetic son Nathan (Roger Dale Floyd) who try to outrun a comet whose fragments started causing destruction all over the Earth. The terrifying part is that a giant fragment is set to hit near Western Europe in 48 hours, which is big enough to cause human extinction. John, who is an Atlanta-based expert structural engineer, has been selected by the government along with his family to join other valuable personalities to seek shelter in a military safety underground bunker located somewhere in Greenland.

Maybe the government thinks that the bunker is capable enough to save all these people from the high-collision impact? Well, this concept reminds me of the fact that as dinosaurs went extinct when a comet struck the Earth millions of years ago, certain small species survived by seeking shelter in caves or underground spots. So this idea sounds practical to some extent, but things don’t look so simple as they face a lot of obstacles during this government-operated ride to Greenland. The general public becomes aware of this plan and this creates mass-panic along with the issue of the fragments falling out of the sky causing a lot of destruction.

A lesson to learn

A good thing about Greenland is the concept of familial bond. It indeed shows that family comes first. This movie can be a lesson for estranged couples or those involved in family conflicts. It portrays the bond of love and care that families have towards their members during the time of disasters or hardships, no matter what situation they may be in.

A monotonous plot, that may make you feel bored!

I personally feel that Greenland with its two-hour runtime is not likely to be as fortunate as earlier Hollywood comet movies in creating an impact among the audience that may keep them thrilled. You may start feeling a bit bored as the plot is equipped with a lot of family drama, to the extent where you may start thinking, “Why this is happening?” For a while this turns into a road movie where two parents try to reunite without taking the benefits of cell phones. In fact, this movie appears to me to be a kind of “asprin thriller” where you may start thinking, “If this gets any worse, I need to take an asprin”. Take for instance a family being reunited and again getting separated in the chaos as they leave their son’s insulin in the car and John goes to get it. What more trouble can one ask for in a disaster scenario?!

The cast and crew need some applause

Apart from the movie’s unexciting logistics within an exciting plot, the cast and crew need some credit for making it as thrilling as possible. Director Ric Roman Waugh and screenwriter Chris Sparling should be complemented for their restrained approach towards showcasing a devastating on-screen carnage. Child actor Roger Dale Floyd has played his role well as a diabetic kid of estranged parents along with his immense fascination towards “Clark”. As for Butler, his “ordinary guy” character can be seen possessing skills like driving, grunting, taking fireball impacts and fighting off goons with a claw hammer! This movie also stars Scott Glenn, David Denman and Hope Davis.

The cinematography by Dana Gonzales is amazing as it showcases some intense extraterrestrial fireball-impact visual effects. However, editor Gabriel Fleming could have done better on his part by making this film’s runtime more compact and less monotonous.

The end may leave you wondering, “What’s going to happen?”

The final reels show the family making their last dire effort to cross the Canadian border to an airspace where it has been rumored that some planes are flying survivors to the safety location in Greenland. So, this may leave you pondering whether they will finally survive the impact or not. Whatever the case may be, we are more than ready for the giant fragment to hit. Just bring it on, Clark!