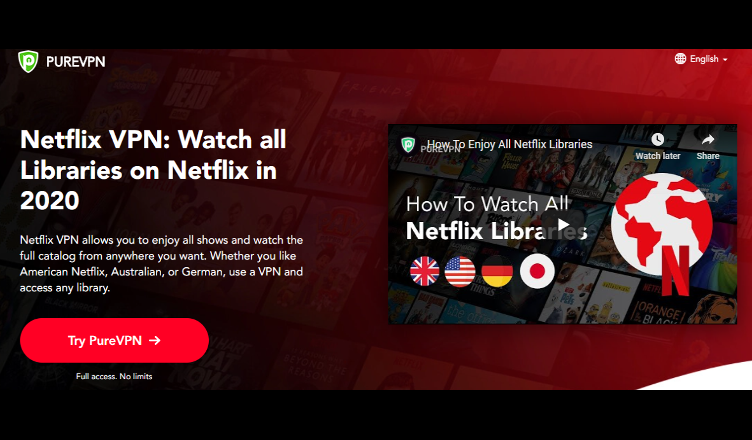 We highly doubt that you feel satisfied with the Netflix catalog available in your region. Depending on your region, you may have access to 20% to 30% of Netflix’s actual catalog, or 50% at the most if you are lucky.

We know that it is boring and way beyond frustrating for savvy Netflix streamers. But it cannot be helped because Netflix has put geo-restriction on most of its libraries, except in the US, where 100% of its catalog is accessible. It doesn’t feel fair.

You pay almost the same as they do, yet you can access only a fraction of the catalog. Well, you don’t need to feel down because you can get past Netflix’s geo-restrictions with a VPN.

If you already know that and looking for a VPN that can allow you to access the American version of Netflix plus some added regions, you are in luck. For only $1.32 a month, PureVPN promises you seamless access to up to 7 Netflix libraries all year round.

Netflix is a household name across the globe for its unparalleled streaming capabilities and catalog. The granddaddy of the streaming industry boasts hundreds of thousands of hours of TV shows, movies, and docu-series, to name a few.

Netflix has spread its roots in almost every country globally, except a few, such as China. However, only the US netizens get the lion’s share, while the rest have to be content with what they have due to geo-restrictions.

But you don’t need to blame Netflix for that. Netflix is only complying with the agreement it sets with the studios and publishers, and according to that, the streaming service can’t broadcast content where it isn’t allowed by the publishers.

VPNs come with an inherent functionality of switching your IP address, and thus, your virtual location. When you run a VPN, you get a list of locations you can connect to. The location you choose, the VPN assigns that location’s IP address to you, making it seem like you are browsing from that location.

VPN uses the same functionality to trick Netflix into believing that you are accessing its library from, let’s say, the US. As a result, you can easily get access to US Netflix. But due to Netflix’s strict proxy monitoring policies, getting past Netflix’s firewall isn’t that easy. Well, not unless you are using PureVPN.

While other VPNs give you little to no access to the American version of Netflix, PureVPN promises you seamless access to US Netflix along with six other libraries, including the UK, Canada, Germany, France, Japan, and Australia. And it is super easy to do that with PureVPN. Here’s how:

PureVPN is a well-trusted VPN that boasts stellar 4.8/5 ratings on Trustpilot, plus 11,000+ excellent reviews. Moreover, you get a straight 31-day money-back guarantee, which means you get enough time to test unblocking and streaming multiple Netflix regions with PureVPN.

Plus, you also get:

You are lucky to experience a premium VPN brand, PureVPN, at a fraction of the cost. On this Black Friday and Cyber Monday, PureVPN is offering its super-extended 5-year subscription for only $79, which breaks up at $1.32 per month. 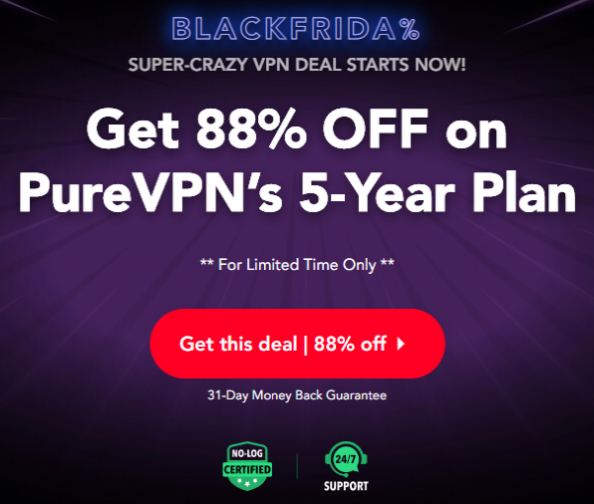 This is the cheapest VPN deal you can ever get for any premium VPN brand. So, we suggest you act now and subscribe to PureVPN for unlimited access to Netflix and 100+ more streaming services.