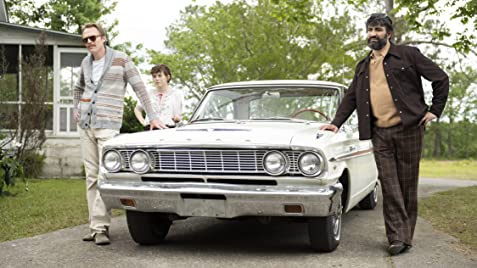 Seems to me that Paul Bettany has received a major boost from playing Jarvis and Vision for the Marvel Universe and hence is able to carve out his career in a second wave. Now he finally has a chance to showcase his talent by playing the titular Uncle Frank in Alan Ball’s heartfelt and hilarious road dramedy “Uncle Frank”.

The story revolves around teenager Beth Bledsoe (Sophia Lillis) who went to study at New York University where his uncle named Frank (Paul Bettany) is a revered literature professor. Only to her astonishment does she find out that Frank is gay and lives in secretly with his partner Walid Nadeem, who is also known as Wally (Peter Macdissi). The sudden news of his father’s death made Frank reluctantly return home with Beth to attend the funeral. There he faces a long-buried trauma that he had been running away from his entire adulthood.

Uncle Frank’s trailer is beautifully framed and tells about the entire movie in itself. It is packed with numerous family scenes that will give you some deep understanding about family issues. The gay love story between Frank and Wally has been portrayed in a comical manner. The cute gay couple along with the beautiful Sophia Lillis plus the astounding landscapes make the trailer look promising enough. Seeing Paul Bettany as a gay is astonishing in itself. Just imagine Vision as a gay uncle! Interesting, isn’t it? Do watch that shot in the trailer where everyone’s like “Who’s Wally?” and Wally introduces himself as Frank’s nephew!

The only movie that displayed gay relationship in depth was Brokeback Mountain and I’m expecting the same from this movie upon watching its trailer. What’s more, watching the full trailer gives me the idea that this masterpiece is indeed going to have a balance of comedy and drama incorporated within a classic road trip movie. It also stars Judy Greer, Steve Zahn, Lois Smith, Margo Martindale and Stephen Root.