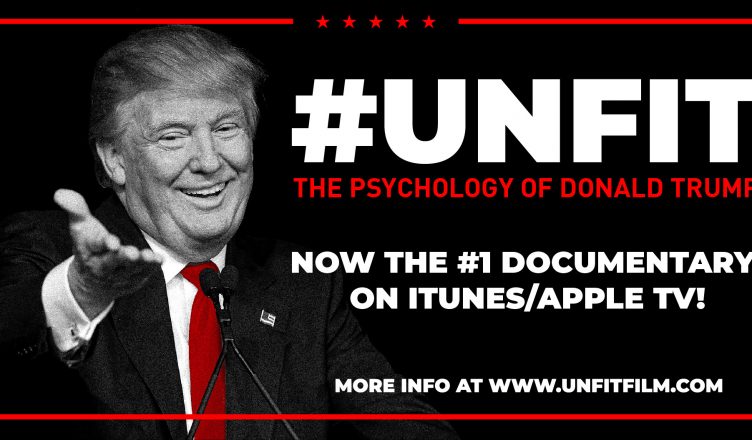 The documentary “Unfit,” (now available for rental on Amazon Prime) is the perfect companion piece to Mary Trump’s (DJT’s niece) book “Too Much and Never Enough” explaining Donald J. Trump.  Both informative works feature trained professional psychiatrists or psychologists answering George Conway’s (Kellyanne Conway’s husband and founder of the Lincoln Project) question, “What is wrong with him?”

Right now, what is wrong with him is that his stubborn denial of the science and refusal to wear a mask routinely in public (first worn on July 11th) has landed our chief executive in Walter Reed Hospital with Covid-19. This happened just three days after making fun of former Vice President Biden for wearing a mask in public.

Dan Partland’s documentary, inspired by an article in “Rolling Stone” wants to know what causes Donald Trump to “go off the rails.” We all saw this behavior in real time during the September 29th presidential debate—which wasn’t very presidential at all and certainly put the “off the rails” behavior on full display for the nation and the world.

After a discussion of the Goldwater Rule, which came after the 1964 election when Barry Goldwater’s reputation for wanting to use nuclear weapons caused some mental health professionals to use terms that were libelous and slanderous. Goldwater sued and won. The slogans like “In your heart you know he’s right—-far right” were discredited and an unwritten rule arose that the professional psychiatrists and psychologists should refrain from diagnosing those who were not in their care. However, as the film attests, “We never intended it to be a gag rule.”

The truly unique nature of this year’s issues caused the formation of a group of professional psychiatrists and psychologists who formed a group called “Duty to warn.” Like the Lincoln Project, this group of mental health professionals set out to warn about the clear signs of a malignant personality disorder in Donald J. Trump.

What are the signs of a malignant personality disorder? 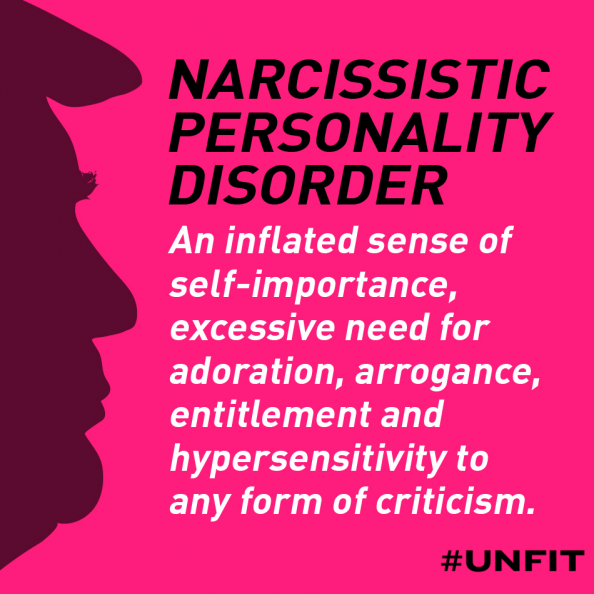 The narcissism is pretty clear. Trump constantly tells us he is “a very stable genius” and nobody can do whatever it is as well as he can. 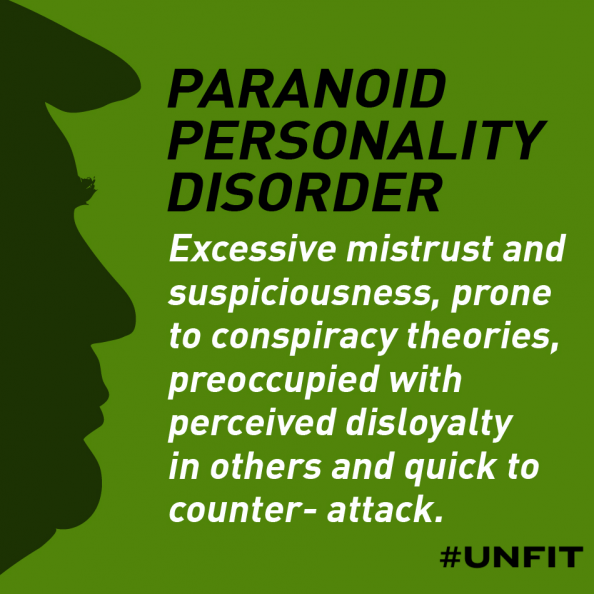 Donald J. Trump’s devotion to conspiracy theories formulated by groups like QAnon and his constant whining about how unfairly he is treated contributes to his sense of paranoia.  Trump is quite concerned about his recent diagnosis of Covid-19, and justifiably so,  and that that is why he was helicoptered to the hospital. However, Trump has bought into a lot of conspiracy theories and demonstrated how incorrect his judgment can be with stands such as his accusations against the Central Park Five and his starting of the Birther Movement, insisting that Barack Obama was not a U.S. citizen. 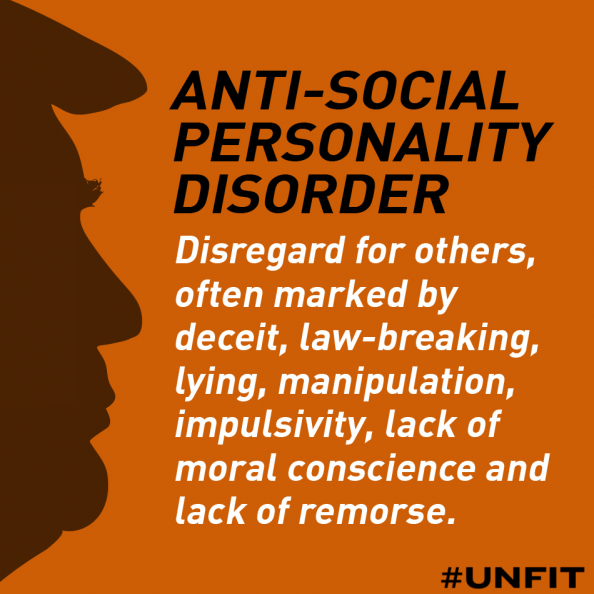 Trump does not seem like “a people person.” He has been far more astute at mocking and making fun of his enemies than in demonstrating any compassion or empathy for those who are suffering and has few close friends. This tendency helps explain why he doesn’t seem to radiate the emotional depth of someone who really cares. His lack of remorse and refusal to accept responsibility for missteps or misstatements is correlated with this disorder. Trump has wed three times in his 72 years. One analyst used a line from Macbeth: “Those he commands move only in command, nothing in love.  Now does he feel his title hang loose about him, like a giant’s robe upon a dwarfish thief.”

Tony Schwartz, who really wrote “The Art of the Deal,” described Trump as a sociopath and said, “He doesn’t feel anything.” This is in keeping with his actions when his older brother, Fred, lay dying and Donald went off to the movies instead of spending time with his dying brother, according to niece Mary Trump. DJT seems to take a perverse glee in taking petty revenge against those he thinks have wronged him.

Director Dan Partland has assembled a stellar cast of mental health professionals, including John Gartner, PhD, the founder of Duty to Warn; Lance Dodes, M.D., a Harvard graduate from Boston; Justin Frank, a Harvard grad in charge at George Washington University; and some better-known faces like Anthony Scaramucci, who noted that DJT is “a reflection of the cultural zeitgeist.” Bill Kristol, a Harvard PhD who served as Chief-of-Staff to former Vice President Dan Quayle; Richard Painter, who worked under Bush, and Malcolm Nance (author of “Defeating Isis”) are also featured, commenting on the president’s bullish, obnoxious, arrogant, narcissistic behavior, visible to the world at large.

The documentary is riveting, well-edited, has great music and great cartoon segues and is a must-see film before you vote on November 3rd.

Dan Partland, who is the Writer/Director/Producer of “Unfit,” is a much-decorated documentary filmmaker, who has been lauded for his work for over twenty years. In the 15 years that the Emmys have recognized primetime nonfiction series, Partland’s shows have been nominated for best in class 5 times, and in 3 different sub-genres; Reality, Nonfiction format, and Documentary. Partland has twice won nonfiction series Emmys and in 2011 and 2012 was nominated by the Producers Guild of America for Nonfiction Producer of the Year. In 2001, Partland won an Emmy (Best Non-Fiction Program) for his work on the ground-breaking 13-part doc series American High on Fox. Partland served as the Supervising Producer and a Director of the critically acclaimed show that is widely regarded as one of the progenitors of the current doc series genre.

Partland’s work has spanned several nonfiction genres.  He produced and directed How To Raise An Olympian, a winter Olympics special for NBC and was Showrunner for the multi-award-winning CNN archival series The Sixties. Partland was the Executive Producer and Showrunner of A&E’s Intervention for over 150 episodes, garnering countless awards and accolades including the Emmy for best reality series.

Dan Partland will be a guest with me on my Bold Brave Media Global Netowrk podcast, Weekly Wilson, on Thursday, October 15 from 7 to 8 p.m. (CDT) “live.” It is a call-in format (866-451-1451) and the podcasts are later posted on both BBM’s page and on WeeklyWilson.com.