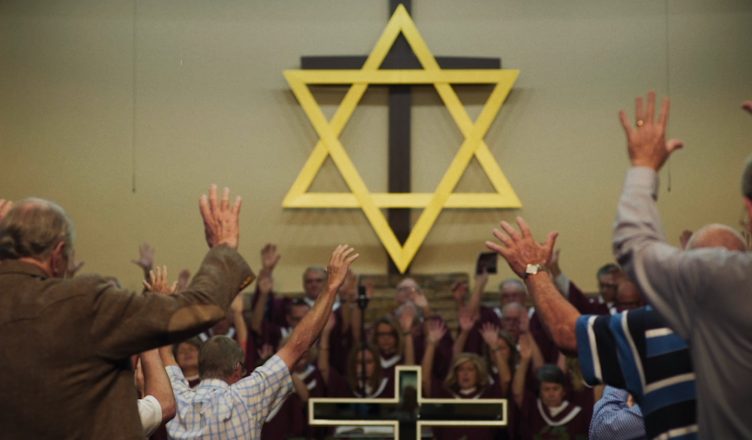 “Til Kingdom Come” has played both the 56th Chicago International Film Festival and the 43rd Denver Film Festival, spelling out the close relationship between evangelical Christians and the Jewish community in Israel. The 77-minute film is directed by Director Maya Zinshtein.

It’s difficult to understand how this symbiotic partnership has flourished, given the prophecies in evangelical texts that have 2/3 of Jews being killed and 1/3 ultimately converting to the evangelical view of things, in the final analysis. The film’s write-up says, “They donate sacrificially to Israel’s foremost philanthropic organization, the International Fellowship of Christians and Jews, because they fervently believe the Jews are crucial to Jesus’s return.”

There are also the disturbing positions of evangelicals on same sex marriage, gays, legalized abortion, and many other issues, including the Arab Palestinians’ right to live peacefully on the West Bank. (This is the issue that Vanessa Redgrave championed, to her detriment, many years ago when she was receiving a 1977 Best Supporting Oscar for her film work in the Holocaust drama “Julia.”)

At the outset of the film, we hear rural Kentucky Pastor Boyd Bingham IV say, “We are the people who brought DJT to power and he pushes our agenda.” It should be mentioned that VP Mike Pence is a noted evangelical, as is Secretary of State Mike Pompeo.

According to the film, there are 650 to 800 million evangelicals around the world. They have single-handedly become some of the biggest donors to Israel, raising $4 and $5 million at a crack, even while, on the film, an official from Louisville, Kentucky, proudly proclaims that the state is now down to only one facility where a legal abortion can be obtained. (Shades of the sixties!)

There is film of the youngest Bingham preacher at the Binghamtown Baptist Church on a 1982 pilgrimage to Israel and his great joy at the moving of the Israeli consulate to Jerusalem. (It is Israeli Premier Bebe Netanyahu’s goal to annex the West Bank.)

Two million Arabs live under Israeli sovereignty in Jerusalem now. When the embassy was moved, 58 PalestiniIsrans were killed and 2,771 were injured, all in protest of the move.

It was an interesting documentary, which is more than I can say for “I Am Greta.”

One thought on “Til Kingdom Come: Interesting Explanation of Evangelical Support of Israel”