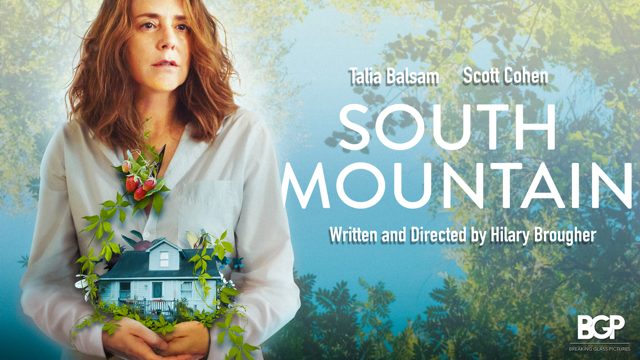 Talia Balsam startles as Lila, an eccentric and enigmatic woman struggling to cope with her fragile mentality and fracturing family in the new domestic drama “South Mountain”.

Hilary Brougher’s main gig is professor of graduate film at Columbia University. Her side hustle, writing and directing independent movies, has, over nearly a quarter century, produced three largely well-received projects, “The Sticky Fingers of Time”, “Stephanie Daley” and now “South Mountain”. I recently asked Brougher a series of questions about her latest cinematic work.

“South Mountain” is unusual, both in terms of subject matter and physical setting. Fresh. Largely unexplored. At least in this way. Where does this story and the way you choose to tell it originate?

Prior to this I’d come from a work-for-hire type situation that wasn’t healthy for me as a creative person, and I was looking for a project I wouldn’t have to wait 10 years to make so I could get back on my feet and brush myself off… And the way to find that opportunity seemed to be to write for what resources I had access to — and just make it happen. I had already experienced two wonderful indie production experiences (Sticky Fingers of Time 1997 and Stephanie Daley, 2007), which you wouldn’t call large unless you compared them to this one! So I was curious next in seeing how far I could take a very small footprint production (small crew and budget) with the technology that has emerged in the last decade. My best available resources were my mother’s ramshackle house in the mountains, my husband Ethan, (a cinematographer) and a few close collaborators who I hoped would help me along. It turned out by giving myself a few strict parameters — shoot in one location, use natural light w/no night shoots, I ended up giving myself a lot of creative freedom and autonomy. In terms of the subject matter — the house as a location resource, meant this would need to be a film about family. The film is by no means autobiographical, but its characters and themes are all familiar and dear to me, and have personal currency.

Talia Balsam and Scott Cohen are equally excellent in their respective lead roles. These are two considerably underrated talents in my opinion. They are each so gifted and never appear to be acting here. Please talk about working with the pair. Were they on your ideal casting wish list?

I was connected to Talia and Scott through Barden Schnee Casting in NYC. We found them quickly as it became clear we had our tiny budge at last! They had worked together in the past and were very comfortable together. Talia and Scott are extraordinarily skilled actors and while we didn’t have a ton of time for rehearsal, they prepped intensively on their own and arrived were ready to go and also at the same time ready to trust the journey. They’ve both said the vibe/environment of the set helped. As we filmed in my mother’s house, the trappings of “real” family life were everywhere, including the overgrown gardens, and many of the props and dressing that stayed with the house. There was also my own teens who played small roles and helped out on set. (Note: again, Ethan is their Dad, my husband, and the film’s Cinematographer). so again – real family everywhere. We were a very small production, using mostly natural light, so we moved “fast.” At night – most of us stayed at a big house and we all fit around the same dinner table.

Lastly, we were able to shoot more or less in sequential order as we slowly re-dressed the house as the film’s “summer” progresses… This is a rare luxury in indie filmmaking, and I think it really helped the whole cast (and crew) build a sense of history, connection and momentum.

The ending is certainly open to audience interpretation. Can you share what it is you’d like to leave us with as “South Mountain” concludes?

I wanted us to feel the change that happens to Lila and also leave room for viewers to project their hopes for her future on that moment. While making the film, I thought of it as an inverse love story — a love story about breaking up, and the “happily ever after” is her letting go, so yes, an ending embracing uncertainty.

There’s also the landscapes at the beginning and the end. With that material I wanted to remind watchers that our stories are part of something much larger — the natural world, because personally I find that comforting. And despite the scary, dark moments in the film, its intention is to offer hopefulness.

I’ve stopped asking “What’s your next project?” as no one can ever confide such. I get it. So I’ll ask what inspires and excites you personally about writing and directing your own creative projects?

I’d like to keep working in this personal, small-footprint way, bringing in elements of my real lived life. But even at a low budget — it’s hard to find financing, so the likelihood is I will need to keep pushing into even smaller, weirder productions.

Make more films, Ms. Brougher. Our world could use steady doses of your uniquely creative voice.