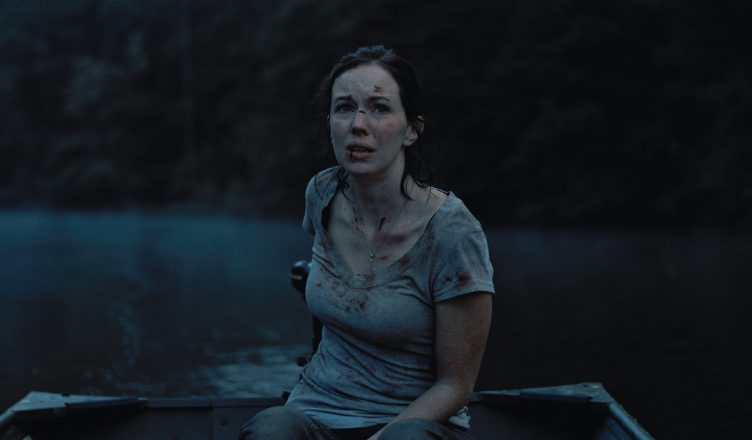 The new crime drama “Blood on Her Name” may best be summed up thusly:

And it’s not lookin’ too good for the pattern to end with a miserably misguided kid in this stark and unsettling story.
“Blood on Her Name” is the feature debut from filmmaker Matthew Pope, who shares co-writing credit here with producer Don Thompson. Together they founded the independent production house Rising Creek.

I got a chance to interview both Pope and Thompson. I began by asking about their inspiration.

“Blood on Her Name” tells the story of a family unable to break a continuing chain of violent death. Please share what went into making this the overarching theme of your film?

MP: There’s a certain fatalism built into the choices made by many of the characters. Maybe they don’t really want to do something, but they don’t see another way forward. All of the main characters have to deal with that tension between who they believe themselves to be and what they’re willing to do to protect the people they love. The stakes here may be higher than what most of us typically deal with, but squaring that circle – holding on to this notion of our inherent goodness despite the things we do and the choices we make that hurt others – is something I think we all regularly do.

DT: I think a lot of what went into it for me was considering questions of legacy– how we’re influenced by those closest to us and how we influence others. Like Matt pointed out, the question is considered in high relief in the film, but it’s something we all deal with. When we were building the DNA of this thing, my wife was pregnant with our first kid. I think some of the fear new parents feel on realizing how thoroughly they can screw this all up made its way onto the page.

Bethany Ann Lind is outstanding in a grueling lead role here. I know she’s very accomplished as a stage actress. Talk about directing Lind in what I believe may be her first central motion picture character role. Were there any particular challenges for you, Lind and the film making team translating this story from a movie production perspective?

MP: I’d worked with Bethany before and knew she could carry the film. We actually wrote the character with her in mind because we believed so much in what she would bring to the role. But yeah, she hadn’t necessarily been given the opportunity to show the full extent of what she could do on film even though she’s always earned tremendous respect for her stage roles. The thing that might not be obvious for this role is just how demanding it was on her emotionally and physically. Normally an actor, even a lead, has the ability to take certain scenes off, to sit in a trailer or whatever while other scenes are being filmed and psychologically regroup. Bethany is in every scene in the film, and on an indie you’re continually moving, which meant for twelve hours a day she had to be on. That’s really difficult to put on anyone, especially in a role like this that requires a high degree of emotional consistency from scene to scene. I really didn’t realize how demanding it would be until we were a week or two into production. It’s a testament to her talent and resolve that she could carry the film to that degree, but it’s honestly not something I was ever worried about.

DT: Yeah, Bethany was definitely more known at the time for her stage work, but I think our primary exposure to her had been through some smaller film projects she’d worked on. We’d known her for years before we wrote this for her and I think a lot of that went not just into our confidence in her as a performer, but also into a strong baseline of trust and rapport between her and Matt. There are so many films where you sort of have to build that as you go and the process can make it impossible to focus on other challenges, or take other risks. It just wasn’t an issue on this one.

Matthew, I know you’re based in Atlanta. I watch and review a lot of films. Many of these are shot in Georgia, and the state seems to be increasingly ambitious in it’s support of the film and television industry. Would you agree and what is your professional experience working in “The Peach State”?

MP: I’d agree that Georgia is incredibly supportive of the industry when it comes to studio and network projects. They’ve built an amazing infrastructure that really could have only been done with those larger projects. I think everyone knows it’s all dependent on the tax credit though, so there’s a lot of talk about needing to nurture a strong local community of content creators and financing so that everything’s not just Marvel-sized stuff coming in from LA. In my experience that’s been more talk than action so far, but we’ll see. When it came to the nuts and bolts of production, we were able to do everything we needed to do and had a lot of local assistance in the areas we were shooting who went out of their way to help. Prior to that, developing the project and getting it financed and to the starting line, we were very much on our own. All the energy is still on the big studio projects. I’d love to see more of a concrete effort to support locally developed projects.

DT: I’m not a Georgia native, but I did live there for a couple of years while Matt and I were putting together a few stories and ultimately shot this film, and I definitely agree. Georgia’s interest in film and TV has been, quite understandably, in drawing some of those large pots of production spending into the state economy, and they’ve done really well there. The problem I think people are realizing is that big productions are a lot like traveling circuses– when it’s time to go, they just pack up their tent and move on. You see this a lot in the almost cyclical trade of major productions between Vancouver and Atlanta or any other highly incentivized filming location. One of the big draws to filming in the traditional production centers–LA and NY– is that the directors, writers, producers, actors, executives, development companies, post houses, etc are already there. People don’t have to uproot their lives to live on location for six months at a time when they make a film. That kind of buy-in is a lot harder to build, but it’s not impossible. Indie film has a big role to play there. Its impact is longterm, but it’s hard to measure and report whereas it’s relatively simple to advertise whatever hundreds of millions are spent in the local economy by major studios.

What is on the horizon now for the Pope/Thompson partnership?

MP: We’ve got a few more scripts that fit in the same “character piece wrapped in a genre film” mold we’re excited about. We like the idea of using the trappings of genre as a foundation but then telling really human, character-centric stories that stretch that mold.

Matthew Pope and Don Thompson. Two names you may wanna watch for as their mutual movie making moves forward.