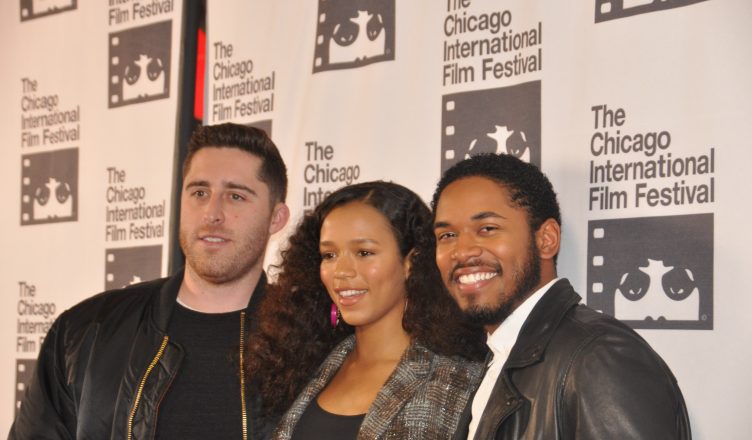 Acclaimed Writer/Director Trey Edward Shults brings “Waves” to the screen with a cast that includes both new and seasoned performers, all in top-notch form. The film’s camera work is beautiful, which is synonomous with Shults, who learned so much working with the legendary Terrence Malick. (Shults gave huge props to his D.P., True Daniels during the Q&A). It premiered in Chicago at 7:30 p.m. on Sunday, October 20th.

The screen goes  black  5 times, as though “Waves” were over, a la the Julian Schnabel-directed “At Eternity’s Gate.” When the screen goes “live” again, it is diffused with glorious displays of color, hues and images. (The credits even list a “colorist”). The color is  intensely vibrant in “Waves,” whether it is a sunset in Florida (setting for much of the film) or co-stars Lucas Hedges (“Manchester by the Sea,” “Lady Bird) and Taylor Russell as Luke and Emily, frolicking beneath lawn sprinklers that throw  off rainbow colored variegated auras. The cast includes Sterling K. Brown (“This Is Us”) as the father, Ron Williams, and Oscar-nominee Lucas Hedges as Emily Williams’ (Taylor Russell’s) boyfriend. Fellow director Harmony Korine (“The Beach Bum”) is listed in the credits as Mr. Stanley. Korine’s films are image-heavy and story-light; he lists art and painting as a significant part of his career.

“Waves” is really two films in one. You can’t tell what the movie is about from the trailer. We become vitally interested in young athlete Tyler Williams (Kelvin Harrison, Jr.) as he tries to live up to his father’s dreams for him to go to state as a wrestler and to succeed  in life. The romance between Tyler and Alexis (Alexa Demie of “Euphoria”) comprises the first half of the film. As the song in one scene put it, “What a difference a day makes.” The Wiliams family (Father Ron, Step-mother Catharine, sister Emily and Tyler) will never be the same after the Tyler/Alexis storyline plays out. One line of dialogue: “All we have is now.” (Clifton Collins, Jr., is wasted in a very small role as Alexis’ father).

The first half of the film focuses on Tyler and Alexis.

The second half focuses on Tyler’s sister Emily (Taylor Russell). Her budding romance with Lucas Hedges as Luke includes a touching scene traveling to visit Luke’s dying father, from whom he is estranged But the entire Williams family unit is affected by what occurs earlier between Tyler and Alexis.  Losing sight of Tyler almost completely in the second half doesn’t benefit the film’s plot, which director Trey Edward Shults told the audience was largely autobiographical and/or “personal,” drawn from events that had happened to him or to people close to him.

“Waves” is a cinematic tour de force, which has been true of all of Shults’ films, including “It Comes At Night,” (which also featured Kelvin Harrison, Jr. in its cast.) In the Q&A following the film, audience members got a crash course in cinematography, including camera aspect ratios. (185, 133, 240, 266, native anamorphic et. al) There’ll be more from the Q&A in a more complete review. Opens November 15th.