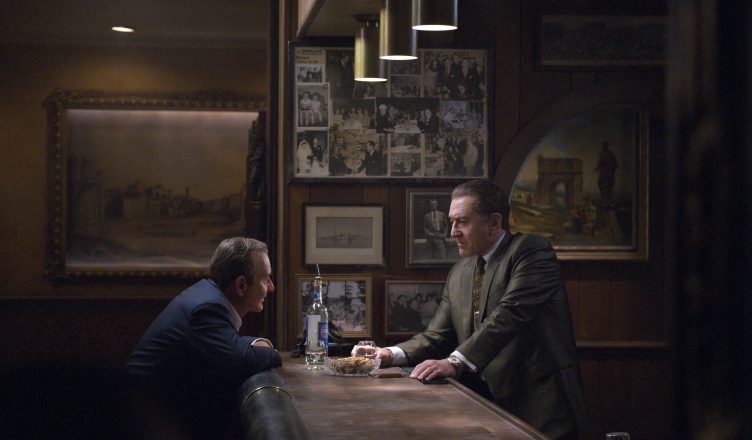 Martin Scorsese, at 77, still has it. He had a film at the Chicago International Film Festival 52 years ago (“Who’s That Knocking At My Door?”), back in 1967. Now, he’s the undisputed master of this sort of crime drama, sharing that throne with Francis Ford Coppola. The fact that the Chicago International Film Festival packed theater could be so thoroughly interested in Scorsese’s latest film for 3 hours and 20 minutes is proof that he’s not done yet.  Robert DeNiro, Joe Pesci, Al Pacino, and a host of other great actors appear in “The Irishman,” which airs on Netflix beginning November 27th   and will play in select Chicago theaters beginning November 1st. This is Pacino’s first collaboration with Scorsese, although not his first pairing with DeNiro.

When you see DeNiro and Pacino in scenes together, it’s like a Master class in acting. The story is about what happened to Jimmy Hoffa, according to the hitman who, late in life, claimed credit for killing him. The story is based on the 2004 book “I Heard You Paint Houses” by Charles Brandt, comprised of interviews with Frank Sheeran, the self-confessed hitman. Proving the story is all true is up to someone above my pay grade, but it’s a fascinating tale.

Frank Sheeran (Robert DeNiro) is a World War II veteran who spent 411 days in combat with the 45th infantry and 122 days at Anzio. He learned to kill efficiently and that skill becomes his calling in life once he throws in with Russ Bufalino (Joe Pesci) of the Pennsylvania crime family. Prior to becoming the go-to hit man for the Mob, he drove a truck delivering meat and, as he says in court about his job, (when an entire truckload of meat goes missing and ends up in Bobby Cannavale’s restaurant), “I work hard for ‘em when I ain’t stealin’ from them.”

As the movie progresses, each Mob power onscreen has a placard super-imposed that tells when and how he met his end. It is fascinating, but also hard to keep up with so many deaths, some of them in slow-motion close-up.

Jimmy Hoffa (Al Pacino) has a habit of shooting off his mouth. As he admits in Steven Zallion’s screenplay adaptation, “I get that way. I get abrupt.” Mob bosses at the top would like him to dial it back. When Hoffa is newly out of prison after a 4-year stretch for fraud, he plans to take the Teamsters Union back from former sidekick and incumbent president Frank Fitzsimmons, saying, “At the end there’s only one thing that’s real. This is my union.”

Although Hoffa is repeatedly warned that he should just take his $1.5 million pension and retire , he won’t budge. He seems to think he is invincible, that the Mob bosses (Joe Pesci as Russ Bufalino of the Pennsylvania crime family and Harvey Keitel as Mob kingpin Angelo Bruno) wouldn’t dare put out a hit on him. His attitude towards the capos In the Mafia who want him to shut up and stop making waves is a little like his attitude towards the Attorney General (Robert F. Kennedy) who is prosecuting mobsters. Hoffa says, “He’s (RFK’s) not gonna’ get what he wants. I don’t care what he wants, he’s not gonna’ get it.” There is one last attempt to talk sense to the hot-headed Hoffa, one last try at a sit-down with the gangster known as Tony Pro, Tony Provo, the Union City, New Jersey capo. Unfortunately, Hoffa and Pro can’t stand each another and their meetings don’t go well.

The cinematography is compelling and Thelma Schoonover’s editing over the years has made Scorsese’s films masterpieces. It is hard to believe that three hours and twenty minutes could go by so quickly without unnecessary draggy parts in these days of 200 minute-plus movies, but this one was so well-done that I saw no one exit early. I even had a ticket for a late-night film that would have meant leaving slightly early, but the film was too well done and  interesting to leave.

The story starts out in the nursing home where Frank Sheeran now lives in old age and it ends in the same nursing home. These is a valedictory feeling, as though Scorsese is saluting his own illustrious career, and also those of the great actors who have brought these movie characters to life. The old-timers in the cast were excellent. This longest (3 hrs. 20 mins) and most expensive ($150 to $200 million) of Scorsese’s many movies is one of his best.

The screenplay by Steven Zallion makes use of the phrase “It is what it is” frequently and creates a scene in a car that will rival Tarantino’s scene where Le Grand Royale as terminology for a cheeseburger in Paris is debated. This time, it is a discussion about fish, with Jessie Plemmons (“Breaking Bad,” “Fargo”) driving and the others talking about what kind of fish Chuckie (Hoffa’s surrogate son) had in the car earlier. (“Never put a fish in your car. You’ll never get the smell out.”)

There is also a scene discussing how you have to “spill a little beer along the way” that showcases DeNiro and Pacino, once again, and one in a restaurant where they await the tardy Tony Pro that is great. It’s such a pleasure to see these two talents  onscreen together.

The music by Robbie Roberson is spot-on, with “In the Still of the Night” still echoing in my ears. (I would have liked to have heard the Chairman of the Board crooning “My Way” at some point, but nevermind about that.) The cinematography by Rodrigo Prieto is wonderful. The visual de-aging work by Industrial Light and Magic worked  well.

While it is a pleasure to watch DeNiro and Pacino onscreen together, there are a few scenes, especially one in his office where Hoffa rants about RFK, where Al tends to go slightly overboard and off the rails. There’s even a line spoken by Joe Pesci, regarding Hoffa, that could apply to Pacino.  Russ Bufalino (Joe Pesci) says of Hoffa, “He likes to talk, don’t he?”

Pacino was never physically “right” to play Hoffa, who was a big man, but what Al lacks in stature he makes up for in sheer bluster, but in the RFK office scene Pacino risks portraying Hoffa as a total buffoon. Still, when Zallion gives a talent like Al Pacino this line: “There’s only one point. I don’t wanna’ do it and I’m not gonna’ do it” you can’t really fault Al for taking his hot-head character and making the most of it. Pacino’s in some pretty awesome company, after all. It was a shame that Harvey Keitel and Anna Paquin didn’t have more to do, but it’s an ensemble effort.

I was delighted to see that Scorsese (et. al.) can still deliver. Spielberg’s last outing in “Ready Player One” was underwhelming. Clint Eastwood may be hanging it up, Brian DePalma and William Friedkin have retired, and Quentin Tarantino is making noises about making only one more film.  But Marty Scorsese is still hitting it out of the park while treading familiar terrain. And audiences get to have a ball watching Scorsese’s latest.

It’s a great movie. It drives home this message from the script, “You don’t know how fast time goes by until it goes by.”

Writer: Steven Zallion, from the book by