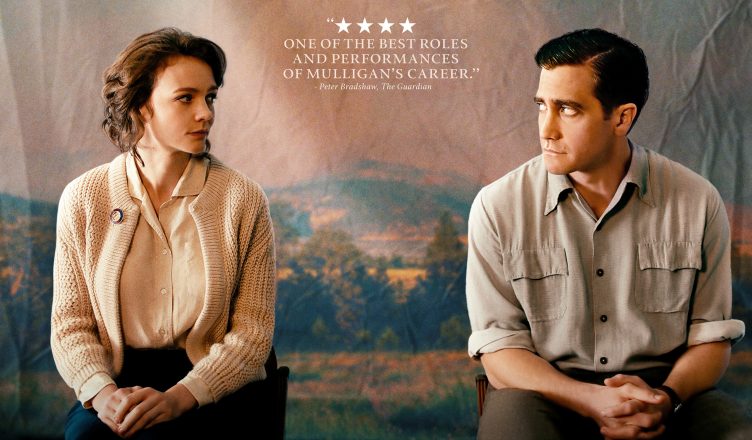 British actress Carey Mulligan (An Education, Never Let Me Go, The Great Gatsby) stars in Paul Dano’s directorial debut, Wildlife, opposite Jake Gyllenhaal. The “Hollywood Reporter” recently named her one of the eight “Best Actresses Working Today” and she is very good in this film.

14-year-old Joe is the only child of Jeanette and Jerry—a housewife and a golf pro—in a small town in 1960s Montana. Nearby, an uncontrolled forest fire rages close to the Canadian border, and when Jerry loses his job—and his sense of purpose—he decides to join the cause of fighting the fire, leaving his wife and son to fend for themselves. Suddenly forced into the role of an adult, Joe witnesses his mother’s struggle as she tries to keep her head above water.Actor Paul Dano makes an impressive debut as a filmmaker and—along with co-writer Zoe Kazan—elegantly adapts Richard Ford’s novel of the same name. Carey Mulligan delivers one of her finest performances as a complex woman whose self-determination and self-involvement disrupts the values and expectations of the 1960s nuclear family. With precise details and textures of its specific time and place, Wildlife commits to the viewpoint of a teenage boy observing the gradual dissolution of his parents’ marriage. 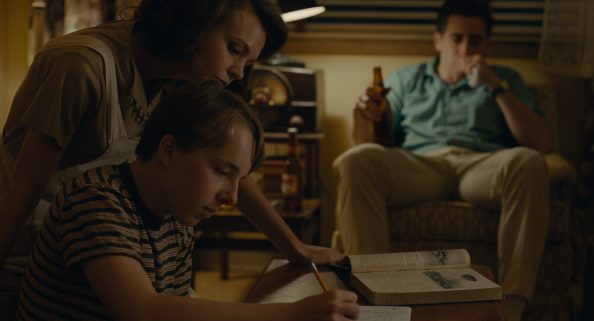 The acting in Wildlife is top-notch. It is shown through the eyes of the son (Joe, played by Australian actor Ed Oxenbould) and he does a credible job of a son watching his parents marriage collapse (although the young man looks nothing like either parent). Jerry Brinson (Jake Gyllenhaal) is always good, and he’s good here, within the constraints of the script. Some critics feel it is Carey Mulligan’s best performance to date (although I’d vote for “Never Let Me Go”). Bill Camp who plays Warren Miller, a wealthyolder car dealership owner (who comes on to Mulligan when Jerry leaves), is also good in his part.

Gyllenhaal, too, is always a dependable leading man, to the point that audiences take him for granted. He was one of just 8 actors to win a Golden Globe, a SAG award, the BAFTA and a Critics’ Choice award and then not be nominated for an Academy Award for the part (“Nightcrawler” in 2014). Other notable Jake Gyllenhaal films: “Donnie Darko,” “Brokeback Mountain,” and “Southpaw.”). Carey Mulligan does a fantastic job of portraying a 1960 housewife and mother (son Joe in the film is 14), who is forced to figure out how to keep herself and her son afloat when the somewhat irresponsible father figure (Jake Gyllenhaal) suddenly decides (with no family discussion) to go off to fight fires 40 miles away from their home in Great Falls, Montana. The pay? $1 an hour. He had been working as a golf pro, but got fired for betting with the golfers. The golf course calls him  and offers him his old job back, but he doesn’t take it. The other opportunities in town are few and far-between.

Miles Michael and Melisa Jusufi did a great job of recreating 1960-era Great Falls, Montana for Wildlife. Kudos to them.

Diego Garcia gets to photograph Montana, which director Dano described as “a divine, beautiful place.” He does a fine job capturing the big sky country.

Wildlife started playing at 6 p.m. By 7 p.m.. I wrote in my notes, “This is really boring so far.” It is true that there was a small amount of time at the outset of the film given over to presenting Carey Mulligan with a Career Achievement award, but, still, only 44 minutes remained for something interesting to happen.

Paul Dano—who earned praise for his work in “Let There Be Blood” and “Little Miss Sunshine”—wrote the adaptation with his partner, Zoe Kravitz (they recently had a daughter). The couple met while working on “Ruby Sparks.” The Wildlife script is based on a book written by Richard Ford that Dano read in 2011. It is Dano’s first foray into directing. The script just did not make a lot of sense at pivotal points. I have to wonder if the book would have explained things in a more comprehensible, realistic, true-to-life way. As Johnny Oleksinski of the “New York Post” put it, “Too much of the screenplay doesn’t ring true.”

In another review, Brian Tallerico said, “He keeps the audience engaged purely through the believability of their characters.” That, for me, was the problem. The things that occur seem random and unlikely and are not believable IRL. Perhaps it’s the book, or perhaps it’s the screenwriters adaptation of the book, but none of the characters’ actions really came off as “believable.” This is not the fault of the acting leads, but of the script. 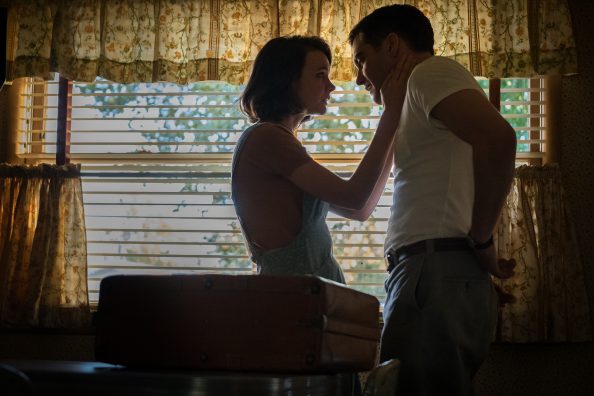 Starting out as a happy sixties family, the father figure (Jake Gyllenhaal) behaves in truly incomprehensible ways when he loses his job at the local golf course. Mostly, he sits in his car and sulks. I expected him to drink heavily (and he does a bit of that later), but, at first, he is sulking by himself and then—Eureka!—the golf club calls and offers him his old job back. So, naturally, in this small rural town with barely any jobs available at all for anyone, he turns the offer down, saying he “won’t work with people like that.” (WHA-A-A-T?)

It is shortly afterwards that, without any prior discussion with his wife or young son, he announces he is leaving for the fire front and will fight fires for a pittance ($1 an hour). This causes a scene, of course, (which Mulligan and Gyllenhaal do a great job playing), but it seems utterly unlikely to occur in real life. It also takes the very competent Gyllenhaal out of the film for a large portion in the middle of this movie about a disintegrating 60s family, and that is unfortunate.

Before he leaves, Gyllenhaal makes a comment about how the snow will put out the fires, eventually, and that turns out to be a big plot moment (i.e., the snow beginning to fall.). The depiction of the forest fire at the front is also very well done, but, overall, the actions of the father are so different from what a “real life” person would do that it is difficult to relate to it, no matter how scenic the mountains in the background.

As Oleksinski said “(New York Post): “Dano’s movie is, in many ways, solid and admirable, but awash in ‘duh.’ Too much of the screenplay doesn’t ring true.” The ham-handed line, “It’s a wild life, isn’t it, Son?” was also not a favorite. One I did like was this one, spoken by Mulligan to her husband as he announces he is going to be gone for months fighting fires for $1 an hour: “I’m a grown woman, Jerry. Why don’t you act like a grown man?”  Why, indeed? Maybe because the book gave us more insight into Jerry’s motivations which leave his wife and son without income for an indefinite period of time. (We see Mulligan inquiring about a job as a teacher early on, and learn that there is nothing available in this remote town.) 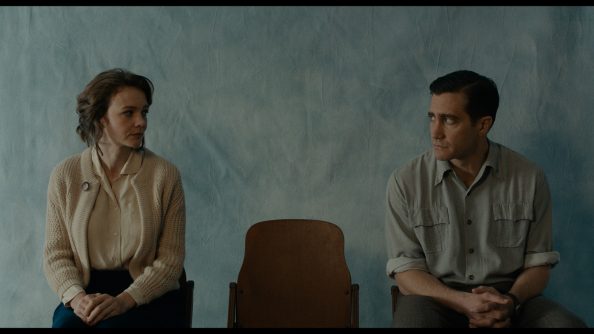 While Gyllenhaal is away at the fire front, even more incomprehensible actions on Mom’s part occur, with son Joe along as a spectator. From upright young matron, Jeanette (Mulligan)  is suddenly dining at the home of local businessman Warren Miller (Bill Camp), son Joe in tow,  flirting with the older man. Her son is an appalled witness. The dress she is wearing leaves little doubt that she has set out to enthrall the older (and much more solvent) businessman, but it’s a 180-degree turn in behavior from everything that has gone before. We are left to assume that her anger at her husband is stoking the flames of rebellion, but it was a sharp turn, totally unexpected (and not well explained) change in her behavior.

When Dad comes home, HIS actions also enter the realm of the unbelievable. (*No spoiler here).

“Wildlife” was a good effort and Dano, himself, said, in an interview, that doing “a period piece” on a limited budget was quite the challenge. There is much to admire in his directorial effort, (if not in the screenplay itself.) Dano referenced asking Owen Moverman (“The Messenger“) for tips as he set out to direct for the first time. Maybe ask someone else to write a more coherent script next time? Because the shots of Montana are truly beautiful and the actors certainly do everything they can with such unrealistic story arcs.