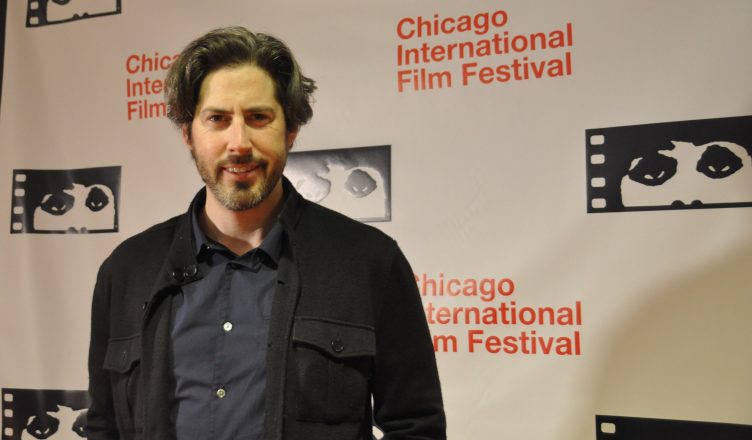 Director Jason Reitman (“Up in the Air”) at the screening of “The Front Runner” in Chicago on October 21, 2018. (Photo by Connie Wilson).

“The Front Runner,” starring Hugh Jackman and directed by Jason Reitner, was the favorite film I saw this past 54th Chicago International Film Festival. It reminded me of “The Candidate” directed by Michael Ritchie and starring Robert Redford, which I reviewed 46 years ago (1972). In fact, I still have a button that says, “All the Way with Bill McKay” from the Showcase Cinemas in Milan, a gimmick given out to those who attended the film. Reitman acknowledged, in the Q&A following the film, that “’The Candidate’ was our North Star” during shooting of this film about the 1988 presidential race of Colorado candidate Gary Hart. “The Front Runner”  also reminds of Beau Williman’s “Ides of March” with Ryan Gosling.

Hugh Jackman plays Gary Hart, the candidate, and the film follows the rise and fall of Senator Hart, who was considered the overwhelming front runner for the 1988 Democratic presidential nomination until the story of an extramarital relationship aboard a yacht called “Monkey Business” doomed his campaign, causing him to drop out. I was immediately reminded of how dangerous “front runner” status can be. I thought back to the Howard Dean campaign and the “sleepless summer” of 2004, which I covered for www.blogforiowa.com. [Each candidate, Hart and Dean, shot himself in his own foot, so to speak, although Dean’s “scream heard ‘round the world” was replayed constantly in a never-ending loop, discrediting that former “front runner.”]

The movie, which runs 113 minute and opens wide November 21st, considers many aspects of the disclosure of Hart’s dalliance with a beautiful blonde (Donna Rice). Although the event happened 30 years ago, it is timely today. As Chicago International Film Festival Artistic Director Mimi Plauche said, onstage, “This is about 4 ‘P’s’: Power, Politics, Privacy and the Presidency.” She asked Director Jason Reitman (“Up in the Air”) how he managed to focus the film, since it contained many topics?

Asked how he came to make this film, since he was only 10 years old the year that Hart ran for President (1988), Reitman said he had heard about the race on a podcast and became fascinated with it. Plus, he said, he always looks for an ending, and this story had one.

Reitman also said, “I’ve always wanted to work with Hugh Jackman.  Ever since I saw him in “Logan,” for which I think he should have been Oscar-nominated, I’ve wanted to work with him.  Jackman is the most decent human being I’ve ever worked with on a set.  Every day, so that he could get to meet more of the cast and crew, he’d bring scratcher tickets and personally hand them to everybody.  He had a huge spiral notebook of research on Hart.”

Talking about film, in general, Reitman said, “If the theory of film Is that it is purposely messy, what is relevant?  What is important?  We were going to throw a lot at you in this film. It was not improvisation. It was controlled madness.”

Of the opening scene, [which sees Hart conceding to Walter Mondale at the 1984 convention], Reitman said, “That was a two and one-half minute shot with a lot happening. Your ears tell you where to look. Steve Morrow wired everybody, so you had lots of people talking.  Sometimes, we’d hand someone a magazine from that year and say, ‘Read this to your seat mate and explain it to him.’ That’s your dialogue.”

Acknowledging the contributions of his Director of Photography, Eric Steelberg, Reitman said, “I’ve worked with Eric since we were 15. We do photo-boarding. We take stand-ins and go through every shot and frame on the actual location and shoot pictures. It’s like storyboarding, only with real people and lens directions. When we’re done, you can flip through the book of pictures and see the movie-to-be.”

To what extent were people instructed on how to behave?

“Our North Star throughout was Michael Ritchie’s ‘The Candidate’ (Robert Redford, 1972). We established real rooms where people were doing their jobs.  All the extras were assigned in advance. We gave them photos of reporters on a bus in the eighties to show them how it really was. We used real film from campaigns. We wanted it to feel as live and messy as possible. When we saw film of James Carville eating popcorn out of a coffee filter because they’d run out of paper plates, we said, ‘We’re using that.’ From a technical point of view, this is the most obsessive movie I’ve ever made.’”

“My producing partner since ‘Up in the Air’ has been Helen Esterbrook.  We both  voice our respective points-of-view.  It was odd that people alive then didn’t remember Donna Rice at all and talked about her as though she were an object.  Even in the last few years, there’s been a shift in how we view Monica Lewinsky and that situation.  We made an early decision on how to portray Donna (Rice). Halfway through the movie you meet Donna (Sara Paxton) and she’s alone.  Sara kind of just took the weight of the whole movie on her shoulders in her scene and did it with great poise.” Reitman said that, in meeting all the real participants, he “felt oddly more responsible to Andrea Hart,” the college-aged daughter, but also remarked “I felt a responsibility to be decent to all the characters.”

It may be this decency on Reitman’s part that leaves the audience with alternative versions of Hart’s story involving Donna Rice. In one, Ms. Rice flew up to spend the weekend with Hart in his Washington, D.C., town house. In the other, Ms. Rice and another couple  entered his town house but departed via a back exit after about an hour. A major plot point on Hart’s part is that the reporters staking out his town house didn’t cover the back door.  The seasoned campaign manager Bill Dixon (J.K. Simmons, Oscar winner for “Whiplash”) reminds the appalled candidate, “It’s not ’72. It’s not even ’82,” noting how public perceptions had changed. That remark is certainly timely today, in Trump’s America.

Reitman told a true story he had heard from Joe Trippi, the legendary campaign manager who took Howard Dean to front-runner status early in the presidential race of 2004 and who recently master-minded the Alabama campaign of Democratic Senator Doug Jones. [Jones became the first Democrat to be elected to the Senate from Alabama since 1997.] Trippi confirmed that Andrea Hart, Gary’s daughter, had to be sneaked out of their Colorado house while lying flat on the back seat of a car with a blanket concealing her presence there. To make it even more convincing, someone sat on her legs and waved at the throng of reporters.

Noting that the primary/caucus system was established in the mid-seventies, to take the selection of a presidential candidate out of the hands of power brokers in smokey back rooms, it then became the press’ duty to report on the candidates. Reitman said, “The responsibility fell on the shoulders of journalists after the backroom broker system died.”

Asked “Has American gotten the leader it deserves?”, Reitman admitted that he’s not a fan of the current occupant of the Oval Office, saying, “It just kills me every day, but I’m a Canadian. I have an escape plan!” (Laughter).

The comment is made in the film, “Someone will dredge up something you said 15 years ago and pretend it encapsulates your entire life.” In light of the recent Kavanaugh hearings, this rang very true. We also learn that 64% of the public polled felt the stalking of Hart by the Miami Herald was irrelevant and unseemly.

Hart felt, “I care about the sanctity of the process, whether you do or do not!” He did not feel that the press had the right to report on his private life (“Should I sacrifice my privacy?”) Hart also said, “Judgment, like character, needs to be measured in the full context of a career.” And, later, “Politics is on the verge of becoming another form of sport. I’m an idealist and I want to serve my country.” One could point to JFK, Jr.’s ill-fated magazine “George,” which was published from 1995 to 2001 as embodying this idea that politicians were, in essence, becoming celebrities even all those years ago.

A different point-of-view is articulated by campaign worker Ann Devroy (Ari Graynor of “I’m Dying Up Here” on Showtime). Speaking to a female journalist, she says, “He (Hart) is a man with power and opportunity.  As our potential next president and as a journalist, you ought to care.”

Asked about one particular campaign scene, where Candidate Hart ends up at a logging site and must throw an axe at a bull’s eye, Reitman said that the cast and crew had a pool on how many takes it would require for Jackman to hit the bull’s eye. The faux candidate stepped up and hit a bull’s eye with his first throw of the axe. “Then he did the wolverine pose,” said the director, adding, “It took about 8 more takes because the rest of the cast didn’t get it down.”  In the film, a spectator says, “This is a first.  He might just actually throw away his campaign.”

Reitman acknowledged that, “You look for stories that can be a prism: public life versus private life” and this is definitely a relevant and interesting one from 30 years ago.  The real Gary Hart is now 81 and has been married to his wife, Lee (portrayed by Vera Farmiga) since 1958.