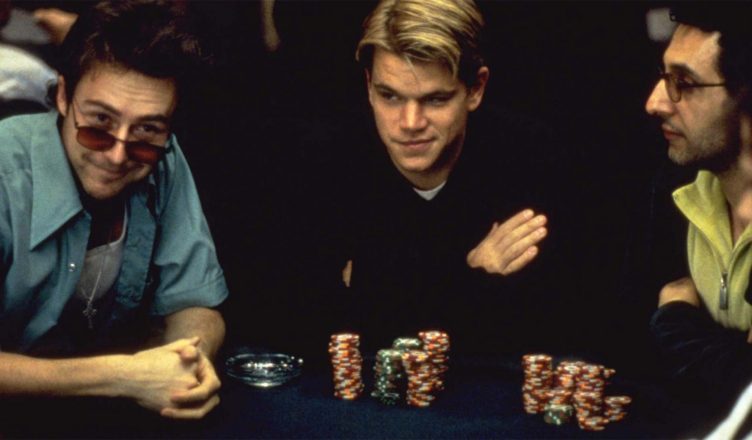 Casino gambling certainly has a glamorous image attached to it. Visiting a casino used to be the distraction of the rich and famous, with vast sums of money gambled in glamorous locations not open to the riff raff. Hollywood capitalized on this image, painting characters like James Bond as living a hard and fast lifestyle, gambling, drinking, seducing women and saving the world, all within a one and a half hour movie.

Things have changed considerably however, with poker returning to its ‘every-man’ routes. Hollywood’s renditions of poker have given way to include underdog stories, crime thrillers and all out poker films that focus on the characters. In amongst these niche poker movies, there is actually some excellent simulated gameplay that would of course make for an excellent game of poker if it was actually applied to real world games. The following movies have definitely had an effect on the popularity of poker and the way it is played, the online casino industry is thriving, with a lot of activity centralizing sugarhouse sports betting.

Knowing your hand and having a fairly good idea of what everyone else could have is a poker strategy that many fantasize about. It’s a great skill being able to use math and play the odds to theorize the probability of the next card to be played.  Casino Royale was the film to bring Bond firmly into the 21st century, with Daniel Craig chosen to portray the secret agent in a much grittier setting, whilst still paying homage to the original Fleming stories. One of the plot devices in the movie is a high-stakes poker game set up against the villain Le Chiffre, in a bid to cut off his funding. The final scenes of the game see Le Chiffre holding a full house with aces and sixes, enough to win any hand of poker, but James is quick to calculate the odds of something better, eventually taking the pot with a straight flush.

Rounders is probably the most popular poker movie of all time, becoming a cult classic for many enthusiasts. A young Matt Damon is a talented graduate who ends up in debt after losing out in a game of poker and turns away from the game to avoid losing again. He gets dragged back into the world of underground poker however, facing a terrifying Russian mob boss (played by John Malkovich) in a winner takes all game. Although he is losing chips, the protagonist uses a key poker strategy to gain the upper hand; looking for a tell. It turns out that the mobster is using both a betting strategy and his body language gives away when he has a good or a bad hand. With a bit of courage, the mobster loses his cool and our hero walks away with the money and his life.

The Cincinnati Kid set the precedent for the gambling movie. Action hero Steve McQueen plays the eponymous poker player, who is put in a big game with some unsavoury players. The final hand however is one of the best pieces of poker cinematography however. The game ends up with two players, the Kid and his rival, Howard ‘The Man’ Lacey facing off after the Kid confronts Howard for cheating. Howard’s hand is excellent, with a queen-high straight flush, but the Kid betters him with Aces full of tens. The key part of the scene is the build-up and tension used by the Kid, something that makes the gameplay extremely life-like.