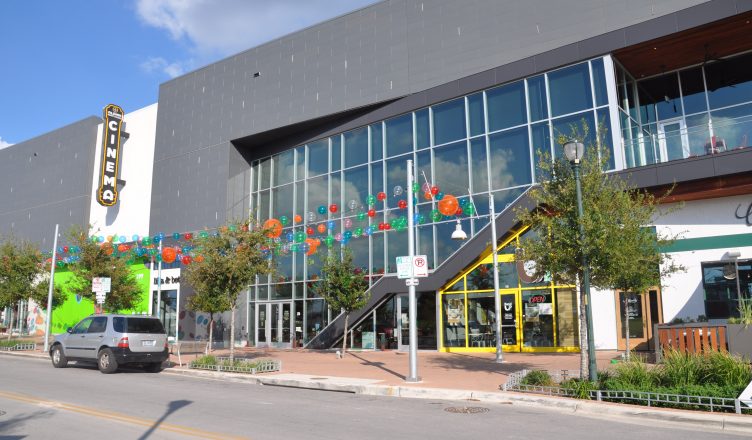 The Austin Revolution Film Festival (Sept. 17-22) is in its 3rd day, with trips planned to a local high school and then on to Austin’s Salt Lick Barbecue. I am here both as Press and, originally, as contestant (screenplay).  We were all told there were over 10,000 entries. Since I’ve spent a fair amount of time in Austin (SXSW, etc.), I’ve been to Salt Lick before and stayed home.

At least, I WAS here as a contestant for what might have been my 37th screenplay win since March, until shortly after a “mixer” that was held on Wednesday, September 12th, 10 days before this  Festival ends. I’m not sure what happened, but I beat my own record for being dropped from something (disenrolled from?) , previously held by my enrollment in the Chicago Screenwriting Class. That time, I left class early to back up the woman who kept missing her el train to the suburbs because the instructor rambled on ad nauseum. (He was not amused.) Not being in his class worked out well for me, as I took the class online, one-on-one with the founder of the Chicago Screenwriting School, Dan Decker, whose adaptation of my short story “Confessions of an Apotemnophile” is also a Finalist here. Or was. (I think Dan’s work also got the hook, but I’m not positive, as his was a short screenplay under 30 pages.) And we became good friends for life. 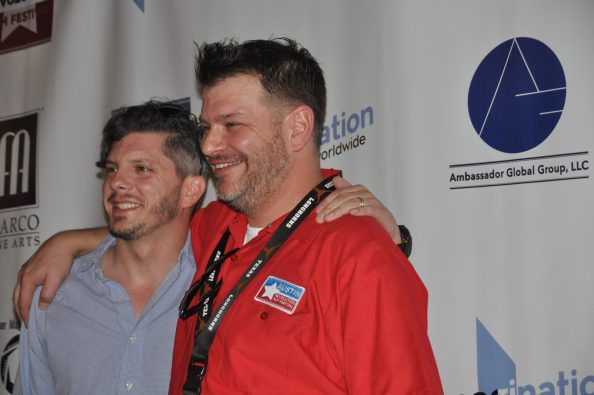 Austin Revolution Film Festival founder James Christopher and unidentified contestant (unless he was also ejected early or is a mere spectator). (Photo by Connie Wilson)

The day AFTER the September 12th mixer I got a short e-mail (“Dear Con” letter?) telling me my screenplay was toast.

I’m a good loser, but what about the poor kid who flew all the way from Australia (Henry Young with “Animal”)? Did he fly 17 hours only to be told he was no longer in the competition? As a polite suggestion, I’d like to say that if a film or screenplay is designated a Finalist (as I was on June 29th), that should mean that he/she or it goes all the way to the END before he/she or it finds out they have lost. Otherwise, the individual who has undertaken time and financial obligations to be present may come all the way to Texas  and end up being a fifth wheel for 10 days, (as I am.)

Fortunately, I am here writing this for all of you, so you will know how some of these things work. (*Note: In San Antonio and the Windy City Film Festival, that is NOT how it works. You lose on the final night like 99% of the rest of the people. Seems only sporting.) 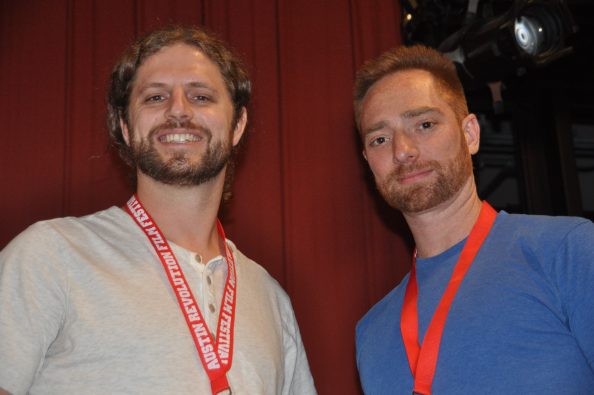 Landry Gideon (left) and Andrew Miller (right). If this is NOT Andrew Miller, apologies all around. (Then he will be identified as the Landry friend who graduated from Washington High School in Cedar Rapids, Iowa, which I know is correct.) [Photo by Connie Wilson]

I  attended the mixer. I spent most of the time speaking with Landry Gideon, founder of TriaDATX Productions.

Landry asked about my screenplay (he says I should watch television’s “Castle Rock”).

I wondered as I read the short e-mail telling me my screenplay was not going to win Competition #38, “Was it something I said?”

I spoke with Landry about his documentary entitled “One Act.” I have to confess that, at the time, it sounded dubious. It was a look at Texas high school drama competitions.

I asked when it was showing (Landry is nothing if not charismatic.) He said, “Saturday at 10:30 a.m.”

This was bad news for someone who  missed the Sistine Chapel because it closed at noon that day.

“Is your wife coming?”( Landry had shared that his wife is expecting a child and was on the fence about attending.) They recently purchased a house in Pluegerville and Landry does sound for film, having graduated from film school with a grand total of one class in sound (“I learned on the job“). When I asked if his wife was supportive of his desire to be a filmmaker, he said, “Absolutely!”

I was pleasantly surprised to learn that Landry’s 73-minute documentary entitled “One Act” was NOT being shown at 10:30 a.m., but was going to close the second night’s slate of films (films were shown from roughly 6:30 until 10 or 10:30 p.m.; most were shorts). “One Act”  was GREAT, and I told Landry that he ought to enter it in the Chicago International Film Festival, where it would stand a very good chance of admission. (And, having covered CIFF for 17 years, I would know.)

Landry’s film explored the world of competitive high school drama and, in that sense, reminded me a bit of television’s “Glee.” The schools featured were Salada High School, Rogers High School, Hempstead High School, Randall High School, and Barbers Hill High School and their respective drama teachers and students. The students are to perform a one-act play, competing against one another at the Zone, Area, Regional levels, until they make it to state. I asked the young man with Landry (I hope it was his D.P., Andrew Miller) if they had shot a lot of film and he acknowledged that they had.

The drama teachers are a hoot.  One of them, commenting on his desire to win, said, “I want to beat you up and then beat your sister.” (I was reminded of Hayden Fry, longtime coach at the University of Iowa, and his Texas expressions like “high porch picnic.”) It is quite obvious that the students and the teachers have bonded and become close, and the selection of a one-act play was an interesting process. Some are on a list that is “approved” for one and all (Shakespeare, of course, and others) and then came the creativity on the part of the drama teachers. One teacher admitted that she liked using war plays, “because these boys are about the same age their grandfathers were” when they fought in Viet Nam. Her choice was a play called “Boys of Winter.” I was amazed that there were so many male members of the troupe who were uber masculine in presentation and appearance. It is sometimes difficult, at the high school level, to coax young athletes into pursuits like drama, band or chorus. Not so in these schools. The various rituals the class observed were also interesting and, sometimes, amusing.

The African American drama teacher at Rogers High School had cleverly and creatively selected a German one-act play translated into English, entitled “Kholstomer: The Story of a Horse.” Presenting to the class that they are going to have to act like horses was both funny and engrossing. The class  made a field trip to a farm to learn how to trot and cantor properly. Another school selected “Black Angel,” which featured a dramatic crucifixion and murder scene. And then there was “Midsummer Night’s Dream,” which went over about as well as you’d expect it to in Texas. (Just like “American Idol,” the selection of a song/play is paramount.)

One young girl declared the Texas One Act competition to be “the largest interscholastic competition in the world.” Then she paused and said, “Is it in the  world or the country?” She laughingly decided “world” decided better, whether it was right or not. She also later confessed to being in the rest room when one particular drama teacher gave a rousing speech to the troops. She was so natural and funny that you wanted to hear more from her.

The music in “One Act” by Will Patterson provided heart-pounding suspense and tension in the scenes leading up to the announcement of the various winners at each level of competition. Landry and I had talked about his desire to bring in Patterson who was described by the D.P. as “The Man.” If sound is your profession, you want good sound, and “One Act” has that. And good “acting” by both students and teachers.

It’s a real gem, and I hope Landry enters it in the CIFF (Chicago International Film Festival) because it definitely would make a good addition to that internationally known film festival, and I think it belongs there. 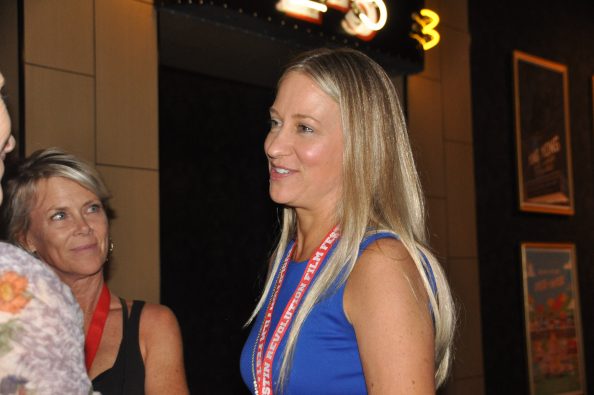 Lisa Belcher, who is one of the two guiding lights of the Austin Revolution Film Festival along with James Christopher, co-wrote, acted and directed a short entitled “Guest of Honor.” (Her co-star, Luke Hassel, was her co-writer). Struck by tragedy, a married couple goes ahead with their anniversary party, when an unusual guest arrives. (For more details, see WeeklyWilson.com).

Lisa heads up Jump Rock Pictures and works closely  with Christian Olteanu, her crew chief. She is a bundle of energy and gives a nicely restrained performance as a grieving mother. The sound was professionally one in L.A. and the sets are equally professional. Unlike the 73-minute “One Act,” however, this was a short.

For me, this short that dealt with an old man’s encroaching dementia and his fear of losing his identity if he is forced into retirement was quite good. Andy Kasteler wrote and directed it. The “boss” in the piece is also the older man’s son, and the older gentleman is shown whitewashing trees (probably a form of safeguarding an orchard against inclement weather, I’m thinking). He is losing it and whitewashes a telephone pole, at one point, causing his son to fire him and tell him he needs to stop working.

The younger man’s father obviously does not want to stop working, as it represents his identity. It was an anguished examination of the horrors of growing old, seen from the vantage point of both the older man and his younger son. 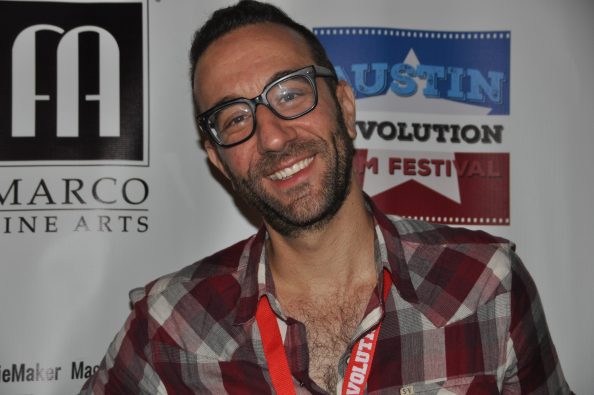 Dennis Cahlo of New York City. Dennis wrote, directed & starred in “Death & Disco Fries.” He also has a podcast and we may chat about movies on it soon. (Photo by Connie Wilson)

Other shorts I enjoyed this evening were “Death & Disco Fries“ (complete synopsis on WeeklyWilson),“Clementine”, and “Jessie’s Girl.” The feature film “A Chance of Snow”, directed by Festival organizer James Christopher (his 13th film in 15 years) closed out the first night.

(For write-ups on all of the films shown the first 2 nights of the Austin Revolution Film Festival, check www.WeeklyWilson.com).