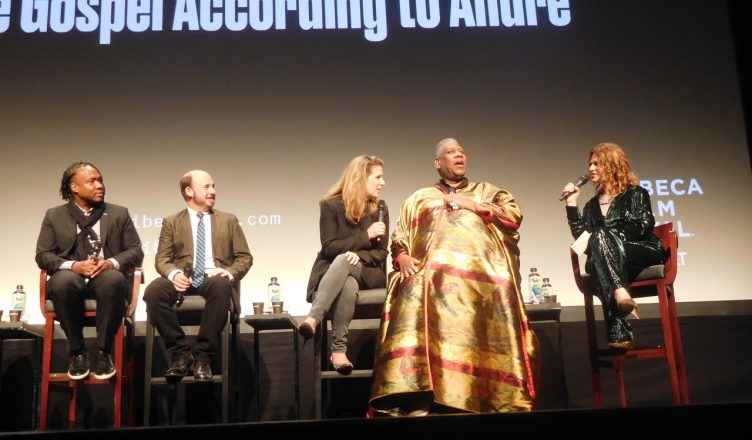 The life of fashion icon André Leon Talley is celebrated in Kate Novack’s documentary The Gospel According to André, which premiered Wednesday night at the Tribeca Film Festival. Novack, who directed “The First Monday in May” and “Page One: Inside The New York Times,” had the full cooperation of her charismatic subject. Her  documentary beautifully portrays his emotional complexity and intelligence, along with his sense of humor and childlike awe at everything he encounters in both nature and fashion.

Talley’s place in the fashion pantheon is secure; he has been a fixture in the front rows of fashion shows for more than four decades and defined the boundaries of style for Vogue magazine. Novack of course focuses on that but the archival footage is equally fascinating.

Novack’s intimate portrait takes a look back at Talley’s roots growing up in the segregated Jim Crow South. At 19 he received a scholarship to Brown University where he studied French culture. At school he forged life-long friendships with other artistic and creative students who shared his fashion sensibilities, and he finally began to feel free and see the direction his career would take.

The documentary focuses on Talley’s most formative relationship, which was with his beloved grandmother. She influenced him on matters of style and elegance and gave him the unconditional love he never received from his mainly missing mother. Viewers will also see in the documentary the influence of the black church, which he and his grandmother attended every Sunday, and where everyone dressed in their best and sparked his interest and passion in fashion.

In his career, Talley went on to break barriers at publications like Women’s Wear Daily, W and Vogue. The doc shows his close relationship with Diana Vreeland, who was to become his mentor. She was his teacher but he also read to her when she was sick and bed ridden and could no longer leave her house. It also features commentary from fashion luminaries, including Anna Wintour, Marc Jacobs, Valentino and Tom Ford,

Following the premiere the audience was treated to a lively panel with Talley, moderated by Sandra Bernhard. Sharing the stage were producers Andrew Rossi, Josh Braun, Roger Ross Williams, along with the director.

Talley, who came out in a vibrant red and gold caftan, received a rapturous reception from the packed house and declared himself “overwhelmed” by the audience response to the film.

“Every day I have to create my own miracles,” Talley told the audience. “And one of the miracles is I was sitting in the car waiting for the line to come into the theater, and I just love the line because it’s full of people black, white, straight, young, old, gay, straight, lesbian, everybody’s here…”

“Are there lesbians here?” cracked Bernhard.

From the audience someone asked about Talley’s caftans and how they became part of his signature wardrobe?

“The caftans, they just came about organically. I think Valentino designed some of the most beautiful caftans. He did one of the first ones. And it just became a very fluent thing for me to wear. Also, it’s very indigenous to what the men in North Africa wear.”

Did he design his caftans?

“I collaborate with the designers to get the caftan going. This is designed by Dapper Dan (the tailor is on 125th Street). Tom Ford has done a lot of my caftans and I have the most beautiful ones from Valentino couture. When he closed and said goodbye to his 40-year career, he had a great party for four days in Rome and he did three couture caftans on me. I flew to Rome and he fitted me just for the party.”

Would he start his own line?

What was the thread that kept him focused?

“Faith, faith, my faith,” said Talley. “My religion. My foundation in the church. My ministers. Every reverend that you see,” he said. “That little small church on the country road in Durham. I grew up in a household of faith and love and that was the standard. I’ve had low valleys and high peaks, but it’s the foundation of faith that gets me through.”

What he would have done differently in his life?