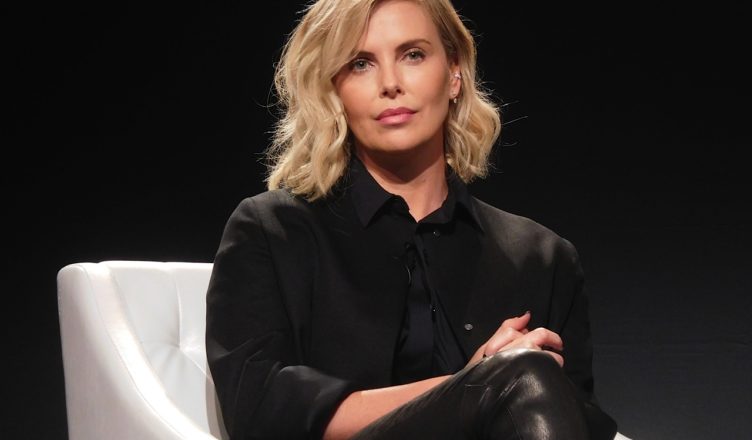 “I built a whole career on flawed and fucked up characters,” Charlize Theron told journalists during a panel for the new Netflix series Girlboss, which she executive produced and which premieres April 21.

If anyone knows how to play complicated, badass women on screen it’s Theron, who has perfected these roles since her Academy-Award winning performance in “Monster” (2003), later in “Young Adult” (2011) and more recently famously for  “Mad Max: Fury Road” (2015).

Girlboss stars Britt Robertson in a role loosely based on the real-life story of Sophia Amoruso, the founder of the online fashion brand Nasty Gal, who made a fortune selling vintage clothes on eBay. Amoruso spun her story into a New York Times best-selling book and also serves as a consultant on the show.

Theron has partnered as executive producer with “Pitch Perfect” screenwriter Kay Cannon who has a list of successful television shows to her credit.

Participating at the Netflix press event, along with Cannon and Theron, were Amoruso, Robertson and director Christian Ditter.

The center of attention of course was Theron, who peppered her lively and passionate comments with expletives and was dressed all in black leather.

Cannon explained how she came to be the showrunner for Girlboss, as she searched for her next project following her successful comedy series “New Girl.” “I like to base things off of real life stories.” She asked her agents to send her books, articles, anything like that. “And sure enough,” she said. “ I would get sent a lot of things I really wasn’t into and then Charlize came to me with the book #girl boss and I remember that I was had watched all the Oscar screeners that year and it felt like every story was about a flawed man, which is totally fine. But I was really thirsty, starving to create something that was about a woman, a woman’s story.’

When an agent brought her Sophia’s book she said she felt, “absolutely, I can’t wait to do it. I was really surprised by the fact that it wasn’t really her life story, that it was these little chapters that I found very amusing about young adulthood,” she said. “The young girl in me was kind of envious and wished that she had something like that when she was in her 20’s.”

For Theron, Girlboss was a continuation of her ongoing goal to produce and star in movies or television shows that focused on complicated, difficult women. After the two women got the rights for Sophia’s book, they pitched it first to another place before Netflix with less than promising results.

“We went and pitched this when we got the rights. We went to one other place and I won’t name the place but to give you an example we sat in a room,” Theron said, “And the feedback we got was absolutely shocking. Mostly men in the room.”

“There was this real sense when we walked out of really truly understanding that if you didn’t find the right home for this project it would literally just kind of disappear,” she said. “It would become nothing. It would become something very mediocre and I remember standing at the elevator and looking at Kay, and, Kay is just incredible and so optimistic and I’m just this fucking depressed bitch, you know? She’s like ‘I think’ — — and I was like we’re not doing that. We’re not doing that.”

Cannon noted of the experience, “I remember being like, Charlize, get in the elevator, they can still hear us.”

Cannon praised Netflix for seeing the value of the show, particularly at this time. “I will straight up say, it really sticks with me. Netflix is the most perfect place to tell the proper story, about a flawed wonderful character.”

And Netflix didn’t ask for a lot of changes as compared to the other place, that told them, Cannon said, “You can’t call it Girlboss, and you need to make it more for men, and it was kind of like well that is what the show is.” She added, “ It’s almost like a joke, they have their own business numbers and the things they realize and things that have girl in the title don’t seem to evidently do well. Although I would argue that Girlboss would go against that. We pitched it to all the major networks and no one bought it.”

Then there was the fact that the central character was possibly unlikable said Theron.

“There’s always this worry with characters like this – and I’ve seen and heard this many times in my career – where you hear that age old tale that people are not going to like her and find her too abrasive and you have to make sure the audience likes her. And I wonder how many times Robert DeNiro heard that when he was doing Taxi Driver. How many times did Jack Nicholson hear that when he was doing The Shining? And there’s this consistent fight that identify been a part of that is very much in trying to explain that audiences are very much connecting with the truth of what women are.”

“And our complexities and how layered we are and how beautifully fucked up we are. Not just women relate to that. People relate to that and society relates to that and it is when we show women like that in that very truthful manner that I think people relate to a story more. The days of living in the Madonna/whore complex, that’s gone. We’re not doing that anymore,” said Theron. “We’re not going to be great hookers and great moms. We mess up. Me sometimes have foul mouths even though I don’t,” she said. “Some girls do.”

Theron gushed over the show’s star, sort of. “And we have an actress like Britt I mean, it’s like — we have a gold mine at our hands so you want to explore all of that stuff because this girl is stupidly talented. I mean it’s like I fucking hate her.”

“She says that to me too often, ‘I fucking hate you.’ It’s starting to sound mean,” joked Robertson.

“I’m really inspired by this younger generation,” added Theron. “ I’m really inspired by Britt. I remember when I started in this industry a lot of us young actresses at that time were girlfriends or wife or trophy wife and I felt I had to try to create — to make wine out of water and you’re kind of at the mercy of a writer really to bring that. And I’ve always been very clear that we are all kind of at the mercy of the opportunities handed to us and it wasn’t until good opportunities were given to me that I was ready for them. By I feel like this generation is changing that I’m inspired to in some way be a part of that, whether that means finding that material and developing it and trying to get it in television and movies. There’s storytelling available to us right now where women really are at the center of it.”

One thought on “Charlize Theron Brings Another Flawed, Complicated Anti-Heroine to the Screen in Netflix’s ‘Girlboss’”