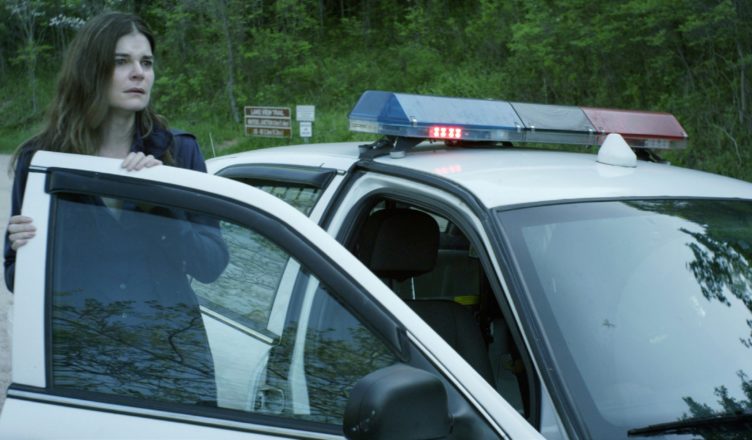 In “Claire in Motion,” Betsy Brandt portrays Claire Hunger, the college professor wife of Professor Paul Hunger, who teaches ornithology at Ohio University. Paul has been taking off and walking into the woods on “survivalist” missions that seem risky, at best, where he lives off the land and disappears for 4 or 5 days at a time. When the film opens, he is leaving on one such adventure and is saying good-bye to his sleeping wife.

She urges him to “be careful” and, after responding that he will “see you in a few days” he says, “You know me.” Discordant music is heard in the background as the film opens, which reminded me of a band or orchestra tuning up. (The original music was by Xander Duell, who was born Alexander McMahon and is the founding member of the 5-piece band Inouk).

Betsy Brandt is a fine actress, and the other performers match her intensity, scene for scene. The subsequent search for her missing husband which leads her to uncover a world of secrets, is a promising premise for a film. After all, “Gone Girl” took the idea of the missing wife and ran with it quite successfully, but “Gone Girl” had an innovative twist-y plot with that (hard-to-achieve) surprise ending.

In this film, three weeks after Claire’s husband Paul (Chris Beetem, “Black Hawk Down”) has disappeared, others have given up on the search, but Claire has not. Claire is still learning new things about her husband, a man she thought she knew well. There is a graduate student in art, Allison Lorn (Anna Margaret Hollyman) who may or may not have had an affair with the professor.

For sure, Allison shocks wife Claire with the existence of art work(s) that her now-missing husband was working on when he disappeared. To say Paul was a “closet artiste” is putting it mildly. [Judging from the artwork used in the film to represent Paul’s efforts (which resembled my Christmas tree lights, inextricably bound up in a giant mess adorned with feathers and rope) keeping his art in the closet was probably a good idea].

But keeping her attention focused elsewhere and not being present “in the now” for her spouse may have been Claire’s fatal flaw in what appeared to be a happy marriage. Several times we see the same clip of home movie film replayed, in which an obviously preoccupied Claire is asked to “look at me” by her husband, the cameraman. Claire responds, in annoyed fashion, “I’m looking at you.” Paul retorts, “No, you’re not. Not really.”

Co-writers/directors Lisa Robinson and Annie J. Howell said, “With this film, we were interested in telling a story about something that’s been lost—both physically and spiritually. It was intriguing to give Claire a life crisis that leads to a bigger mystery, one that unravels her perception of all she thought she knew to be true. We wanted this experience to be closely observed and to bring intimacy to every element of the film: the acting, the landscapes, and especially the camerawork (which is excellent, courtesy of Andreas Burgess).”

The writer/director team went on to say: “Claire’s quest to understand her shifting world after a crisis is a metaphor for more universal questions. How do we keep changing throughout our lives?…Can we ever really know anyone?   These were the ideas we explored through the writing and directing of Claire in Motion.”

I write fiction—both novels and short stories—and have for many decades. Writing a kick-ass ending, long or short, is hard. Every time you step up to the plate, you don’t hit a home run. Sometimes, you are grateful just to score a single or a double. You don’t want to have to bunt or—worse yet— to strike out. Ideally, you’ll be able to hit that story finale out of the park every single time.

Halfway through “Claire in Motion” I said to my spouse, “This is really good. I’m liking everything so far: the acting, the cinematography, the music, the setting, the plot. I just hope we’re not going to have one of those Sopranos/Nocturnal Animals moments at the end, where, story-wise, we’re left high and dry feeling a bit unsatisfied and wanting more.”

There’s enough good content in the first hour of this film to justify a thumbs up and pronounce it a triple (acting/cinematography/theme). I just hope the talented filmmakers keep swinging for the cheap seats.

Because movie-goers (or readers) always seem to crave a denouement that knocks their socks off (or, at least, ties things up neatly). Maybe that’s just what I’ve experienced, but, if you agree, keep this small reservation in mind when viewing “Claire in Motion.”