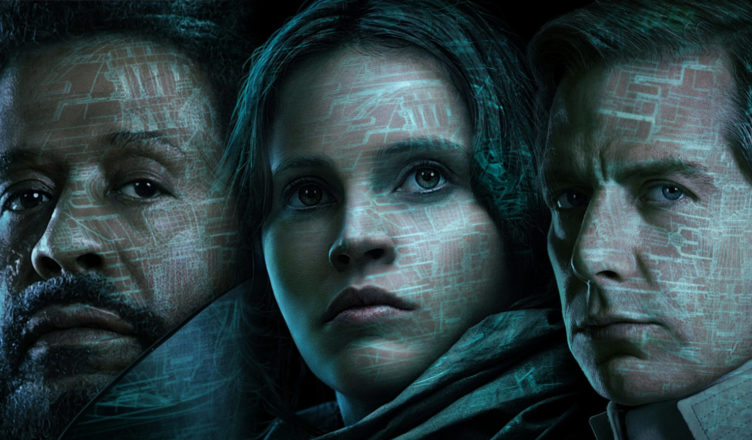 Synopsis: The Rebellion sets out for the Death Star plans while attempting to holding off the enemy.

Breaking News! Update! Spoiler! I’ll quickly preface that I’m not a hardcore Star Wars fan, but I have seen all the movies and a casual enough fan to understand majority of the Star Wars universe. Now, unless you are a hardcore fan or very familiar with Star Wars then you MUST at least see Star Wars: Episode IV – A New Hope before you see this movie or else you won’t like it. Often you will get prequels or sequels that tie-in with the movie before it, yet you can skip it and still get through and understand the newest release, but this won’t work with Rogue One. It is heavily tied into the set-up of A New Hope. Regular moviegoers who are planning to attend just to see what the hype is about, or even casual Star Wars fans, this isn’t a movie you will enjoy much. Nonetheless, it has now become a yearly December holiday tradition so here are the good and bad things about it:

This franchise is still alive and well and a lot of it has to do with the terrific visuals that wowed people back when the first Star Wars movie came out in the 1970’s. It’s 2016 and Star Wars is still a visual spectacle. The look of Rogue One is great. I really like that the film travels to multiple destinations and planets. It’s constantly moving to a new location, therefore keeping things visually interesting and different. There is the desert planet that’s dark and murky. There is the planet that resembles the Middle East with sand deserts and bazaars. Then there is the palm tree growing, green, scenic planet with aqua colored water. The sheer contrasts of the planets are descriptive of the range of locations the characters travel to.

K-2SO robot stole the show. He’s hilarious with fact laden commentary and one-liners, easily the most entertaining character in the movie. K-2SO aside, I liked the fact there weren’t many non-human characters grouped with the main characters. It would be tempting for Disney to throw in some cute robots or creatures to join in on Jyn’s (Felicity Jones) adventures.

Once the action starts rolling it’s some of the better battle scenes and collisions you’ll see in a Star Wars movie. The action is solid. There is some lightsaber use. It takes until late second half of the movie for it to really gets rolling and get to the startling conclusion.

From a Star Wars fan’s perspective: The entire set-up had a purpose and a conclusion that had the right justification. It’s true to the original Star Wars movies and doesn’t tinker with the original source material.

Darth Vader. How can’t it be a good thing to see him in a Star Wars movie. We don’t get a whole lot of him in Rogue One, but he’s in it enough and for the key moments.

I just couldn’t find myself caring and investing in the main characters, especially Jyn (Jones) and Cassian (Diego Luna) of the Rebellion crew. Jones is one of my favorite actresses, but in this movie she doesn’t have enough material (dialogue and action) of consequence to stand out. Unfortunately Jones is far less significant than Daisy Ridley was in The Force Awakens. Diego Luna is just boring to watch. I couldn’t get myself to be any interested in his dull character. It’s not a good thing when your two leads are making me doze off and go into a ten minute nap. The take away from the characters is that none of them, besides Vader, stand out. The parts aren’t written well, only Jyn has a legitimate backstory that’s elaborated on.

Speaking of dull and ten minute naps, I couldn’t help myself as the first half of the movie was boring and didn’t go anywhere (besides visits to some cool planets). The action gets going eventually, but it take a while to develop. The movie isn’t overly long, but at least fifteen minutes could have been trimmed.

I was a bit shocked with the ending. Didn’t think some things would turn out the way they did, especially in regards to the heavily featured characters. I can respect the route they ended up going.

The casual and non fan perspective:

I was confused by the way certain events transpired. I understand the end result of this events, but for non hardcore fans they will feel unattached to the majority of the characters in this movie. While they serve a purpose in the plot, they don’t in the big picture. The Rebellion’s pursuit of the Death Star doesn’t feel as impactful as it should be. The main characters are used as vessels and story movers instead of centerpieces that you can rally behind and invest into. If you do, you may end up being let down at the end.

I’ll compare Rogue One to being the interim coach to the other Star Wars films. You know, the sort of coach that comes in midseason after the main one was fired, and is brought in to give the team a spark and carry them through the remainder of the season, only to be fired and replaced with someone more qualified with a bigger name and talent. This movie is just that, an interim coach. There is no long-term payoff, it’s just a brief placeholder and backstory for the original Star Wars movies. In a way it feels kinda meaningless and cheap. You want to think this movie has some impact and significance, while it does in linking it to the future (or past), it’s a mere stand alone, one-off.

Rogue One is purely a fanboy movie. It’s heavily geared towards Star Wars diehards, who will most definitely enjoy this movie. On the other hand, casual fans will be left confused, unfulfilled and feeling like they have seen a very mediocre average movie, that’s how I felt.  It’s a tale of two audiences with a whole different meaning for each. There were frequent winks and nods to the past films that fans will pick up on immediately, while regular viewers will most likely miss or not care for. I can imagine hardcore fans leaving with an “aha” kinda reaction. I wanted to enjoy and like this movie, but I came out with a “meh” kinda reaction. Didn’t hate it, but didn’t love it either. Just average as it gets. To some the nostalgia of Star Wars will always carry over no matter how good the quality of the movie is. For others any sensations of nostalgia won’t resonate much anymore. Disney and LucasFilm should stick to telling the future and new Star Wars stories moving ahead and leave the prequel past in the past.

Now, to be fair I’ll be rating this movie from a fan’s perspective and from a casual viewers.

My understanding of the hardcore fans perspective – 8.5/10

2 thoughts on “Review: ‘Rogue One: A Star Wars Story’ Is An Average Story”