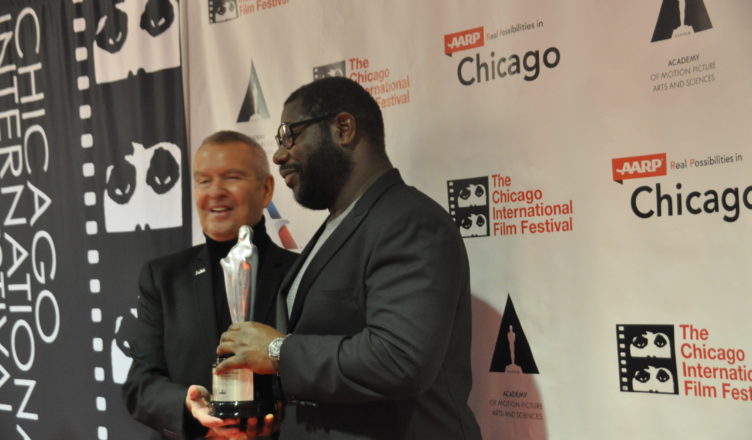 British director Steve McQueen came to Chicago to receive an award on the 20th anniversary of the Chicago International Film Festival’s Black Perspectives program. Jacqueline Najuma Stewart, professor of Cinema and Media Studies at the University of Chicago, interviewed him onstage.

Prior to Ms. Stewart’s questioning, McQueen spoke to us on the Red Carpet and answering a question about the climactic hanging scene in “12 Years A Slave,” his Best Picture Oscar winner of 2013, by saying that the long shot required patience and was a search for truth.

McQueen has directed 3 feature films, to date: “Hunger “(2008), “Shame (2011) and “12 Years A Slave” (2013). McQueen was asked about “Hunger,” which depicted the 1981 hunger strike in Britain by Irish Republican Army inmates, eleven (other sources say 10) of whom died. When asked about the impetus for this 2008 first feature, McQueen alluded to his youth in England, watching a picture of one of the inmates (Bobby Sands), with a number counting down beneath his picture on television each day. Only 12 at the time, McQueen would ask his mother why that man’s picture was onscreen with a number under  his mug shot which changed each day. From this, came an interest in the subject. “I realized that being in prison is a bit like when you’re young and your parents control everything. One of the few ways you have to protest is by not eating.To not eat is to be heard,” said McQueen.

McQueen added: “I was interested in the subject. The subject asked for its treatment to be linear, a feature film. This was the early eighties and terrorism and IRA tension was rife then. I did lots of research. I wanted to know the things in between the lines of the history books. History has so much to do with what is between the lines.” 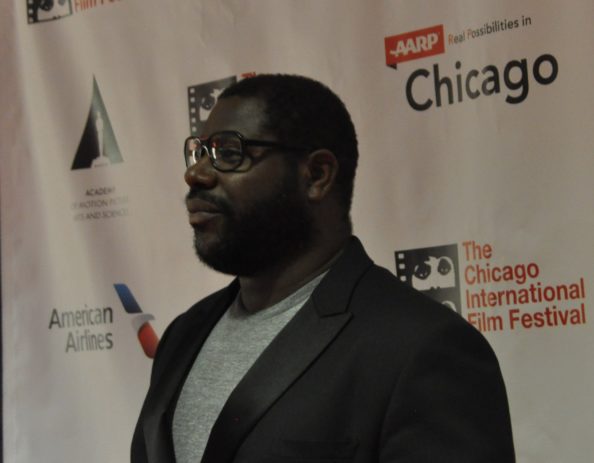 McQueen went on to talk about how smells can bring back a time, place or person (‘the smell of your grandmother’s house”) and said, “It’s not a visual thing.” In the film “Hunger,” which won a Gold Hugo at the Chicago Film Festival in 2008 and for which Michael Fassbender (now in all 3 of McQueen’s films) won a Silver Hugo that year, the inmates are shown protesting their imprisonment any way they can think of, including smearing their own feces on the walls of their prison cells.

This meant that every 5 days the authorities would make the prisoners change cells so that the walls could be washed, but the prison guards made the transfer from one cell to another in the most abusive way possible, stripping the men naked and mistreating them throughout. An extremely graphic clip from the film was shown; I could tell that most in the audience had not seen it previously (although I had, in 2008). “Hunger” was a very powerful piece of filmmaking, but not for the faint of heart.

Q: “How do you stage such a brutal scene?”

A: “This was not a normal film set in Belfast. Young people who grew up with the Troubles …it was put on them. That day (of shooting) was heavy. Apparently I shoot fast. I had to supervise using monitors, when I prefer being just behind my cameraman looking over his shoulder, but there wasn’t room for me in there. We did one take. The fact that I was the instigator of this violence was quite shocking. (He claims he broke out in a physical rash days later over the shooting of the film’s violent scenes.) There is only one cut…I’m not going to tell you where it is.  I had to walk off the set. Tears were in my eyes. I hadn’t had tears in my eyes like that since my father’s funeral.”

McQueen continued: “Art caused people to talk about it. Eleven men dead of starvation in British prison cells. (*Note: other sources put the number at 10 with Bobby Sands the leader of the rebellion).” 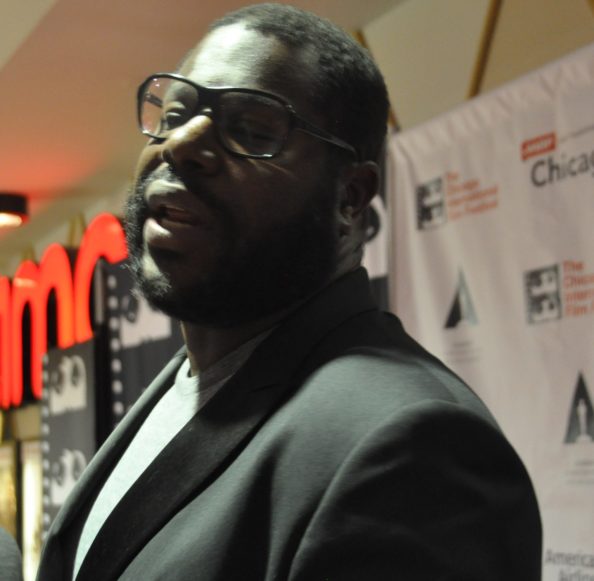 Q: Then you did the 2011 film “Shame” about sex addiction, shot in New York City, again with Michael Fassbender and Carrie Mulligan. There was lots of nudity in the film.

A: “Yes. If this movie had been made in 1951, Michael and Carol would have worn their pajamas.” McQueen recounted several conversations with psychiatrists that gave him an in-depth understanding of sex addiction and also mentioned the times during which it was shot. “Rupert Murdoch had just bugged everyone’s phones and it was the Tiger Woods era.”

Q: You seem to have a different rhythm and flow for each film. Do you plan that in advance?

A: “I always saw ‘Hunger’ as a stream: floating on your back and taking in the landscape and then there’s a waterfall and loss of gravity. Then you see the physicality of what is happening. After violence, it is exhausting and you go into a cascade, an avalanche of words. I saw ‘Hunger’ as having 3 parts: the introduction; the violence; and talk. But sound is also the most important thing in the film. Sound is so important in film. People need to lean in to listen. It gives them something to do.”

Q: Do you consider your films and your way of working conventional or unconventional?

Q: How do you know if it works?

McQueen is a film school dropout from NYU’s Tisch School and has been quoted more than once as saying the atmosphere there was too constrictive for him. He mentioned their refusal to allow him to throw a camera in the air. However, he said, “I went to a very good art school. Education was free in Britain then (15 years ago).”

A: “It was a good story. I’ve been coming to the U.S. since I was 7 years old. Just because my sister and I were born in the West Indies (Grenada and Trinidad) people try to separate us by nationality. It’s nonsense. These are stories, which are ours. There is a huge archive of black history—many stories. I wanted to tell this story of this man who was free and was kidnapped 97 years ago and who kept a diary of it. It was very interesting to me that this was a book that no one knew about, when everyone knows about ‘The Diary of Anne Frank’, which happened during World War II. By doing this story, I was advocating for a movie about the Underground Railroad and other projects. I consider it a bit of a Trojan horse because these are amazing narratives and now they are being made.”

Q: Do you have people telling you that they are experiencing slavery fatigue?

A: “Slavery fatigue? What is that?”

A: “When I read the book, I knew I wanted Chiwetel Ejiofor to play Solomon Northup because there’s something noble about him. You can put him in rags and he still looks like a prince. He’s such a genius. Also, Michael (Fassbender) is passionate and fearless. His part is such an interesting character. He is in love with Patsy (the slave girl played by Lupita Nyong’o) and he shouldn’t be. That’s a very difficult thing to do, but Michael went there.”

Q: How did you find Lupita Nyong’o?

A: “Lupita is like Scarlett O’Hara in this. It is amazing in that we searched high and low before finding her. She’d not yet graduated from college, but we saw her tape. She has a beautiful jaw line, beautiful lips. Her looks and her spirit and the combination of her looks and her spirit were outstanding. Michael (Fassbender) had rented a massive room with barely any furniture in New Orleans and I brought them together to practice some scenes and, after Michael worked with her and saw her passion and her intensity, he said, ‘I gotta’ get my shit together.’ (laughter) She’s got what she’s got and she’s taking it so far. She’s genius.”

Q: The furious jump cuts. Were they part of the initial rhythm or were they put in in post-production?

A: “I’ve worked with the same 3 people on 3 films: Joe Walker, my editor; Sean Bobbitt, Director of Photography; and Michael Fassbender. It’s like a band (I know I’d be Keith). You knew there was going to be a rhythm. You shoot it and then you see what happens. As long as you’ve got the angles, then you can play around with it.”

Q: What is your own personal connection with “12 Years A Slave?”

A: “The connection of this person wanting to go home. It was a bit like a horrible fairy tale, like ‘Alice in Wonderland.’ All of my films have a realization of blackness. I’m black.”

Q: If you were to make a movie set in Chicago, would you focus on Chicago politics or on crime?

A: “How come there aren’t more stories coming out of Chicago? It’s so rich that it’s crazy. Walk outside and open your eyes!”

(*Note: On September 27, 2016 a new project, Widows, was announced to be in development with a script penned by Gone Girl writer Gillian Flynn and McQueen attached to direct. Originally Jennifer Lawrence was approached for the lead role, but due to scheduling conflicts, she had to decline the project. Viola Davis will star in the film. The film is described as a heist thriller about four armed robbers who are killed in a failed heist attempt, only to have their widows step up to finish the job.) 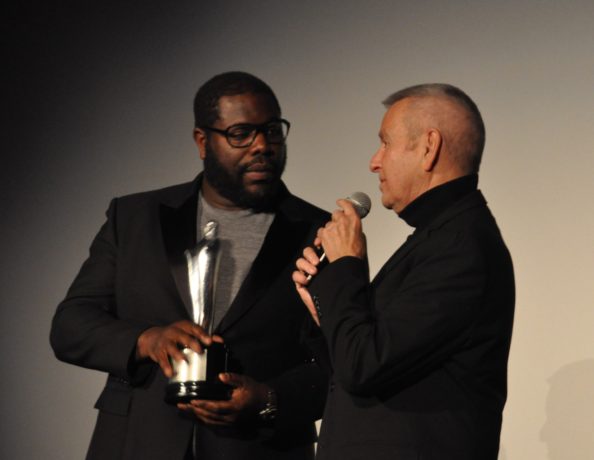 At this point, Cinema Chicago founder Michael Kutza came onstage to award McQueen his Black Perspectives Award for Artistic Achievement, noting that it is one inch taller than the Oscar McQueen collected in 2013 for “12 Years A Slave.”