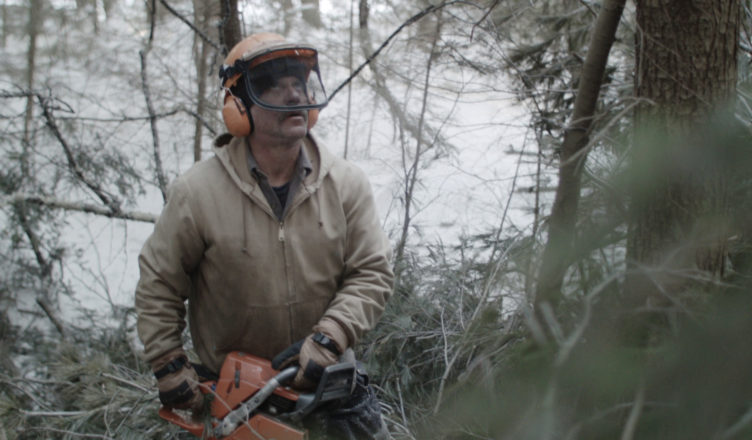 Bob Tarasuk is outstanding in the middle-aged actor’s first feature film leading role as a beleaguered logger in “Bob and the Trees”.  Tarasuk’s achingly authentic portrayal of a man teetering on the brink of complete surrender to a life of poverty and despair is as uncompromising as it is captivating.

First-time full-length film director and co-writer Diego Ongaro (he’s helmed several shorts, including one upon which this project is based) brings an inherent and intimate understanding to the simple yet often desolate life of those who live and work far from, and outside of, practically any devices of gentrification.  And they would have it no other way.

As Bob’s character is gradually and deliberately revealed to us we see that this is a man who by all indications invests more attention and affection into his livestock than he does his own wife, Polly (Polly MacIntyre in yet another remarkable performance which strikes nary a false note).  We discover that Polly is in the process of pursuing a kind of independence in this marriage by establishing her own identity apart from the auspices of her spouse, engaging in elliptical training and reading self-help books.  Bob scarcely seems to recognize this burgeoning transformation in his partner.  Nor does he appear to actually even care.

Bob and Polly have certainly weathered a few winters together.  I was struck by how little the life they’ve shared to this point is explored.  Perhaps Ongaro found that this extra dimension would have convoluted his story.  Or that it simply wasn’t all that interesting.  Still, I believe it would have lent a pressing layer of allure to an already compelling narrative.

There is a scene (courtesy of the spectacular cinematography teamwork of Chris Teague and Daniel Vecchione) toward the end of this movie where we are looking at a tree from the perspective of it’s base, gazing straight up through the winter ravaged branches to a bone-chilling sky.  It’s as if the tree is taunting.  Menacing.  Reminding Bob and anyone else who depends on it’s fruits for their very survival that it is in control here.  Always has been.  Always will be.  It is a quiet, almost meditative, moment.  And yet it is one that speaks volumes about the world in which year after punishingly exhausting year Bob has been engulfed.  And from which he so long ago resigned himself to the harsh truth that there is no real hope of escape.

And so, as the closing gangsta rap-fueled images of “Bob and the Trees” serve to poignantly reinforce, this man in the wilderness will fight on.

He must always fight on.

There is no alternative.