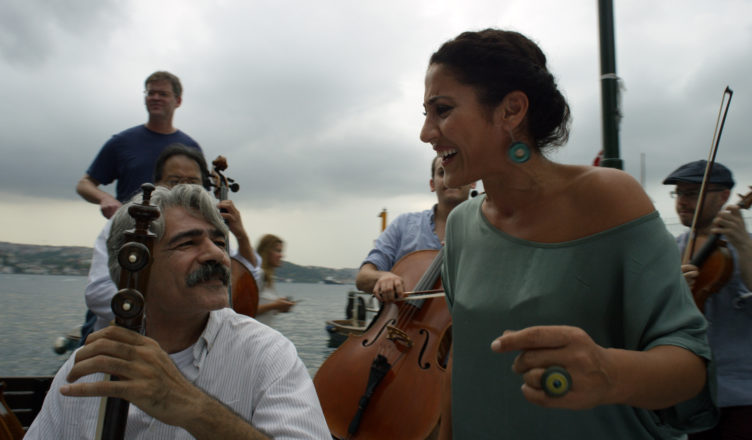 Now, I’m not from the East Coast, but this sounds like one heck of a summer festival. Apparently you can enjoy the the Newport (RI) Film Festival movies free of charge, but a donation is encouraged. One film that stands that will be screened that I’ve been hearing about is “Life, Animated”, about a boy unable to speak, but learns to communicate through Disney movies.

Summer is a great time for festivals, especially movie ones. Festivals like the Newport one are small gems. If you live in Rhode Island or nearby, I’d take advantage of such an event, or any other festivals that may be in the area you live. Here is more info on the festival:

Thursday, June 30
NORMAN LEAR: JUST ANOTHER VERSION OF YOU
Location: Queen Anne Square, Newport, RI
Arguably the most influential creator, writer, and producer in the history of television, Norman Lear brought primetime into step with the times. Using comedy and indelible characters, his legendary 1970s shows such as All In the Family, Maude, Good Times, and The Jefferson’s, boldly cracked open dialogue and shifted the national consciousness, injecting enlightened humanism into sociopolitical debates on race, class, creed, and feminism. NORMAN LEAR: JUST ANOTHER VERSION OF YOU is the definitive chronicle of Mr. Lear’s life, work, and achievements, but it is so much more than an arm’s-length, past-tense biopic; at 93, Mr. Lear is as vital and engaged as he ever was.

Thursday, July 21
LIFE, ANIMATED
Post-film conversation with Ron and Cornelia Suskind
Location:  Saint Michaels Country Day School, Newport, RI
From Academy Award® winning director Roger Ross Williams, LIFE, ANIMATED is the inspirational story of Owen Suskind, a young man who was unable to speak as a child until he and his family discovered a unique way to communicate by immersing themselves in the world of classic Disney animated films. This emotional coming-of-age story follows Owen as he graduates to adulthood and takes his first steps toward independence.

Sunday, July 24
STRAIGHT INTO THE STORM
Introduction by the band DEER TICK and Q&A with director William Miller
Location: Jane Pickens Theater, Newport, RI
In partnership with the legendary Newport Folk Festival™, STRAIGHT INTO A STORM is centered around DEER TICK’s 2015 10th anniversary run in New York City. A portrait of a hard-rocking band known for their substance-fueled live performances on their evolutionary journey to become one of the greatest cult rock bands of our time.

Thursday, July 28
JIM: THE JAMES FOLEY STORY
Q&A with director Brian Oakes
Location: The Redwood Library & Athenaeum, Newport, RI
On Thanksgiving Day 2012, American photojournalist James “Jim” Foley was kidnapped and went missing for two years before the infamous video of his public execution sent shockwaves and introduced much of the world to ISIS. JIM: THE JAMES FOLEY STORY, by close childhood friend Brian Oakes, tells the story of his life through intimate interviews with his family, friends and fellow journalists – while fellow hostages reveal never-before-heard details of his captivity with a chilling immediacy that builds suspense. Made with unparalleled access, the film is a harrowing chronicle of bravery, compassion and pain at the dawn of America’s war with ISIS.

Thursday, August 11
BETTING ON ZERO
Post-film conversation with Bill Ackman and director Ted Braun
Location: Ochre Court, Newport, RI
Allegations of corporate criminality and high-stakes Wall Street vendettas swirl throughout this riveting financial docu-thriller from Darfur Now writer-director, Ted Braun.  Controversial hedge fund titan Bill Ackman is on a crusade to expose global nutritional giant Herbalife as the largest pyramid scheme in history while Herbalife execs claim Ackman is a market manipulator out to bankrupt them and make a killing off his billion dollar short.  Caught in the crossfire are middle Americans forging their financial future, working class Latino’s seeking justice, and a business model affecting the lives of millions around the world.   Betting On Zero weaves deception, hubris, intrigue, and greed in a surprising, deeply emotional dive into the world of money, fraud and the American Dream.

Thursday, August 18
DON’T LOOK DOWN
Location: Rosecliff, Newport, RI
DON’T LOOK DOWN reveals the real story behind Richard Branson’s daring adventures in the 1980s and 1990s trying to break world records for flying in a hot air balloon. While Branson is a world famous name, and many have heard about his ballooning, the real story of this incredible adventure has never been told. Using intimate interviews with Branson and his team at the time, never seen before archive (including footage from inside the balloon, shot in real time) and beautifully designed dramatic reconstructions, the film tells a story of courage, determination, despair and ultimate triumph.

Thursday, August 25
BEING AP
Post-film conversation with producer Nick Ryle
Location: Newport International Polo Grounds, Portsmouth, RI
BEING AP takes an intimate but epic look at one of the world’s greatest sportsmen, AP McCoy. Aging but fearless, nearing the end of his career yet still willing to sacrifice everything to achieve his dream in a competitive and dangerous sport. Through this intimate portrait, we are immersed in the colorful, dramatic, and rich world of horse racing.

For more information on the festival, visit www.newportfilm.com