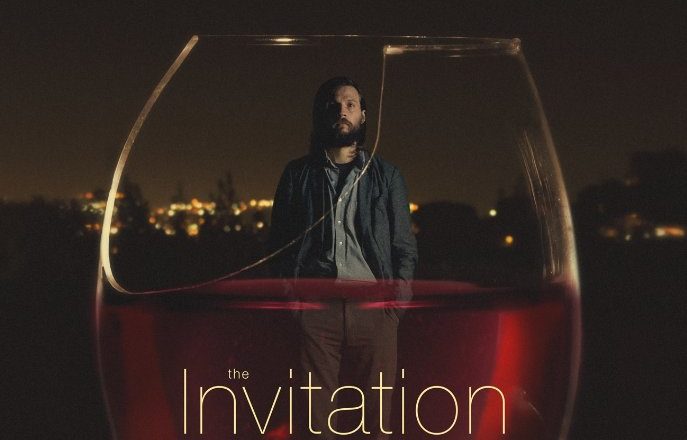 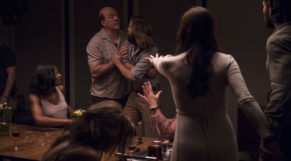 What begins as an emotional exploration of coming to terms with unbearable loss evolves into something even more decidedly dark in the psychological thriller “The Invitation”.

Logan Marshall-Green (“Prometheus”, “As I Lay Dying”) is Will, who along with his girlfriend accepts a request to attend a dinner party among old friends hosted by his ex-wife and her new husband at the home the former spouses once used to share. The couple’s devastatingly tragic past is gradually divulged, soon after which all hell breaks loose in and around the ostentatious house and grounds.

Marshall-Green is very good in a slow burn role as he grows ever more convinced that “It’s not safe here.”  Emayatzy Corinealdi also impresses as Kira, his beyond-good-sport partner, though she doesn’t really have much to contribute until the frenetic final frames of “The Invitation”.  This would follow though as she doesn’t know any of the party goers and spends most of the evening gathering a feel for the lay of the land.

While the progression to all-out chaos makes sense in context, it may have been overplayed in retrospect.  I appreciate the deliberate pace of this story, especially those times when Will takes personal and essential time outs apart from the group to process the inherent emotion and building uneasiness of the eerie evening.  For my money, and I’ll stop short of revealing a key plot element here, the touching scene where Will lies down on the bed toward the frenzied conclusion of the “The Invitation” was far and away the most effecting moment in the movie.  I was helplessly moved to tears. 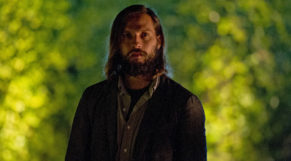 Not a lot to complain about for me here.  While it is true that Will and Kira’s fellow invitees are all largely inconsequential, the exceptions are the creepy John Carroll Lynch (TV’s “The Drew Carey Show” and “Body of Proof”) and the kooky Lindsay Burdge.  Both play strangers to all but the hosts who most mysteriously introduce themselves into the festivities much to the puzzlement of this erstwhile clique of cronies.

Director Karyn Kusama (“Aeon Flux”, “Girlfight”) deftly guides this deeply unsettling narrative toward a shift in tone that is both abrupt and startling. And her film’s jaw-dropping ending delivers absolutely one of the most viciously wicked wallops you’re likely to witness in any movie all year.