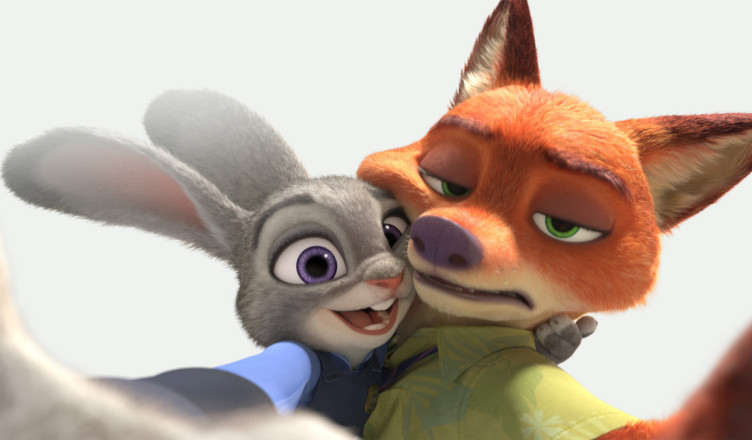 Synopsis: In a city of anthropomorphic animals, a fugitive con artist fox and a rookie bunny cop must work together to uncover a conspiracy. (Imdb)

Over the last couple years we’ve been treated to some really good animated movies such as Up, Frozen, Big Hero 6, Inside Out and now with Zootopia. The selling point is already build it–furry animals. What kid, or for that matter adult, wouldn’t want to see a movie with cute, furry animals. What makes Zootopia a hit is that these animals are given distinctive personalities and backstories and placed into a visually alluring futuristic looking animal paradise.

Judy Hopps (Ginnifer Goodwin) is a bunny that is an overly ambitious rabbit that wants to make a change, defy the odds and become the first bunny to be a cop. Good luck. Hopps (fitting cutesy name) finally gets her chance in Zootopia. There just has to be something that gets in the way of her new dream career, and that thing is Nick Wilde (Jason Bateman). Wild (another fitting cutesy name) is a wildly sly fox. Ok, I’ll just stop with the puns. Hopps being the determined bunny she is (with an apparent Napoleon complex), gets wind of Wild’s hustler business and attempts to bring him to Zootopian justice. A case of a missing otter forces Hopps to enlist Wilde to help her with the search.

Zootopia is a really fun and engaging movie. There is a plethora of animals, all with some human characteristics, yet have the cute appeal. In Zootopia everyone comes together from all walks of animal life. It’s the NYC-LA with a touch of Dubai and Siberia. Point being that it’s an elaborate magical looking world. When Hopps sets out to move to Zootopia on one of those jet fast electric trains, she passes through all sorts of regions and climates. She goes through a desert, a place resembling Antarctica, a rainforest, and then ends up at the combination of all those places–Zootopia.

The characters have a personality that’s distinguishable. As mentioned Hopps is a go-getter, eager, perfectionist try-hard. Wilde is the scheming, charismatic, arrogant, and sly. He’s also a character you can’t fully dislike, he’s likable douchy fox. Other characters that make notable appearances are Gazelle (Shakira) the iconic Zootopian Shakira. Chief Bogo (Idres Elba) is the bullish police chief. The best use of character should go to the sloth Flash (Raymond S. Persi) who steals the movie with his lightning–slow checkout at the DMV. Probably the funnies scene of the movie, though previews have given it away.

The animals are all size appropriate which is an important to have distinguished. Hopps is tiny compared to all her animal counterparts, yet she looks like a giant when she visits the mouse town. Each animal has a city section for their kind.

This is a hard movie to find negatives on. If I were to nitpick I’d say that it would be the highly predictable relationship outcome between Hopps and Wilde. I mean who doesn’t see that coming? The plot has a lot of mystery to it. The search for Mr. Otterton is elaborate scramble filled with twists and turns, the only reason why this could be a negative is that the smaller kids might not be able to keep up and follow, or be interested in following this clever cat and mouse chase that Hopps and Wilde are on.

There is no denying that Zootopia should be a hit. It has all the elements you’d want in an animated movie. Fun and colorful characters with big personalities and some depth. The visuals are uniquely exhilarating. It’s a fantasy world I’d want to visit. I liked the fact that the filmmakers fine tuned all sorts of details like signs that say “Just Zoo It” or “Preyda” instead of Prada. That’s a clever touch to a film that enhances the reality of their world, yet provides us with a chuckle. This is the kinda film where the adults might appreciate the nuances and enjoy the movie just as much if not more than the kids. That continues the trend of recent years of having animated movies appealing to adults and kids. Zootopia is funny and timely, you can’t go wrong with animals, it’s a formula that works, but Disney takes it to another level. As an avid rabbit (I have a pet rabbit named BUNNY) and animal lover, this was an easy sell from the start, but ended up impressing me twice as much.

2 thoughts on “Review: Disney Continues The Hot Steak With ‘Zootopia’”