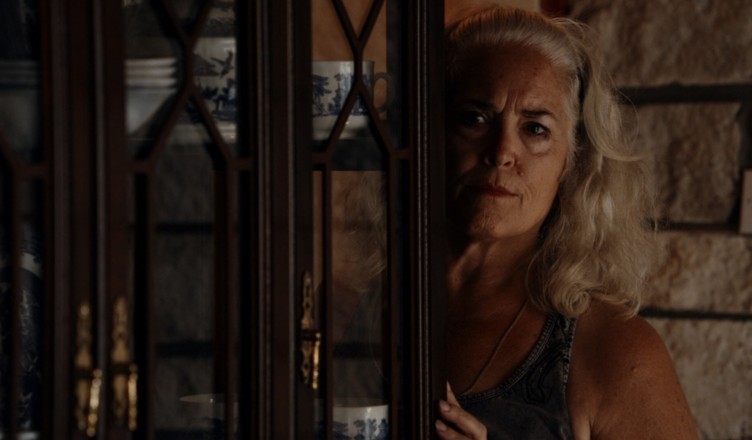 When Krisha shows up at her sister’s Texas home on Thanksgiving morning, her close and extended family greet her with a mixture of warmth and wariness. Almost immediately, a palpable unease permeates the air, one which only grows in force as Krisha gets to work cooking the turkey and trying to make up for lost time by catching up with her various relatives, chief among them her nephew, Trey. As Krisha’s attempts at reconciliation become increasingly rebuffed, tension and suspicion reach their peak, with long-buried secrets and deep-seated resentments coming to the fore as everyone becomes immersed in an emotionally charged familial reckoning.

For reasons never made entirely evident, 60-something Krisha has willfully severed ties for several years with her family, including a now young adult son. She decides to reconnect with her kin for Thanksgiving dinner at the suburban home of her sister and her family.

I grew up in a suburban Texas community not unlike the one which serves as the setting for the entirety of “Krisha”. As such, I can almost literally sense the air, smell the scents and feel the sensibility of the space these characters inhabit. I have lived it. The memories for me are lasting. And they are abundantly good. Not so in this mostly morose and melancholy scenario.

Veteran but still little-known actress Krisha Fairchild (“The Killing of John Lennon” representing one of a handful of somewhat recognizable credits) delivers remarkable and wrenching work here. Fairchild is exceptionally effecting as she gives us a deeply troubled profile of an irrevocably tortured soul riddled with substance abuse, self loathing, uncontrollable anger and crippling regret.

This is a mysterious woman to be sure. Where exactly has Krisha been for all of these years in estrangement? What is it that has occupied her life during this time of indistinct purpose? Krisha reveals only vague hints and innuendo to various members of an uncomfortably skeptical family. Observing the holiday festivities and camaraderie carry on all about her, she remains remote, detached, never engaging in any of it, focusing instead almost exclusively and at her own insistence on preparing the super-sized turkey for that’s evening’s meal.

The very characteristics that make Fairchild’s portrayal so riveting are the same traits that make this excruciatingly conflicted character so dreadfully off-putting. Because we do not come to know practically anything at all about why Krisha ever abandoned her family in the first place, we never have a frame of reference for why she would ever even choose to do this. This confounding ambiguity leaves us feeling as distant from Krisha as she is from her own flesh and blood relatives. How can we genuinely invest in and grow to care for a person about whom we know virtually nothing and who has given us no compelling reason to do so? We feel very sorry for Krisha, sure. But beyond that we are inspired to generate little if any emotion beyond pure pity.

Technically, much of the key speech in “Krisha” was extremely difficult to make out, either as a result of it being overly hushed or garbled as characters talked over and above each other. I by and large appreciate natural dialogue as it is spoken in “real life” in most films, a dynamic that first time feature Writer and Director Trey Edward Shults was clearly striving for in his project. But when it is impossible to decipher what is being said, even after rewinding and replaying these scenes as I was able to do, the overall effect which you are efforting to achieve is unfortunately, and frustratingly, lost in translation. Moments involving Krisha and her wheelchair-bound mentally fragile mother, and what should have been a memorably moving interchange between Krisha and her long-suffering sister toward the end of the picture, are two especially conspicuous examples of these audio recording shortcomings really hurting the overall impact of the story.

This is criticism reasonably forgivable for a rookie from a personal perspective. But ideally they are lasting lessons learned in what, even with these missteps, looks to be a considerably capable career.

This is a depressing movie.  Unrelentingly so. And I know from depressing flicks, having seen my share of them over the years. However, there aren’t many among this gloomy group that I would rank above “Krisha”.

In the end, nothing is clarified and nothing is resolved in “Krisha”. Consequently, as an audience we are left with no appreciable degree of either resonance nor redemption. Only a sad and sour familial holiday experience. And, though granted generally not this extent, haven’t we all in our own lives had our fill of at least some manner of domestic dysfunction? Watching somebody else’s tumult and torture and classifying it as worse than one’s own is not exactly a superlative barometer for satisfying cinematic consumption.

I’m giving “Krisha” a charitable 6 out of 10, almost entirely, and quite candidly, because the film was shot in The Lone Star State and out of high regard for Fairchild’s arresting performance.