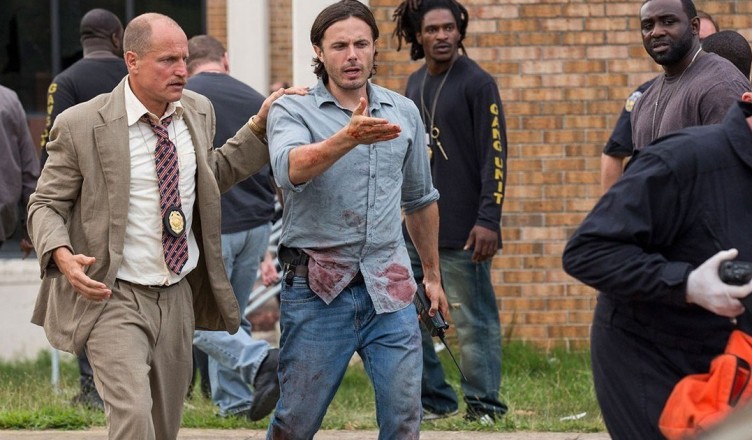 In TRIPLE 9, a crew of dirty cops is blackmailed by the Russian mob to execute a virtually impossible heist. The only way to pull it off is to manufacture a 999, police code for “officer down”. Their plan is turned upside down when the unsuspecting rookie they set up to die foils the attack, triggering a breakneck, action-packed finale filled with double-crosses, greed and revenge. Written by Open Road Films

Director John Hillcoat and writer Matt Cook deliver one of the most brutal and violent thrillers in a while in “Triple 9”. Boasting a strong ensemble cast, the filmmakers has so much talent at their disposal that it has troubles spreading valiant time to all of them. The plot contains many moving parts, so at times it’s difficult to follow, especially if you aren’t paying attention.

A group of corrupt cops is deeply involved with a Russian mob. After a heist puts the police department on alert, mob boss Irina Vaslov (Kate Winslet) orders them to continue their heists in order to get what she desires. Things get more convoluted when one of the corrupt cops Marcus Belmont (Anthony Mackie) is partnered with a new ambitious do-it-right cop Chris Allen (Casey Affleck). The group of criminal cops are caught in a crossfire when they have to carry out Vaslov’s wishes while doing their job and avoiding their co-workers from figuring out their identity.

This is a very compelling thriller by all means. It’s dark, violent, unapologetic, and intense. The plot is smart and elaborate. There are layers upon layers of personal storylines. Each character has a background and depth that’s vital to their situation and links up with some of the other characters. It’s smart writing and crafty directing. The uncertainly from scene to scene of which character will make it further in the film is gripping. Hillcoat sets the right kind of mood where there is constantly something at stake for each person.

The richness of talent appearing on-screen is impressive to say the least. There is no clear-cut star, but if I had to pick the leads it would be between Casey Affleck and Woody Harrelson. They are the “good guys”, even though Harrelson’s character is borderline manic. It’s a shame that Affleck is such an underrated actor, he clearly has the chops to be considered one of the best in the business. He shines among the other heavyweights in the film. Anthony Mackie is also really good here. He always seems to be the comedic relief in the roles he plays, but this is a good serious role for him with some depth to his character. Aaron Paul does some fine work, a bit reminiscent of “Breaking Bad”.

Some things that make this movie compelling are the same reasons where it undermines it. I get that this movie is super violent and doesn’t shy away from brutality, however is it necessary to have an entire scene focused on a few human heads placed on a hood of a car for others to crack jokes about? The complex plot and multiple layers were things I appreciated, but also it gets so messy at times with all the double crossing and personal interest of each character.

Speaking of characters, Kate Winslet is this over-the-top ruthless Russian mob boss. Seems like a role Winslet could have had fun doing, but it doesn’t display or utilize her acting abilities in the best way. Woody Harrelson’s on-screen characters are turning into Gary Busey. He’s constantly mumbling something obscene, you can’t event understand most of the things he’s saying, just have to figure it out based on his outrageous actions. One of them being taking a blunt from a hooker he arrests and smoking it.

What “Triple 9” accomplishes best is that it knows what it is and owns it. It’s violent, brutal, sadistic, and it rolls with it throughout, there are no questions, there is no identity mixup. This is a gritty and dark crime thriller that takes you to locations and setting that make you uncomfortable. You see the dangerous sides of Atlanta that you wouldn’t dare to find yourself in. The world of crime is depicted on the streets and on higher levels of mafia operation. The stellar cast had me excited going into it and satisfied after seeing it. Ultimately everything comes together at the end and loose ends are tied. It was hard not to look away at times, but I couldn’t keep away from the suspense and intrigue. Might not be a movie for everyone due to its graphic and gruesome nature, but you can’t deny the quality of this thriller.