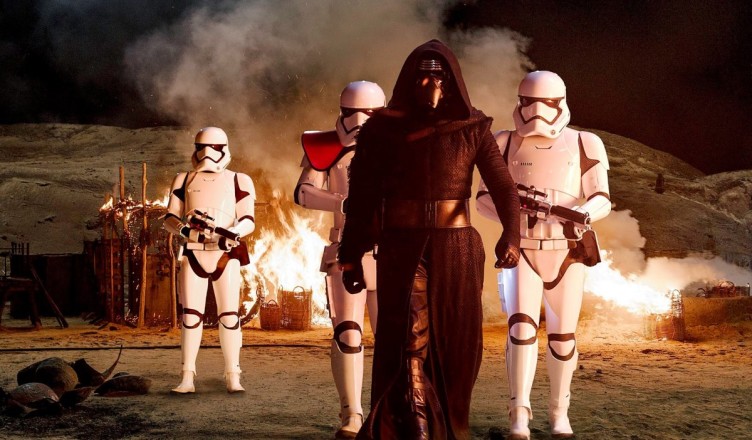 Synopsis: A continuation of the saga created by George Lucas and set thirty years after Star Wars: Episode VI – Return of the Jedi (1983). (Imdb)

The Force has awakened the Star Wars franchise from a long coma. The hype for “The Force Awakens” has reached a manic level. J.J. Abrams has the insurmountable task to satisfy a fanbase that’s starving for him to re-create the Star Wars nostalgia of the past that will make them forget about the last three films. Abrams succeeds on delivering the best Star Wars since the early 1980’s, and one of the best ever. The classic opening and John Williams musical score remain. The opening intro with the title and the sliding description with the story set-up are done the same way as they were in 1980.

“The Force Awakens” introduces its three new prominent characters to the Star Wars universe. Daisy Ridley is introduced as Rey, a scavenger that unintentionally gets involved with the Resistance. The strongest female character since Princess Leia. John Boyega is another newbie coming into the franchise as a mainstay, he plays Finn, a Stormtrooper that’s on the run from The Force. Oscar Isaac is everywhere these days, so it’s only natural that he’s included in the new Star Wars. Isaac is Poe Dameron, an expert pilot that wears an orange jumpsuit, sure sounds like someone familiar.

A lot happens in act one. That’s where all three of these characters are introduced and come together, and they are all linked to the charming little droid BB-8. He serves as an important linchpin to these new characters, as well as the overall storyline of the film. He serves as Rey’s R-2 D-2. The introduction of the characters is well established, although due to time constraints are somewhat rushed. You don’t get the entire reasoning why these characters are doing what they do, and what’s their motive. Rey is homeless, without family, and living day to day being a scavenger in the empty wastelands of Jakku. Unbeknownst to her she’s pretty much a Jakkuvian Macgyver.

Adam Driver is established early on as the evil and imposing Kylo Ren, or Darth Vader 2.0. Driver, known for his quirky characters in romantic and smart dramatic indie films is actually the perfect for this role, it’s because we haven’t seen him take on anything remotely similar to the role of Ren. Finn’s character is introduced in the early portion as a Stormtrooper gone rogue that actually has conscience, but is that the real reason why he turns? That’s not completely explained. Finn does provide constant comedic relief, and goes toe-to-toe with Han Solo when it comes to witty and funny dialogue.

These new younger actors don’t just represent an infusion of new blood in the franchise, there is a societal commentary by bringing them aboard. They represent a modern age of cinema diversity. Ridley’s character is a fierce woman who is tough, smart, and can fight off any man or enemy. She’s a female heroine in a prominent and important role in terms of the story and significance. This sends a message of the importance of female characters in cinema, and in the action adventure world. On a personal note, Ridley has this Keira Knightley thing going for her. Not only does she resemble Knightley, her facial expressions and jaw movement are identical to Knightley. Plus they are both British brunettes, so that doesn’t hurt either.

Boyega is a talented English actor who happens to be black. Including him as one of the central figures in the film really adds some much needed diversity to the franchise. He’s very charming on-screen, and surely to be a fan favorite going forward. Isaac is one of the better young talents in Hollywood, securing such a rising star is a huge coup.

This is the first Star Wars film that’s backed by Disney. The concern was that Disney would be too PG and tone down on the action, but the film doesn’t miss a beat, it’s as if Disney had no involvement in it. The action is well put together, not too over-the-top, and also not limited. There are plenty of exciting chases and battles. Even the Millennium Falcon gets dusted off and taken for a spin. No worries, the lightsabers get a workout in the film also.

What ultimately this movie accomplishes is it bridges the gap between the Star Wars movies from the 80’s to this one, while bypassing the garbage that was the last three films. It’s a collection of Star Wars all-stars from the past coming together and passing the torch to the stars of the present and future. For sports fans this feels as if you combined the 90’s Jordan Chicago Bulls with the Lakers of the 2000’s, or even Steph Curry’s current Golden State Warriors team. Han Solo and Finn in the same scene. Leia and Rey. That’s pretty cool stuff. The abundance of talent in the film is at times overwhelmingly pleasant. There are plenty of laughs throughout the movie, along with plenty references to the past films. You don’t have to be a die hard, or even watched all of the previous films to enjoy “The Force Awakens”. It’s important that casual and young fans can grown with this franchise going forward.

Personally I’m not a Star Wars die-hard–never been. I have seen all the films, and as a casual fan I appreciate them for what they. “The Force Awakens” is an exciting film. The story arc is supremely crafted. The introduction of the new blood, re-introduction of the nostalgic characters of the past, set-up a couple twists along the way, and lead up to a payoff that sets up a new story going forward. To accomplish all that in one movie is a credit to Abrams, Lawrence Kasdan, and Michael Arndt. It’s hard to ignore all the hype, but the movie stands on its own as being a quality movie, Star Wars or not.

“The Force Awakens” might be one of the most ambitious fan pleasing attempts made in any movie franchise. Credit Abrams fro officially resurrecting two prominent and beloved franchises in Star Trek and Star Wars. Keeping up with the sports terms, he’s the Phil Jackson, or better yet it’s time to start comparing him to Mr. Star Wars George Lucas himself. The nostalgia is alive and well. May the force awaken you from a long overdue Star Wars nap.

8 thoughts on “Review: “Star Wars: The Force Awakens” Links The Past With The Future”