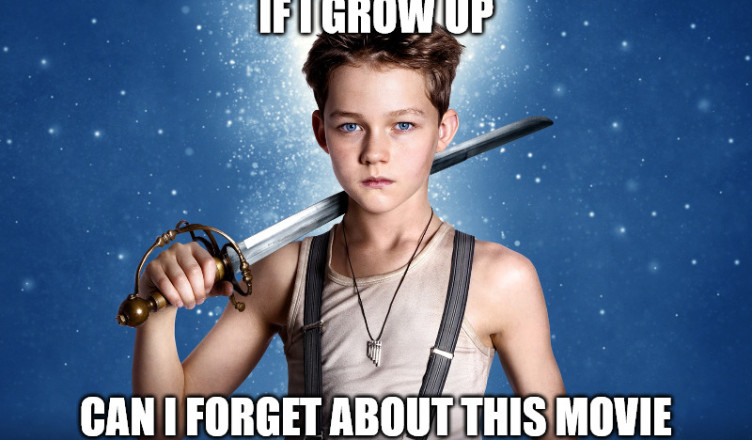 So, I was riding in my new 2016 Lamborghini heading to Trader Joe’s (side-note: this is my story, and I’ll tell it as I wish). While sitting in traffic, I started to think about the movies that bombed this year up to this point. Some that crossed my mind included: Fantastic 4, Jobs, Jem and The Piece of Crap, Rock the Kasbah, and Pan. This brought me to ponder further exactly why did Pan flop? Pan had everything going for it. It had a preexisting fan base, a beloved franchise, marketability and appeal to children and adults, a big name studio backing them up, and some pretty good actors. The question then becomes, what happened? I got a few theories. My first theory involves property hubris. What is that? Well, property hubris is where a company starts to get cocky and begins to think that their property is bigger than it actually is. I believe that in the perspective of a studio, everybody must love Peter Pan. Unfortunately, this property hubris cause temporary blindness to the fact that not everyone loves Pan. If you ask most people of their thoughts, they really can go either way with Peter Pan. The 1953 version is a cinematic classic, but isn’t in anyone’s top ten list, nor anyone’s top 20 if we are being quite frank. Peter Pan is too far removed from generations. If my mother saw this when she was six years old, then this is too old to rehash to the children of our current generation. It did nothing to sustain itself in pop culture (which is the cloth of much of society). As a result, it has fell in the back of people’s minds. I would go as far as saying Peter Pan has no fans. And, why do I say this because of terrible pre-marketing.

This leads me to my second theory revolving around terrible pre-marketing. For the last 10 years plus, Peter Pan has been marketed to girls via Tinker Bell. Tinker Bell has become the main face of the franchise. She has her own line of books, tv shows, toys, and live action (soon to come). Consequently, the franchise is not appealing to boys due to the mass marketing campaigns of Tinkerbell being the “it” person for Peter Pan. And, girls aren’t really into Peter Pan because of the film’s scary nature due to there being pirates, fighting, and slavery. If they were serious about the film, they would have had a hard core campaign of connecting to children, but instead they tried to appeal to the adults who once were children of another time period.

This leads me to my third and final theory. Peter Pan didn’t know which demographics to target when appealing to mass audiences. Watching Pan was like watching a four year old trying be “k-o-o-l”.  At times, the film was dark and gritty to draw the attention of adults. But, at other times, the film was colorful and lively to entertain the kids. Trying to playoff the now infamous Toy Story formula. Here’s a tip, if you make it for kids the parents will follow. Being a parent, I never walk into a movie theater expecting  good kid’s movie. If its great, fantastic. If it isn’t, oh well because I am never watching it again. My son is the one who is going to have the movie on DVD on non-stop replay. So, studios take time to please and entertain him, parents are secondary, because once he and countless of other children love the movie, everything else will fall into place (i.e. a sequel, toys, costumes, tv shows).

As I get out of the Lamborghini and watch a crowd start to form in an attempt to get my autograph, I begin to think to myself. I realized how Peter Pan is not a property that can be thrust back into society. It has to be slowly reintroduced, and that is for it to even have a shot of becoming a blockbuster. Today’s generation is not as welcoming to concepts from the golden age, especially those that don’t put forth effort to engage and adapt today’s mindset of our youth. So, advice for Peter Pan – YES, you are going to  have to kick, scratch, and claw your way back into the pockets of today’s generation.

One thought on “My Theory On Why Pan Flopped”