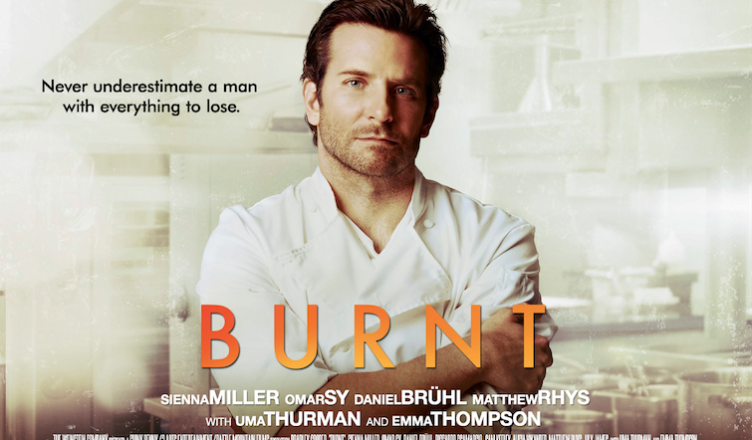 Synopsis: Adam Jones is a Chef who destroyed his career with drugs and diva behavior. He cleans up and returns to London, determined to redeem himself by spearheading a top restaurant that can gain three Michelin stars.

“When was the last orgasm you’ve had that was interesting?,” Bradley Cooper’s character asks that question in “Burnt” (available on Blu-ray and DVD). Take out the word orgasm and insert “movie you watched,” and “Burnt” will cook up a definitive answer. A burnt out chef that’s trying to get his life and career back on track — it’s been done before, most recently in the Jon Favreau’s “Chef”. Director John Wells (August: Osage County, The Company Men) takes a food inspired comedy and adds layers of darkness and depth to it.

Chef Adam Jones (Bradley Cooper) is a world-renowned chef. Idolized in the culinary community for his cooking talents, yet forgotten by many, due to his pompous attitude and drug abusing ways. Jones is a unlikeable character that somehow manages to get you hooked on him from the start. He’s arrogant, narcissistic, all while being rebelliously charming. He wears a black leather jacket and rides a motorcycle, does that scream Chef? He’s the emotionally broken douchy guy that men can’t stand and women are drawn to.

By showcasing the addiction troubles Jones is dealing with, Wells takes a comedy that could have easily been centered around food and makes it a secondary focus in the film. The food itself is still there, and there is plenty of it. The fried fish looks crisp, the meats juicy, even the vegetables appear mouth-watering, the food close-ups are there to give you foodgasms, and they accomplish that. The food element is still intact, and it doesn’t take away from the main objective, which is the relationships between the characters.

Cooper is the star of the movie. It’s as much of a showcase for Cooper, as the plot is centered for Chef Jones. It’s refreshing to see Cooper be able to let loose and play the jerky-charming guy and not have Robert De Niro and Jennifer Lawrence lurking in the shadows. The supporting cast in the film is strong. Sienna Miller, whose been ascending to leading lady status in the past year plays Helene, Coopers romantic interest in the movie. There is a dynamic love-hate relationship between the two. A scene where Cooper’s character physically attacks her makes you wonder if they actually will connect with each other at the end of the film. Daniel Bruhl does great work as the gay restaurant owner Tony, who has a lot more love and patience for Jones than Helene has.

Instead of throwing an overabundance of delicious looking dishes on-screen, Wells adds an array of personality to the characters. There is Jones as the addict who has drug and anger issues, while lacking compassion. Helene is the single mother trying to make ends meet while raising a young daughter. Tony is a gay man who keeps everything together when they look the bleakest. This rich flavorful cast of characters is what drives the film. Flawed people who frustrate as much as they appeal.

“Burnt” has a great blend of all you could ask for in a film. Cooper’s clever one-liners. Perfect looking food that would make Chef Gordon Ramsay (chef consultant on the film) blush. A complex and unpredictable romance. Very good acting with well-developed characters. Also more than a few laughs provided along the way. It’s an ambitious and fresh take on a movie theme that mostly plays is safe and stale. A Michelin scale is what a Chef greatness is measured by, and this film gets all three stars on that.

One thought on “Review: Burnt Is A Fresh Blend Of Food And Characters”