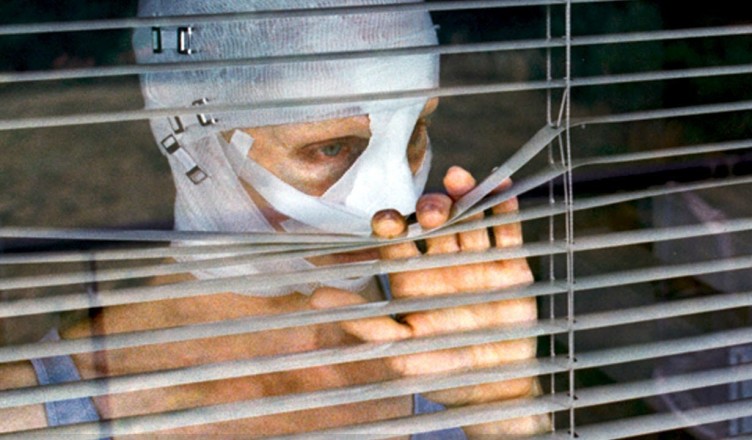 Synopsis: Twin boys move to a new home with their mother after she has face changing cosmetic surgery, but under her bandages is someone the children don’t recognize.

Goodnight Mommy sounds like a sweet and sincere movie title, this movie is anything but that. This Austrian horror will leave you sleepless for days. Directed by Severin Fiala and Veronika Franz, two women with a great feel for suspense. The story takes place in the remote countryside woods in an obscure part of Austria. Two twin nine-year-old boys Lukas (Lukas Schwarz) Elias (Elias Schwarz) move into a a big brand new house with their mother (Susanne Wuest). The first impression of the mother on-screen is daunting. She’s staring at a mirror bandaged up like a mummy. Not what you would expect to see. There is something very odd about the mother and even the kids don’t understand what is going on with her. The eeriness and tension is unspoken. The mother appears to be a young woman, a TV personality actually. She is a harsh disciplinarian, a control freak. The boys are extremely obedient and do whatever the mother orders them to do. The boys curiosity and need to know what happened to their mother leads them on an unexpected path of discovery.

The majority of the film consists of three characters, the mother and her two twin sons. The Schwarz brothers do a real nice job in the film, especially considering it’s their first ever film credit. They act like regular nine year old kids would, they brawl each other, they play on the trampoline, entertain each other by playing games like hide and seek, they even nurture a homeless cat. They are also very mature kids, they are in charge of literally ALL of the household chores, as the mother refuses to come out of her room. They are curious kids, but also very mature and responsible for their age. The film uses the real-life names of the kids in the film.

This is a very suspenseful film. Right from the moment the mother is introduced the first thing that came to my mind is what happened to her face?! Did she have an accident? Was it self-inflicted? Is she even human? Was it plastic surgery? Plastic surgery seems to be what the filmmakers try to hint. She unwraps her bandages slowly, and as the movie moves along the more is revealed. The filmmakers are very careful in covering up any and all images of her in pictures throughout the house. It’s a sort of tease where you expect the eventual unveil to be of some major significance.

While the first two acts of the movie focus on the mother and the anticipation of her removing the bandages to uncover her identity. Act three flips the tables and twists the entire plot around. What I appreciated about the movie is that the filmmakers don’t go for the cheesy and easy scares. The suspense of the plot is what keeps you on edge, and that’s what is terrifying–the unexpected. Without giving much away there is plenty of disturbing action where it’s hard to not look away.

Goodnight Mommy is a throwback kinda horror. No CGI or special effects, just plain and simple terror. The film is so intriguing that I found myself forgetting that it’s also entirely in subtitles. It has all the right ingredients that a horror movie should have, chilling, suspenseful, intense, and tense. The twists are smart, and the third act had me questioning all that I have seen prior to it. Credit to Fiala and Franz for crafting a clever, smart, and intriguing movie that will keep you guessing till the end.