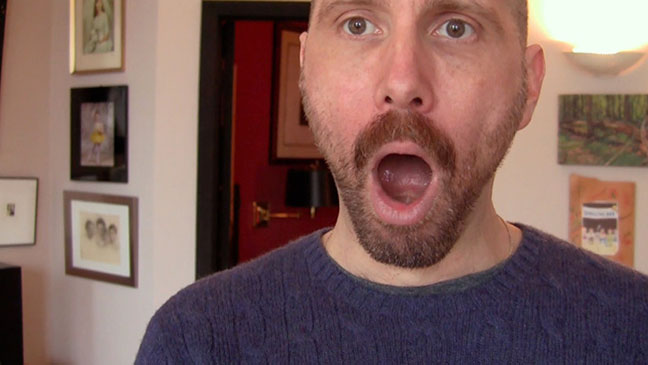 After a breakup with his boyfriend, journalist David Thorpe went on a journey of self-discovery and curiosity regarding his voice and why some men, mostly gay, have effeminate voices. In his first documentary, Do I Sound Gay?, which expands to more theaters this weekend, David visits and interviews various coaches, a few linguists, family, friends, and LGBTQ celebrities providing an audience with a snapshot of this complex issue. This is a very interesting documentary because I never liked my voice and had to overcome a speech impediment throughout childhood. I had an opportunity to speak with David Thorpe over the phone to discuss personal challenges in making his first documentary, what self-realization he found to be most unexpected, and what he wants viewers to take away from watching Do I Sound Gay?

One notion that needs to be straightened out about Do I Sound Gay? is the fact that many people could relate to this documentary whether they are gay or not. Many people do not like the sound of their voice. This truth ranges from minor annoyance to genuine anxiety. Somewhat, but not really, similar to the documentary Unhung Hero about comedian Patrick Moote coming to terms with his own penis size, it requires a lot of confidence to make a documentary about your own voice. David Thorpe does a great job of confronting issues of sexuality, identity, and self-esteem throughout its brisk running time.

David Thorpe knew he needed to say something about this issue, but wasn’t sure how to go about this. He finally settled on making a documentary. After all, we needed to hear his voice.
“At the beginning of this project I wasn’t sure what to do,” David Thorpe said. “I wanted to write a book and decided to make a film. I didn’t want to be in the film. My own experience to sounding gay had an influence on it. We all monitor aspects of ourselves all the time because of the stigma.” Another issue David Thorpe wants to audiences to realize is there is no such thing as sounding straight. Do I Sound Gay? confronts the stereotypical gay male voice. There is a scene where his discusses hyper masculinity in the gay male culture. Even though David wanted to bring thing up within the LGBTQ community, he didn’t want to shame men for having that attraction.
“I don’t want to scold anyone by being turned on by masculine men,” he said. “Sometimes in the LGBTQ community it is hard to tell if the pursuit of straight acting men is a genuine or a product of the brainwashing of sexist culture. I’d like to think you can have you fetish but not punish people who aren’t masculine. Gay culture is no different than culture ‘culture.’ We have a lot of the same hang ups.”
For a first time documentary, David Thorpe found the process of reaching out to prominent gay figures for interviews as natural to him. He was able to land interviews with those famous individuals such as Dan Savage, David Sedaris, and George Takei who make an appearance in the documentary providing Do I Sound Gay? with an additional layer of perspective. It wasn’t hard for them to get on board with this project.
“I just asked. I didn’t twist anyone arms,” he said. “All of the famous people in the movie responded to the movie talking about homophobia of sound gay. They thought it would be a good way to address it and gay identity as well as individuality. They were as curious as I was.” While making this documentary, David Thorpe had a few surprising revelations about himself that he believes will make him a better person. This had to do with a famous and respected gay man admitting serious insecurities.
“The biggest revelation was that other gay men had the same struggle as I did,” he said. “Likewise I was able to find that Sedaris despite all of his success that he too has moments of shame which he expresses.
Another issue the film mentions are how the people around David thought he changed his voice after coming out. David experienced a lot of mixed emotions but ultimately found it freeing.
“A lot of people have responded to that [scene] in the film,” he said. “For me, when she said it, it was a really painful and really liberating revelation. I was using an imposter’s voice. In a weird way, Michelle got my voice more than anyone else.”
Do I Sound Gay? had a significant world premiere at the Toronto Film Festival last fall and won the First Runner-Up, People’s Choice Award for Documentary. David remembers that experience and wants audiences to understand a few things about gay men and how people speak.
“The crowd was so ready for a movie about this subject. It was one of the best nights of my life,” he said. “I want people to engage with the movie and how they view themselves and LGBT people. Mostly I want to make people think about what it means to be gay and to be an individual… Also, there’s no such thing as a gay voice. It isn’t limited to gay men. There are men who more or less sound stereotypically gay. It is a stereotype and it is real.”

Do I Sound Gay? is now playing in select theaters and on VOD.