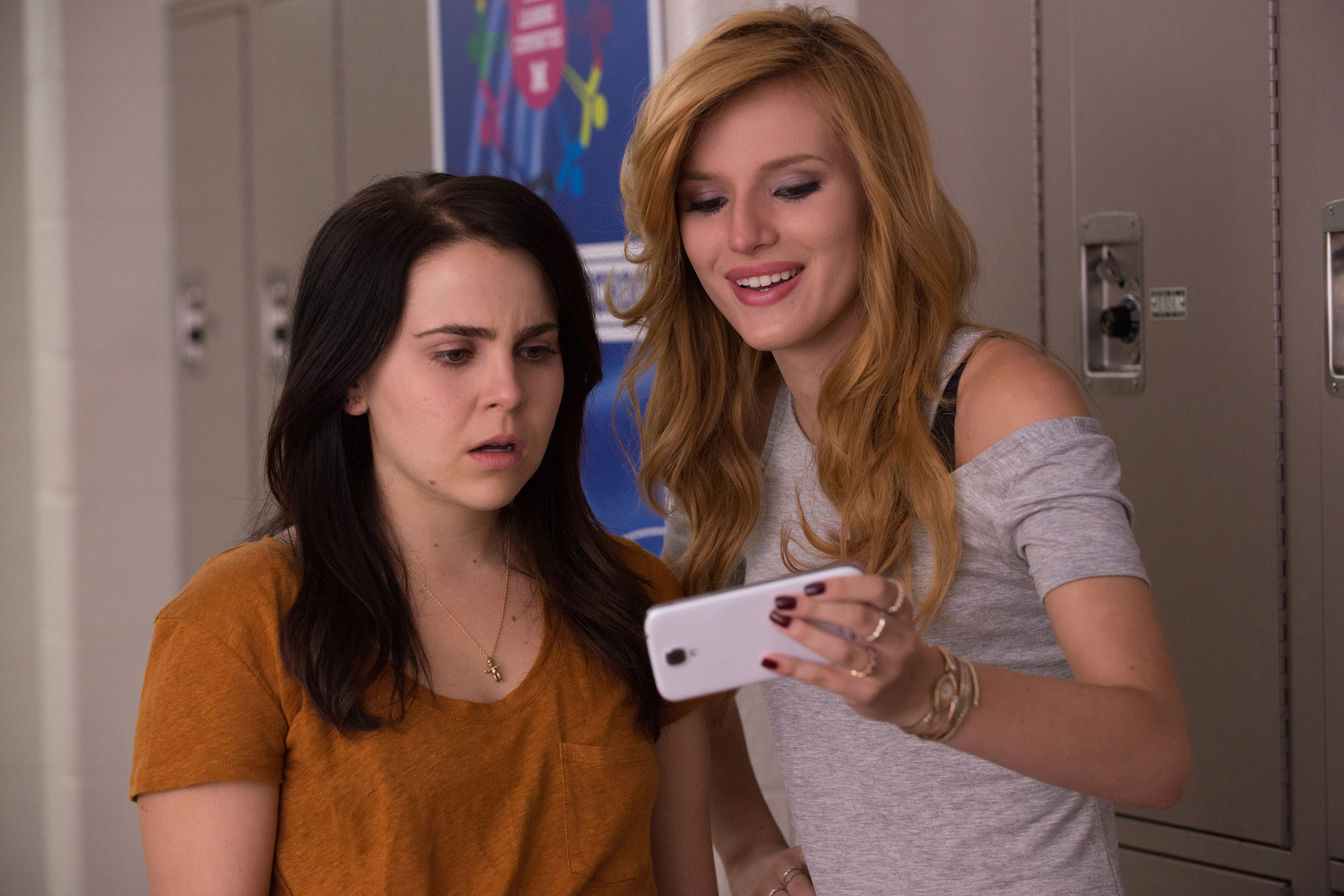 Synopsis: A high school girl attempts to change her ways and prove she’s more than what others see her as.

Finally a teen comedy that packs charm and fun. It’s been a while since Mean Girls changed the landscape of teen high school comedies, and it’s been even longer since the likes of Clueless and the John Hughes teen movies of the 80’s guided a generation of American youth. The Duff (Designated Ugly Fat Friend) is a bit of a homage to those teen classics, with a modern twist.

Bianca (Mea Whitman) is not your typical nerd/unpopular girl. She’s actually best friends with two of the high schools most popular and pretties girls. So what’s the deal with Bianca then? Well, she’s the girl that pretty girls befriend, just so they feel more attractive being around someone lesser. Bianca is unaware of how everyone at the school views her. She’s the gatekeeper for anyone interested in her friends. While at a party Bianca comes across the popular school jock Wesley Rush (Robbie Amell), who also happens to be her neighbor. Wesley refers to her as a “DUFF” (Designated Ugly Fat Friend), it’s from that moment that Bianca realizes how the entire school views her.

Instead of pitting the jock against the nerd, the film goes in a non-stereotypical direction. Wesley and Bianca come to a joint agreement. He will help get her out of her shell and land a date with her crush, a guy named Toby, in return she will help Wes pass his chemistry class. What ensues is a series of trial and error events that draws the unlikely duo closer to each other, all while Wesley’s ex tries to get in the way and further ruin Bianca’s life.

Director Ari Sandel and writer Josh Cagan do a really nice job of conveying the emotions that Bianca experiences throughout her path to shedding the DUFF label. There are some genuine moments in the movie where you feel for both Bianca and Wes. The movie is filled with charming and awkward moments that many high schoolers should be able to relate to. The scene where Wes takes Bianca to the mall and has her attempt to go up to random guys and ask for their number. Most of us have experience similar moments in our lives where our friends urge us to walk up to an attractive stranger and attempt to start a conversation, which always ends up ending in stumbling, fumbling, a dry mouth, and armpits swelling with perspiration.

The most sincere moment occurs when Wes and Bianca share an intimate and heartfelt moment in the woods discussing Wesley’s problems at home. It’s scenes like that one that give the movie some credibility and separate it from just being another forgettable teen comedy.

If you haven’t heard of Mea Whitman, you better start noticing. She is the rock and heart of the movie. At times you may feel annoyance with her character, who is portrayed as overly sassy and rude, on the other hand you will fall in-love with her genuine persona and struggle to fit in. Whitman adds layers to a role that easily could have been cliche and vanilla.

Robbie Amell plays one of the more charming and sweet movie jocks you will see, he’s more of a dork than your typical dumb jock. He’s got the looks of a young Tom Cruise, an Abercrombie model with acting chops. This is an actor that really has the potential to make some waves in Hollywood. Perfect casting.

Bella Thorne plays the evil mean girl Madison Morgan. Thorne is also an up and coming actor. She is also cast really well. A blend of bitchy, jealous, and ultra pretty is what makes her a good villain.

Also making appearances in the movie are Ken Jeong as a supportive teacher. Jeong is his usual entertaining and outrageous self. Allison Janney plays Bianca’s semi-neurotic mother Dottie. Looks like Janney had a lot of fun embracing the role.

The Blu-ray/DVD combo comes with some fun special features. The Duff Hits The Red Carpet is a 3 minute plus compilation of footage and excerpts from the Hollywood premiere of the movie. Extended Gag Reel is a 3 minute outtakes compilation, it’s fun. Bringing The Book To Life is over 2 minutes documenting the book inspiration for the movie. Teen Comedies And The Duff is a 2 minute feature looking at some of the various teen comedies in comparison to the film. The Duff Files is a 1 minute plus feature giving you a quick glimpse into the main characters in the movie. Overall, the features are fairly short, but fun.

The Duff is a refreshing teen comedy that might be the best of it’s genre since Mean Girls. It has heart, charm, and humor. The acting was impressive, and the casting was stellar. Sure, there are moments that this movie falls short. The predictability of the story makes a fairly obvious reveal midway through. Some scenes are overly corny and cheesy. What stands out the most is that this movie might have been an opening for three potential stars in the making in Whitman, Amell, and Thorne. It’s an awkwardly sweet movie that’s entertaining for the teens and even young adults who can reminisce on their high schools days. The incorporation of social media, and it’s role in this generation of teens is fittingly portrayed in the film. In the end the movie sends a good message, embrace who you are and own it.

Thoughts: I really enjoyed this film. As someone way removed from my high school days, I  probably shouldn’t have related to it and enjoyed it as much as I did, but I did. The movie has a nice message for today’s youth, embrace your faults and be you. It’s a positive message that the movie conveys, in the days where bullying is done in person and through social media. I had no idea who Mae Whitman was prior to this film, what she proved to me is that this girl is dynamic, brings life to her character, she’s real. Still a bit puzzled how a pretty girl like her could be considered a buffer that guys wouldn’t date? Hard to believe.

Don’t Mess With The DUFF