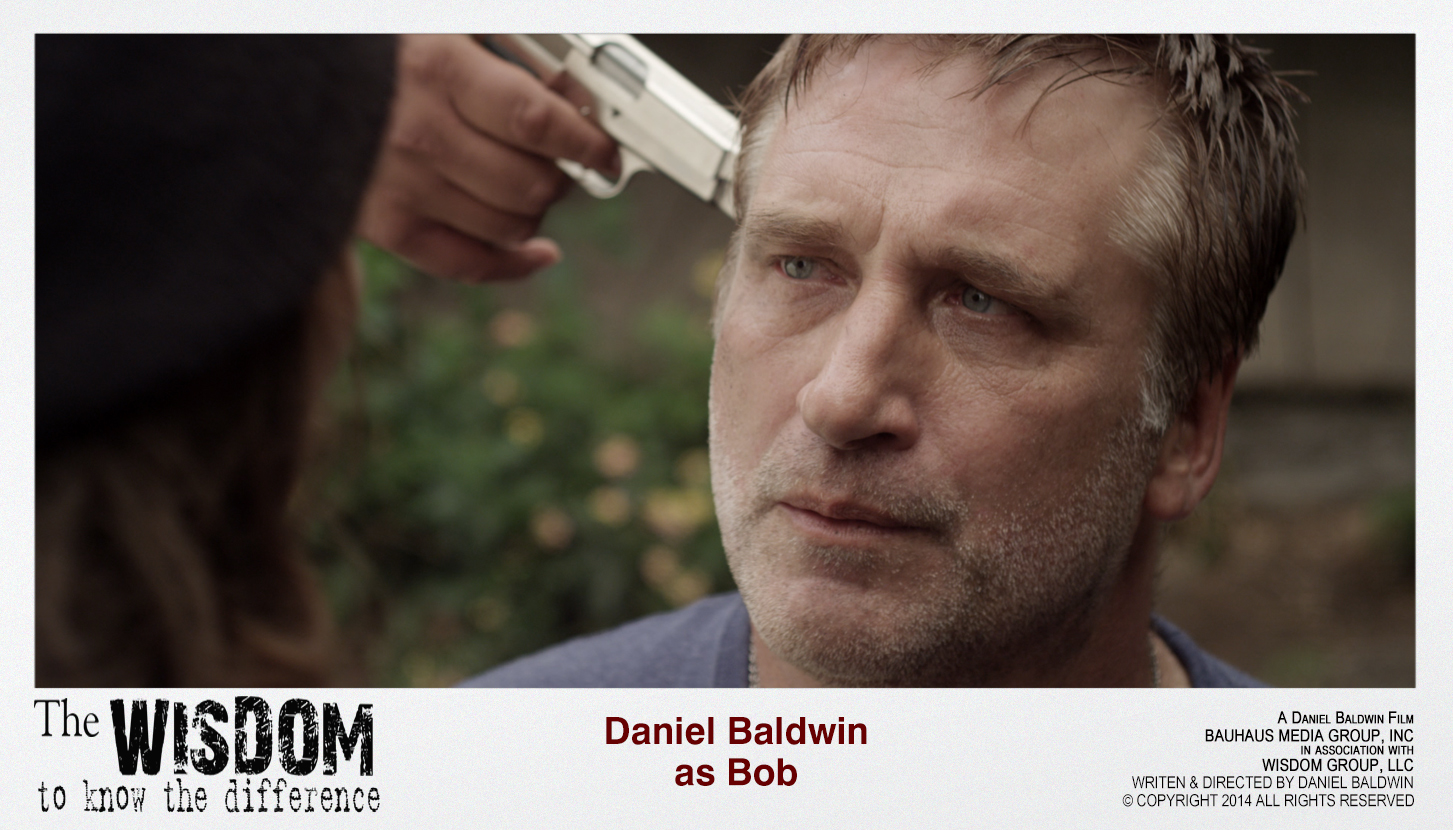 Synopsis: The Wisdom to Know the  Difference is a story about a man’s journey to bring his sobriety full circle and help a young girl kick a serious drug problem. Bob disregards the tremendous dangers he encounters and puts his own life at risk, at the request of old friend.

When you hear the phrase don’t judge a book by it’s cover, this film fits into that mold. The Wisdom to Know the Difference is a film directed, written, and starring Daniel Baldwin. This film is more than meets the eye. It’s based in part on true events and an individual that Baldwin was familiar with.

Bob (Daniel Baldwin) is a recovering drug addict. He has gotten his life in order and is living on the straight and narrow. That is until he gets a request from an old friend. Carlos (Lou Diamond Phillips), is serving a jail sentence and asks Bob for a favor. The favor consists of rescuing a girl from drug addiction. Bob must face his demons once again as he tries to save a life. The doesn’t have an elaborate story, it’s straightforward. The plot is a big boring at times, yet very compelling at the same time. The visuals are eye-opening. The portrayal of drug addiction is as life-like as it gets. The film gives you an inside look at what struggles addicts go through as they navigate to a sober and clean lifestyle. It’s not pretty. The film does an outstanding  job of showcasing how scary withdrawal actually is.

On the surface this probably isn’t a film that will draw you in based on its star power alone and it isn’t a film that’s visually appealing to me. It was made on a low-budget and it shows at times. Daniel Baldwin does a good job of making it work with the resources he had available and we are provided with something “simple”… yet that’s what this film should be! Anything more would definitely take away from the story.

The acting in this film is not it’s greatest strength. Daniel Baldwin does a fine job in his role portraying his character ‘Bob’ whom is a life-long addict and has a quirk in his personality. To the casual observer it might initially appear as “bad acting” but on Baldwins behalf– it’s definitely not. He carefully and purposely crafted his character to have this personality quirk in which he appears a bit slurred. It’s a good choice by Baldwin and it gives you an idea that even though you might be living a clean lifestyle, years of drug use has a profound affect on your body and mind that you can’t get rid of or hide.

Mayra Leal plays Hope (a clever choice for a name). Leal is solid in her role, but not spectacular. Daniel Baldwin has a presence on-screen and helps carry the scenes in which they are together. Lou Diamond Phillips is very natural in his role as  the convict Carlos and there is a memorable scene where Carlos records a message for Hope that you can look forward to seeing. You see him get really emotional while conveying his message to her, with snot streaming down his nose to accentuate the scene, it made it look incredibly natural. I got the feeling Phillips was battling a cold, but there is something to be said for Baldwin as a director letting a scene like that keep going in one single take, instead of attempting to go for perfection and cutting the scene. William Baldwin only makes a brief cameo at the beginning of the film and that one scene was pivotal. It’s not because it’s the first time Daniel and William have been in a film together, but the conversation they have is one you can imagine them having in real life when Daniel battled his own addictions. It’s a rare moment that gives the film that much needed authenticity from the start.

The Wisdom to Know the Difference is an educational film. If you haven’t been exposed to the dark side of what drug addiction is and the recovery process, this film is like a manual to it. Drug addiction is scary and withdrawal is equally terrifying. You feel real compassion for the characters who struggle with this and I really appreciate Baldwin’s attempt to touch on a topic in detail and depth that many filmmakers overlook. There is no doubt that this film seems and feels like a passion project for Baldwin. I think People should see this movie. Not just for the entertainment factor, but for an educational one as well. It doesn’t hold back or hide the horrors of addiction and it’s “upfront and open” approach is refreshing. Being a person who has never been near drugs or addicts, I was in awe of what these people go through. Recovery isn’t easy, and you can see that in this film. People make bad choices in life, but to correct those mistakes it takes a lot of help and support from friends and family. That is the main message of this film.  If seeing this film can make a difference in one persons life, then there is no amount of money, publicity, or awards can equal saving a life.