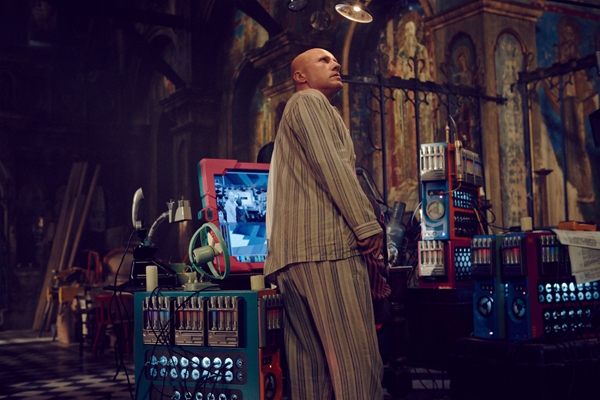 Synopsis: A computer hacker whose goal is to discover the reason for human existence continually finds his work interrupted thanks to the Management; namely, they send a teenager and lusty love interest to distract him. (c)Imdb

Zero Theorem available currently on VOD and opening in theaters nationwide on September 19th is the latest wacky adventure from filmmaker Terry Gilliam. First thoughts were damn this movie looks colorful! Colorful it is. There is no denying that Terry Gilliam as an eccentric-unique style. The visuals in this film is sort of like Willy Wonka on steroids. I’ll let you ponder that for a minute…Ok, back to the movie. The reason that I am delving into the visuals from the get-go is because they are so elaborate and striking. The film sort of looks like a video game, which I do believe is what Gilliam was going for.

The story centers around  Qohen Leth, surely it’s a bizarre name for a character. The names and visuals aren’t the only weird thing about Zero Theorem, the movie itself is just simply weird. If you are trying to follow the plot of it, then you might have to watch it about 10 times. Good luck on understanding it. I gave it my best shot, but once again I don’t think Gilliam intended for this movie to make much sense?

The acting in this film is what will get you to see this film. Christoph Waltz plays Qohen and he looks nothing like Christoph Waltz. There is nothing Waltz can’t do. He’s easily becoming one of the best character actors in the business. Still wondering how Waltz made sense of this script? Matt Damon makes an unexpected cameo in the film as the mysterious “Management” guy. Damn does a solid job delving into the character whenever he appears on screen.  Damon’s character bears significant resemblance to the Riddler in Batman Forever. In fact the first thing to come to mind watching this film was the visual and character similarities to the Batman Forever movie. You would have to think Gilliam did some homework on Joel Schumacher films. One of the more entertaining performances in the film comes from Lucas Hedges who plays Bob. Hedges character is all over the place. He’s wacky, outspoken, and foul-mouthed. He’s pretty entertaining.  Other recognizable actors making cameos in Zero Theorem are Tilda Swinton, Peter Stromare, and David Thewlis.

I chose not to delve into the story and the meaning of the film. It’s just too weird and complicated to understand watching it the first time. I think the best way to judge a film like this is to see if that sort of genre appeals to you. Are the visuals cool and original. Did the actors make the characters come alive. Was this a bore that you wasted money and time on? For me, it was a combination of the above. It’s hard to judge a film like that, cause you will either hate it or really like it. I did my best to be objective and open-minded about it. In the end I just never got into it. Waiting endlessly for something to start making sense–it never happened. When it boils down to it, Gilliam just might not be my cup of tea. If you are a numbers cruncher and appreciate mathematical formulas, while also being into super futuristic films, then you might find Zero Theorem appealing. To spare us some grief, they should rename it to “Zero Sense”, cause I still don’t get it.

One thought on “Review: Zero Theorem”