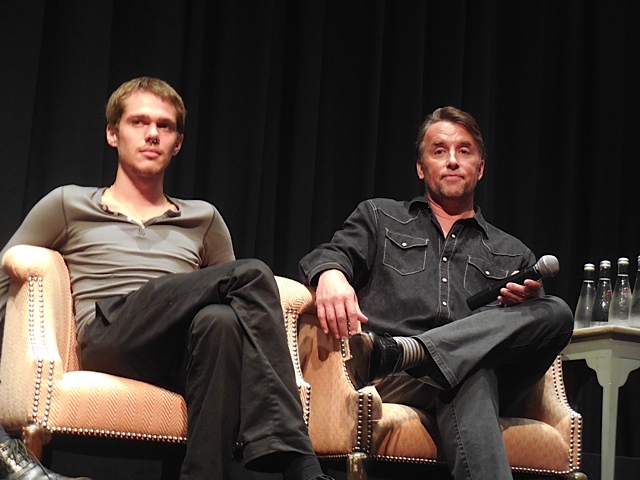 The stars of Richard Linklater’s “Boyhood” – Patricia Arquette, Ethan Hawke and Ellar Coltrane – age in real time in this one-of-a-kind nearly three-hour film. “Boyhood,” which opened Friday, July 11, was shot in short annual increments over a dozen years so the effect as you watch the actors change imperceptibly and slowly is like watching time-lapse photography.

This approach would come across as a gimmick or stunt if the movie wasn’t so good. The real magic of the film is that as you watch time pass and the characters live their lives, you can’t help looking back and contemplating your own.

The three stars and the director of “Boyhood” participated at a lively press conference Monday afternoon to promote the film at the Crosby Hotel in SoHo. Ethan Hawke, who has made eight films with the director, notably the “Before Sunrise” trilogy, was sort of the elder spokesman for the group. “Boyhood” tracks the life of Mason (Coltrane) beginning at age six, and his older, bratty sister, Samantha, played by Lorelei Linklater, the director’s daughter, as they grow up and mature. The story focuses on Coltrane’s character who evolves from boyhood to early manhood amid personal and family dramas, including family moves, family controversies, faltering marriages and re-marriages, new schools, first and lost loves, and good and bad times. Children of divorce, Mason and Samantha are raised by their beleaguered but devoted mother Olivia (Arquette), a hard-working woman with terrible taste in men, and her ex-husband, an immature man with a good heart but little sense of responsibility (Hawke).

One of the first questions to the film was whether it was fun for the filmmakers to meet every year and if they ever had doubts about whether they wanted to finish the project? The production notes stated that at one point Linklater’s daughter wanted to bale out of the project. “Had she not been my daughter I don’t think she would have approached the director and asked, can her character die?” he deadpanned.

He added, “It was really special for us to get together every year. The crew, the cast felt it. We never felt like anyone waivered.”

Hawke said after eight films with Linklater he could speak “collectively” for the group. “We all only grew to love it more and more and more. At first it seemed a little bit like a fun experiment and then it turned into something I loved so much.”

The movie’s power is both in its intimate portrait of a family and its universal revelatory message of what is important in life through relatable events experienced by the characters.  “It’s interesting the movie actually does get a lot of power off our preconditioned experiences of the cinema of thinking something big is going to happen,” Hawke said. “There’s an unbelievable tension in the minutiae of the movie because we’re so conditioned to think, well something horrible must happen. We wouldn’t just be watching some people drive to this university if there wasn’t going to be a car wreck, right?”

Hawke added, “But what I love about that is that’s actually how I feel about my life. A lot of my life is wasted worrying. And the movie actually captures that feeling of, like, well he’s spending the night, he’s camping and they’re building a house and it’s so scary, but it gets like that. How do any of us survive those nights? But there’s something about the way the movie works, its relationship, not just to its own storytelling but the storytelling doesn’t live in a vacuum. It’s in response to other things.”

Linklater described “Boyhood” as “this little collection of intimate moments that probably don’t fit into most movies. They’re not advancing the character enough or the story enough or the plot but they all add up to something much bigger than each little place and each little piece of it so that was kind of the feel to the whole movie, that it mirrors our lives.”

As to whether the film was an intimate character study or a sweeping family epic, the director said it was both. “It’s very specific and intimate but universal within that specific world. It could have been made in any country and any time. There’s such an commonality here.”

The film could just as accurately been entitled “Motherhood” or “Fatherhood” Hawke said. He described it as “an epic about minutiae. That’s what it is. It’s difficult to title because of that. It’s a family seen through one boy’s eyes so that title makes as much sense as any other.”

As for whether it was difficult for the actors to get back in character every year for the brief period they shot their roles, Coltrane explained, “It was a very long build up every year. We’d have a couple months to think about what we were doing and then a solid week of kind of work shopping and building the character and figuring out where the characters were that year so by the time we got to filming we were kind of just already there.”

What facilitated the filmmaking process was that Linklater “speaks to people the way they need to be spoken to. That’s what helps you get ready to play.”

“The most beautiful experience about making this movie is watching Ellar become a creative entity onto himself,” Hawke said, adding, “It was Ellar’s performance and his creativity and passion in the movie that elevates this all.” Although the actor and his character are very different people Hawke explained, “there’s a similar development” as both he and his character grow and evolve from childhood through adolescence and then 18 year-old adults.

Arquette, who is terrific as Olivia, turns in a nuanced and complex performance that is awards worthy. Hawke, who was generous in his praise to everyone on the film, singled out her efforts. “I’m just throwing props your way,” he told her. “I’m surprised that people don’t write about more is that how awesome it is to see Patricia’s character be in this movie and to see a real woman who is a mother and a lover and more than one thing in a movie. I feel so proud to be a part of a movie that respects her character the way this movie does.

“It’s true in life. We see it all the time, but I don’t see that woman in movies. I don’t see her. She’s in the background. One of those characters or just kind of in the background or ancillary elements to give some encouragement in some way to some scruffy guy. This is a real three dimension human being and it was soexciting and the woman in my life who see the movie so appreciate it.”

Hawke added, “I just love her. You can’t pin her down. Oh she’s a good mother! No, wait! Actually that was not a great decision. She’s not just good, she does stupid things and smart things. We’re used to people in movies being one thing, all the time.”

Arquette explained her technique. “In acting you have to get past your own head and your own ego and all of these fucking barriers and walls to just get to a place where hopefully you can be present enough in a scene with someone.” She added of the collaborative process, “I trusted the process. It was jumping into the void from the get go but when you’re in the right hands and you jump into the void together really great things can come of it.”

Ultimately, the director said, the movie “was always going to be a portrait of growing up but also parenting and aging. That you don’t quit growing up, especially once you’re a parent.” Hawke and Arquette’s characters are bumbling through parenting as this was happening in real life with the actors and director. “We had ourselves as parents,” Linklater said. “During this film we had five children born between us and that was just an ongoing part of life.” At the same time, “ You’re thinking of your parents once you’re a parent yourself.”

The movie mirrored what was happening in the lives of the actors and director.

“We didn’t want anything to feel like it wasn’t earned or tethered to some sort of reality. I don’t think there’s anything in the movie that didn’t come out of my life or their lives,” he said. His hope was that the film opened the audience up to the possibility of seeing the connection between their lives and that of the characters in the film. “Once you get to this thinking about life in general and your own life and loved ones and your own experiences, triggering all kinds of wonderful things I hope, painful and wonderful.”