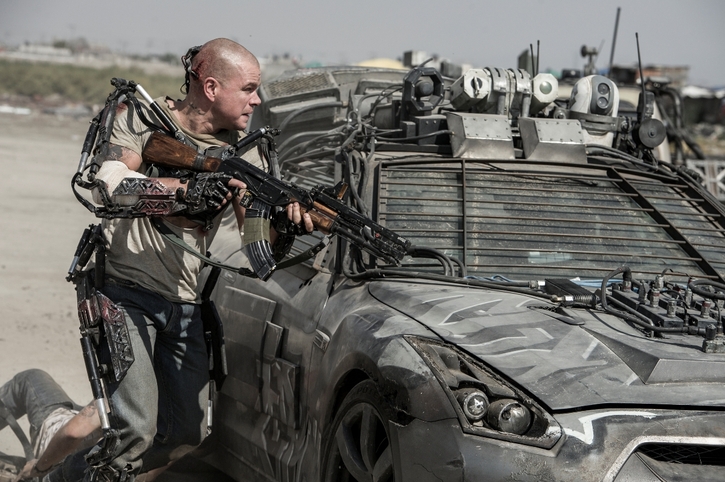 Elysium is a science fiction film, written, co-produced and directed by Neill Blomkamp. The film has a runtime of 109 minutes, is rated R, and was created on a semi-modest budget of $115 million. Most notably it is Blomkamp’s second feature film, following his release of District 9 (2009). District 9 was a low budget, independent science fiction film that was critically praised and because of its extremely low budget of $30 million, was garnered relatively successful. Elysium was highly anticipated as a result of this, as the film was big budget and had Matt Damon and Jodie Foster starring in lead roles. The film also reunited Blomkamp with Sharlto Copley playing one of the film’s villains, as well his production crew of Editor Julian Clarke, production designer Philip Ivey, and cinematographer Trent Opaloch (all of which previously worked on District 9 as well). The film is set in year 2154, which presents a world now ruined due to overpopulation and disease. The aftermath has left society divided up into two classes of social structure, the extremely wealthy and simply put, everyone else. There is no in-between class, as the wealthy simply have everything, they create and improve only for themselves, and they monetize both literally and figuratively. The working class structure now in place is meant strictly for the bottomline where efficiency is robotic and humanity is discarded. Everything is marginalized, down to the universal care and well being of everyone else. Those who live on Earth work to make do, resort to crime, or simply hope and wish. That one day they can buy a ticket to Elysium.

On the opposite end, Elysium is a highly advanced space station, which hovers just on the outskirts of Earth created by the Armadyne Corporation. The wealthy live there, separate, completely isolated from the ruin and dirt of Earth. It promotes extremely luxurious living, absolutely clean air, and a truly sophisticated society with robots providing servile assistance as well as security to all residents. But the real elegance of Elysium is within their health care system, where advanced Med-Pods provide the promise of prolonged life, complete freedom from all types of illness: irreparable bones/limbs, cancer, whereby any/all known human weakness is/are cured immediately. Living on Elysium is so exclusive, as a resident you are genetically engrained and identified. That’s the world the film Elysium presents and more so specifically Blomkamp creates and delivers. It stars Matt Damon in the lead role of Max Da Costa, whose life is presented in both (primarily) present day and through flashback as an orphan who wishes to one day live on Elysium. In order to get to Elysium, Max growing up lived a life of crime as a desperate attempt to get what he desired. He is well known as a legend amongst those he used to associate with, however has since then moved towards cleaning his life up after doing time in jail. Max works on the production line of the Armadyne Corporation, mass producing the robots which police the Earth and serve the residents of Elysium. Through an accident at work one day, Max is left for dead after receiving a full dose of radiation poisoning and is given only five days to live. Desperate to find a cure for himself Max goes back to his life crime trying to buy a ticket to Elysium with the help of his friend Julio (played by Diego Luna) and their known associate Spider (played by Wagner Moura).

It’s here the supporting cast gets introduced along the way, with Frey Santiago (played by Alice Braga) who was Max’s childhood friend, now a nurse with her own problems with a terminally ill daughter Matilda (played by Emma Tremblay); John Carlyle (played by William Fichtner) who is the Head/CEO of the Armadyne Corporation; President Patel (played by Faran Tahir) who governs the society of Elysium and (assumedly) Earth; Secretary of Defense Delacourt (played by Jodie Foster) who is an extremist working to continually ensure the longevity of life on Elysium at all costs; and Agent C.M. Kruger (played by Sharlto Copley) who is a sleeper agent of Elysium living/residing on Earth taking care of any wetwork operations necessary. (Kruger absolutely steals/potentially carries the movie as one of the most memorable villains I’ve seen on-screen in a long while.) With the cast set, the film revolves around the premise of the haves and have-nots, where individuals like Spider have continually worked towards taking from Elysium what they do not give, nor share. It’s an odd contention how class structure has changed over time, but that’s the point of the film and the purposeful commentary by Blomkamp as he has gone on the record saying “No, no, no. This isn’t science fiction. This is today. This is now.” To which point, despite its extreme point of view of an almost subjective definition of heaven and hell. Elysium as a film does a good job of presenting its world initially but fails to keep its supposed rigid class structure in line.

It’s a point of questioning throughout the film which prevents Elysium to give that thorough punch to completely sell the audience on its story. There is a beautiful desperation that Blomkamp never fully capitalizes on, this real sense of revolt against the privileged that through their exodus of Earth have lost their own humanity as well. (I called them essentially giant space assholes.) It might sound like I’m asking for a social commentary here (I’m not), because that was already done through the pseudo documentary style approach of District 9. I just would’ve liked to have seen instances of conveniences tightened up where for example, plans by other parties seemingly worked perfectly in correspondence with another party’s plans when it was never fully intended to operate that way at all. Yet they did in film and in story. Even in the action there is a continued change-up from slow/calm to frenetic direction which becomes obscure as the audience watches on. As moments of quick cuts are furthered with motion blur to strangely hide or un-situate the visually impressive background Elysium gives us. (It’s almost Matt Damon brought along Paul Greengrass’ shaky action cam from the Bourne series.) And it’ll be these moments of action where scenes are easy to follow and great to see, which are suddenly and abruptly zoomed in too tight and uncertain. For the film it’s when something good could become great, but instead just remains good or even drops off to average. And that’s the confusion of Elysium, as it presents a legitimately interesting/original concept, mixes in a standard story, and has great acting and fantastic visuals, and overall plays out in an average manner. If Elysium was meant to be simple it would’ve been, in an almost Robin Hood-esque device of where perhaps Max was a protagonist where he robbed from the rich and gave to the poor. And that’s what he did day-in/day-out, with the class structure already in place, as he knew life on Earth was never going to be great. Show that, do that, have fun with it in that regard. But the point would be to make it bearable or as best as possible for him and the others whom he could give to. And it would’ve played better to Blomkamp’s notion of wanting to make an enjoyable popcorn film. And also it still would’ve worked if in some way Max gets critically injured and it becomes a turning point where him wanting more meant doing the right thing than being subtle, as after all, Elysium presents extremes. With how strict the film was to present its ideology I just wish it was pursued more so through the storyline, not as a romanticized allegory but to really drive the point of the working/existing class left on Earth versus the wealthy on Elysium. Instead Max’s character seems almost thrown in, tied only by his hopes and dreams as an orphan. Given the populace of the Earth, anyone could’ve been Max in this movie (interesting fact, Eminem was originally and initially cast for the role) and that should’ve been the point. Where the eventual weight and direction of where the story took us, meant more, especially with how the movie opened in broad and exploratory manner. Whether it’s Blomkamp taking the film in a more personally comfortable area with how it eventually progressed in a singular more restrictive tone. It ends up being a little surprising, questionable, and slightly disappointing. I understood how things were and I enjoyed it. I wish the film would’ve been a little braver in its overall portrayal for the sole fact, everything was already there, but seemingly was unrefined or undercooked.

In the end, Elysium is a good movie and is a welcomed addition to what will hope be Blomkamp’s growing filmography. If this makes sense, Elysium is definitely more my type of movie than District 9 was but I score it much lower on the scale comparatively.