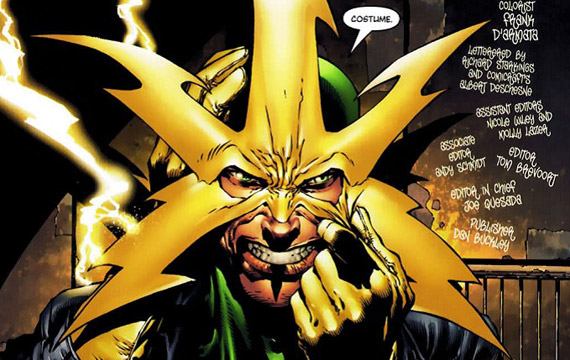 I still remember the internet backlash toward Bryan Singer when it was first announced that the X-Men wouldn’t be wearing their comic book costumes in the film.  I bring that up cus the site I read the news on did, and because Foxx is about to withstand the same hate with the news that his Electro costume WON’T be green and yellow:

It won’t be green and yellow. It will be a different color. They (the producers) want something for the future. They want to have it more grounded and not as comic bookie, so it won’t be green and yellow. They want to try new things, like a liquid rubber and things like that, and there are all these bolts and stuff in my arms when they are hanging me upside down and trying to figure out what happen. How did he become this way? So, it will be some new stuff.

Before I even address the immediate issue I want to first say this:  Are you really surprised?  The damn Electro costume is a fashion nightmare even in the books and the idea of translating that star thing he wears as a mask would be ludicrous to even consider.  That said, the colors themselves are a bit iconic for the character.  I don’t want to see Spider-Man without the red and blue, why come Electro can’t wear his green and yellow?

I’m not entirely surprised nor am I enthused by this news.  I was not a huge fan of the designs used in the original Amazing Spider-Man film and the idea of these guys just outright designing original stuff scares the hell outta me.  That said, I’m sure Ryan will see nothing wrong with this.  If anything I expect them to draw inspiration from Marvel’s “Ultimate” version of the character, as shown below.  That’s all for now…